Bongwater - The Power Of Pussy 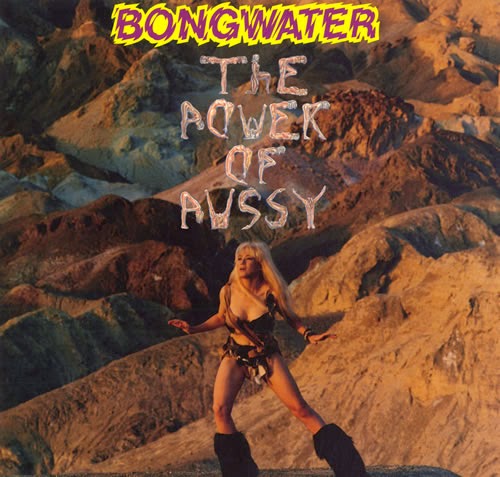 Bongwater were the creation of New York indie oddball, producer/musician Kramer, and performance artist Ann Magnuson, and for a few years in the late 80s early 90s issued a string of 4 eclectic left field albums, before splitting up apparently because of money arguments.

The Power Of Pussy was their 3rd opus, released in 1991. As the title suggests, the album is a treatise to the glories of sex, kinky and otherwise. Because of the era in which it was released there is an AIDS subtext, but without any moralising.

So far, this all sounds rather bleak, but trust me, it is anything but. Be prepared to be taken on a journey through the sleazy underbelly of dubious amoral practices in 90s USA. You can almost see the steam hissing out the manhole covers!

Kramer's music (ably assisted by Dave Rick on lead guitars) covers all kinds of bases, from early Floyd psychedelia, hoe down, folk, indie rock, while Ann Magnuson's lyrics are shot through with black humour, often crossing into the surreal. The title track contains the line "Some have teeth, some have hair,...some look like Cher". I leave that to your imagination! She is also famous for her monologues set to Kramer's music, the best, or certainly the most bizarre of which is the track Chicken Pussy, a drugged-up ditty about a romp with "...the fat lead singer of Canned Heat...my next door neighbor Jimbo, and his wife, who is a chicken..."! Made me larf out loud first time I heard it.

This is the kind of off-the-wall oddness to expect...

Bongwater also had a penchant for wilfully odd choices of cover versions. There are two on this album, the poignant and much covered 1950s standard Kisses Sweeter Than Wine, apparently dedicated to Ann's brother who died of AIDS, which is backed with some fine banjo picking, and Dudley Moore's Bedazzled where Ann Magnuson counterpoints the cheesy lyrics of the original with her own put downs, which works a treat.

The last song on the album is the 10 minute epic Folk Song. Prog fans will recognise the intro from Roundabout, a classic Yes song, but from then on it just gets weird. Ann's stream of consciousness lyrics eventually settle into a speed freak's sermon featuring her take on the role of women in the modern world, eventually reduced to "Sucking and shopping".

This is the kind of album you can't help but keep going back to, hearing something different every time. For pure inventiveness you'd be hard pushed to beat it.

A blast from the past this one. Released in January 1971, I bought this from a remainder bin in 72 or 73 and I still play it now.

Although following the power trio format popular of the time, their sound is actually quite distinctive with a definite psych/prog crossover element. As it says on the spine of the original LP "Play It Loud" (perhaps the album was originally going to be called this, but Slade had beaten them to it?). IMO The Groundhogs sound like their biggest influence, which is no bad thing, but they do have their own sound.

The side long track Journey To The Inside Of The Sun has some great interplay, and considering these lads were only 18 at the time, it is quite an achievement. The first part of this epic, Sweet Leaf, has some good boogie action, interspersed with quieter psychy phases, follwed by Rocket Ride, played in a Groundhogs style. The track finishes with I'm Coming Home which although a little disjointed is still a decent work out.

Side 2 starts with the great You Mystify, with some basic time changes and lots of reverb on the chorus vocals. A great bit of fret wizardry too. Tools Of My Trade is very Cream like in places, but with enough style of its own to shine. builds nicely in the middle section. Things slow down for My Heaven which is the most psychedelic of all the songs and has some nice instrumentation. The closer Birdcatcher, has good riffage and a very odd ending fading away with flute and lazy hand clapping. Very stoned.

As with most Vertigo acts of the time virtually nothing was spent on promotion and unfortunately Clear Blue Sky did not get the chance to develop as they should have done, and split up soon after, only reforming many years later.