Amazingly, a volume two of this nonsense appears, so soon after volume one too! Whodathunkit?

The Who - Live at Leeds 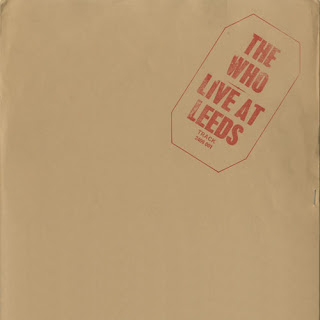 The second album in my occasional series is another I have never owned, and for good reason, as I have never liked it, or so my memory thought. I suppose I got off on the wrong foot with this one from day one, my mate's older cousin finding much mirth in my naive assuming that the title of his new purchase by The 'Oo meant that the band lived in the Yorkshire city. I was only 12, is my excuse!

This may have clouded  my judgement, as I seem to recall that Pete Townshend spent most of the album proving he isn't a lead guitarist. To be fair the episodes of noodling are kept to fast and furious minimum, most of the time he's just chopping away in that familiar rhythm guitar style of his, rather well it has to be said.

The conventional wisdom is that this is the best live album ever. Well it's far too late for me to even begin to work that one out, but one thing I find odd is the track selection. At a mere 37 minutes long, the album contains three cover versions on the rather short 15 minute first side of the original LP, and side two ends with the throwaway Bo Diddley rip off Magic Bus, when the band by this point had accumulated a pile of much stronger self-penned material that they could have included. Tommy was played in full at the gig I believe.

I suppose they had to include the near quarter hour long sprawling mess of My Generation, it being the expected climax of the gig. Expanded here to include parts of other songs, and Townshend leading some general messing about, it seems the band had taken a leaf out of the new kids on the superstar block Led Zeppelin's book, and that band's excesses on Dazed And Confused, always a track I skip on Zep live albums. All that's missing here is a violin bow. However, I am thankful for small mercies, as at least Live At Leeds doesn't contain a drum solo!

Long-form wigouts although the flavour of the day didn't suit The Who, who were always song-oriented, and some damn good ones they had too. Shame more of them are not on Live At Leeds. Star of the album is John Entwistle whose thunderous and dexterous bass playing stops it falling apart as Townshend and Moon try to outdo each other in the splenetic fury stakes.

I listened to this album twice for the purposes of writing this, and that's probably doubled the number of times I have heard it in full since the early 70s. In conclusion, it's not as bad as I remembered, but I won't be rushing to buy it. The best live album ever is Space Ritual by the way.

Thanks to my mate and similarly opinionated music-head Leo Trimming, without whom, etc...
at September 25, 2018 No comments:

Hi there
It's been a while since I posted anything here, so all my audience, all three of them, have wandered off over there somewhere, ne'er to return. The only visitors to this blog now are bots, worming away in a futile imitation of real life...or summat.

Anyway...this here thing will be an intermittent series of revisits to ancient records that have been gathering dust and spiders in my memory. Some may have been significant to my musical and sundry other forms of development, some will not. First up is: 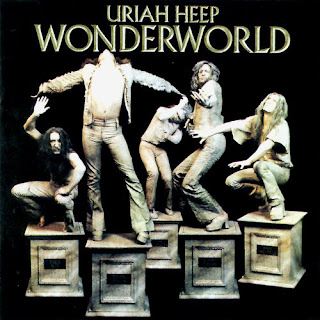 This is an album I had largely forgotten about, until I happened across a thread on Farcebook discussing Uriah Heep's new album. They're still going? Blimey, Mick Box must be about 107! As is the nature of these things, the discussion meandered and ventured into discussing this album.

Released in 1974 it was the Heep's seventh album, and the last with what would come to be regarded as their most consistent (you can't use a word like "classic" where a band this lumpen are concerned!) line up, as sadly bassist Gary Thain was shortly to become a victim of his long addiction to H. If we are to believe Wikipedia, the band handled his problems with Yes-like sensitive pragmatism!

"During his last tour in the United States with Uriah Heep, Thain suffered an electric shock at the Moody Coliseum in Dallas, Texas on 15 September 1974, and was seriously injured. Due to his drug addiction he was not able to perform properly, and was fired by the band in early 1975".

I never actually owned a copy of Wonderworld, a mate recorded it on cassette for me, and I am now listening to it (on YouTube I hasten to add) for the first time in at least four decades. Gawd, this takes me back!


Taken on its own it's not a bad album, although very much of its time and not particularly memorable. Where it falls down is that by 1974 Heep had hit on a formula, and it sounds like a fading shadow of what went before. It sounds a tad tired, a rehash of past glories.

Also by 1974 my musical tastes were broadening fast, having succumbed to the educational delights of John Peel. Heep's somewhat plodding straight ahead rhythms and Byron's and Hensley's sixth form poetry-as-lyrics now belonged to an age when I was but a child.

I got as far as Something Or Nothing, track six of nine, so I did quite well. By then it was giving me a headache so I had to turn it off.

Expect the next installment soon... or not.


Thanks to Jan Erik Liljeström for the Heep thread that inspired me to do this!