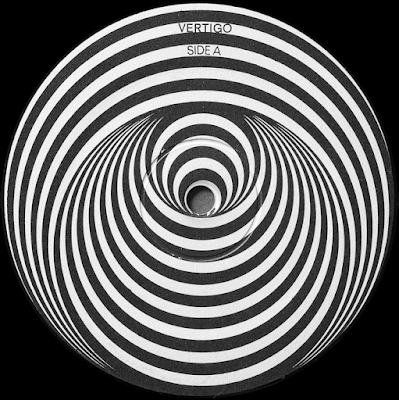 My pride and joy is my small but perfectly formed record collection, which consists of around 1000 fragrant slabs of vinyl. The sun around which it all spins on the turntable of life (woah, blimey!) is the section reserved for albums released on the famous Vertigo "swirl" or "spiral" label, the underground subsidiary of Philips, set up in the hope of rivalling Island, Harvest, Deram etc in the burgeoning underground rock scene of the time. No genres back then, it was "underground" or "pop"...ah, simple times!

The first proper record collecting I did was as an almost-teen in early 70s Wellingborough, a sleepy little town in a sleepy little county hidden in the middle of our then sleepy sceptered isle. Tucked away on the periphery of the town centre was a seedy department store-come-supermarket run by a local chancer. The store was located at the back of the town cattle market, itself the site of much childhood nefarious activities, and if you visited the store on or near livestock auction days in the summer you soon became aware of a somewhat distinctive odour. Inevitably, the store and the cattle market are both long gone and the land is now the site of a block of flats, I believe. Within those hallowed portals there was a remainder bin stuffed with vinyl goodies by bands so obscure, even their mums didn't know they existed. A fair few of these were on the Vertigo label, and being an impoverished boychild, funds were tight, so it was fortunate that firstly the prices of those goodies ranged from 25p to a heady £1.50, and secondly that the price stickers were...ahem...easily swapped. Among other gems on the RCA Neon label, B&C, etc, my first and last forays into a life of crime got me albums by Gracious!, Patto, Legend, Cressida, Manfred Mann's Chapter Three and others for as little as I could get away with, as long as the overweight and limping store detective was not in the vicinity.

Sigh...right, snapping myself out of the nostalgic reverie it's back to the here and now and the task in hand. Of the 88 spirals released here in the UK between November 1969 and the summer of 1972 - there were a few non-UK releases too - I have all but one, the ever elusive self-titled album by early fusion band Ben, copies of which now change hands for ridiculous amounts of money*. I have consoled myself with an Arkarma exact repro, as it is highly unlikely I will ever consider spending upwards of £750 on a 12" vinyl record to be justified expenditure.

Most if not all of those albums were purchased back in the swirling (heheh) mists of time purely on the attraction of their gatefold cover designs, as there was little or no chance you would hear the majority of these bands on the radio or on the only TV programme that catered for the underground scene, The Old Grey Whistle Test, these then being the only sources of "try before you buy". Sumptuous gatefold covers were the rule, and even the occasional massive fold out designs appeared, despite the average band promo budget being about 5p. That last fact explains why a few real gems sunk without trace. Many of these eye-catching designs were by Marcus Keef, better known simply by his last name. All the covers are on the Vertigo website, so go feast your peepers on some classic work.

Around two-thirds of the 87 Vertigo spiral LPs I have accumulated over the years, mostly in a mad spree in the latter half of the 1990s, are UK pressings. The ultimate source of reference for the serious Spiral collector is vertigoswirl.com where you will find all the information you will ever need and then some, as well as links to all the original vinyl releases in all formats from all over the globe on this relatively short-lived label design. Here I will concentrate on those UK LP issues, and I will give my own short summaries of each release, followed by an entirely subjective mark out of 10.

* "...ridiculous amounts of money" in the record collecting world is anything over £500. I've never understood why rare records are valued far less than rare comics, both artforms being reflections of popular culture and equally as valid...or as trashy, depending on your viewpoint.

This first part will cover as many as is feasible before my better half tells me I should be doing something useful. The list is in chronological order of release, with the catalogue number included for any vinyl collecting nerds out there.

A cracking combination of hard rock and jazz rock from the now well known line up of Hiseman/Greenslade/Heckstall-Smith, with more than capable back up from guitarist James Litherland. The majority of spirals are debut releases and some show their naivety. This however was the band's second album, after the fabulous and if I'm honest even better debut For Those About To Die We Salute You on Fontana. It rocks, and there's a side-long epic. What's not to like?
7/10

Band formed by gruff voiced pedal steel player Glen Campbell (obviously not that one) after the collapse of Peel favourites The Misunderstood. An album of rollicking R&B perhaps best known for the hit cover of Bo Diddely's Who Do You Love, and of course for having the most gross album cover on the label. It cannot be unseen.
6/10

Rarely spoken of, even by Manfred fans was his and bandmate Mike Hugg's excursion into jazz rock that lasted for two albums, both on the spiral label. Why these albums are so overlooked is anyone's guess as they are both prime examples of the then popular genre. Big band arrangements with a rock sensibility allied to instrumental freedom make this album in particular one my favourites on the label.
8/10

VO4
Rod Stewart - An Old Raincoat Won't Ever Let You Down

Rod The Mod's first solo album before fame beckoned. Backed by a stellar cast, including two of his bandmates from The Faces, Rod turns his hand to a mixture of self-penned rockers and ballads, and a handful of covers, including Mike D'Abo's Handbags And Gladrags made famous decades later as the theme tune to Ricky Gervais' wonderfully cringeworthy comedy The Office. Not a bad album, it has its moments.
7/10


The band and the album that invented heavy metal...'nuff said.
9/10


This was one of those albums I found in that bargain bin, and it's a bit of a classic. Classy songwriting married to an early pop-prog hybrid sound, dominated by keyboards, all done with a complete absence of bombast, too. Very nice indeedy, and still a favourite.
8/10


We have now reached the end of the "VO" run of catalogue numbers, so here would be a good place to end Part One...more to follow.