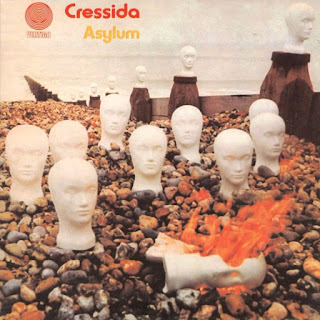 Part Three reveals an overall musical quality dip, unsurprising given the number of "underground" labels now resorting to hoovering up the average bands by the denim-clad bag load. Our trawl is redeemed by a couple of real gems by unknowns. Also my "bargain bin" finds did not stretch much past the end of 1970 as far as release dates go, sadly, so from here on in the majority of these were bought during my manic collecting phase in the latter half of the 1990s. Therefore there's less chance of my judgement being clouded by nostalgia.

Graham Bond was responsible for a large part of the birth of the British jazz-rock scene, giving Ginger Baker, Jack Bruce, and Dick Heckstall-Smith their starts, among others. That was via his influential Graham Bond Organisation in the mid 60s, but by this album he had lost himself to Occultism, and Holy Magick is the first of two spiral LPs devoted to the dark arts. Obviously this is way off with the faeries, and musically Bond seems to have become a flabby Brit version of Sun Ra. The inner cover features several pictures of a be-robed and bare chested Bond waving a sword about in front of Stonehenge, natch, and attempting to repel the tides. It's not pretty.
4/10

Guitarist Norman Barratt and his band produce some nascent proto-prog dominated by the keyboards, sax and flute of co-founder John Hughes that serves to raise this debut album above the prosaic. Eye catching cover from Hipgnosis displaying hints of their style to come.
6/10

6360 024
Keith Tippett Group - Dedicated To You, But You Weren't Listening

The first Vertigo album out in 1971 in this list sees the already respected jazz pianist assemble a band consisting of the usual suspects from the jazz/rock crossover world including Robert Wyatt on the drums and a young Gary Boyle on guitar. Tippett puts together an album of typically left-field jazz-fusion tuneage. Enjoyable in places but not spectacular, and certainly less than the sum of its stellar cast list. An intriguing Roger & Martyn Dean cover completes the package.
5/10


If anything, even better than the debut. This album exudes classy songwriting from every pore, and instrumentally Cressida were in no way lacking, either. Sad that they went the way of so many bands during this period, straight back to nowhere.
9/10

Unimaginative clichéd organ-led rock by a band of unknowns who rightly stayed that way. And the lyrics, oh Jeez, the lyrics..."People in black run around in the night so they can't be seen". Yep, that good! The striking cover by Design Machine is about its only redeeming feature.
4/10

Another album of quality jazz-rock from Ian Carr's band, and like the debut it is dominated by Karl Jenkins compositions. Inevitably a very slight quality dip follows the stellar debut Elastic Rock, but similar amounts of fun can be had spotting which riffs or even whole tunes ended up on Jenkins' later Soft Machine albums. Another early Roger Dean cover completes the package.
7/10


Leaps and bounds ahead of their steaming debut, Salisbury contains an almost side-long epic that includes an orchestra, for no good reason at all. Supremely daft and still lovably club-footed, Heep lurch on into the 70s hinterland, and never has a band felt so at home in an era, not that the press ever understood. The title track also contains Mick Box's second best guitar solo, finger blisterin' it is! Oh...and Bird Of Prey...if that doesn't make you at least think about headbanging, someone's switched your lights out. Completely OTT and bloody marvellous!
9/10

Punky visceral jazz-rock fronted by the distinctive voice of one Anna Meek, who declaims in strident fashion throughout. Imagine Lene Lovich fronting a voodoo jazz band under the influence of the 'shrooms. It dares to be different! A winning and quite fittingly nasty cover, a large stylised painting of a rotting apple.
6/10

Afro rockers led by Mongezi Feza and Dudu Pukwana, or at least they are the names I recognise, the former later having a long if occassional musical association with Robert Wyatt. Assagai produce fairly unspectacular afro-pop-rock, and with a mix of originals and covers including Hey Jude, this is all nice and poppy and obviously riding on the coat-tails of Osibisa's then success.
5/10

One half of late-60s psych pop duo Nirvana, by 1971 Patrick Campbell-Lyons was well esconced in his main role as Vertigo creator Olav Wyper's A&R man and in-house producer, carrying out knob twiddling for many a Vertigo band. However, he always kept the name Nirvana going, and this album proved to be the band's only outing on the spiral imprint. His partner in the original Nirvana was one Alex Spyropolous, who is nowhere to be seen on this sprawling record where Patrick is backed by fellow Vertigo acts Jade Warrior, Sunbird, and others, including a pre or just-Crim Mel Collins.

Consisting of two side-long song suites that take in everything from cosmic jams to English music hall, via some decent songwriting, to say that Local Anaesthetic lacks focus just about nails it. Another great and enigmatic Keef cover upon which we can feast our eyes is worth a mark on its own.
6/10

The first Patto album will always hold a nostalgic place in my affections, but if anything, this second effort, also produced by Muff Winwood is musically even better. A raw emotive energy is shot through these grooves, and even more than the debut that is the sole reason it doesn't all fall apart. Ollie Halsall is on fire throughout, and this is a prime example of music making while flying by on the seat of your pants. And tell me You, You Point Your Finger isn't at least as good as any ballad Paul Rodgers came up with for Free, and I'll tell you to keep listening until the penny drops. Possibly Mike Patto's finest five or so minutes.
This album is utterly brilliant!
An ultra-fragile tri-section foldout cover designed by the band and painted by Roger Dean makes this one of the hardest to acquire with the cover in anything approaching decent condition.
10/10


Patrick Campbell-Lyons' protegés and something of a Vertigo houseband Jade Warrior at last get to make their own record and a belter it is too. Stripped back instrumentation under Far Eastern and African influence combining with ethnic percussion and flute, plenty of classic instances of quiet/loud contrasts crop up throughout with quiet contemplative phases giving way to ballsy left-field rocking, and vice-versa. A class act.
7/10

Good album of West Coast folk rock that just shows how far behind his former Fairport bandmates had left him. Heck, there's even a cover of Reno Nevada on here! Sandy Denny and Richard Thompson appear here along with other Brit-folk luminaries of the day, and Keith Tippett, oddly enough. Despite Thompson's great guitar playing it never really gets out of second gear, which is a shame as there are some decent songs on this record.
6/10

May Blitz split up soon after this, their second album. Just as well as 2nd Of May is the sound of a band rapidly running out of ideas.
5/10

Why would a bunch of ex-pat American downhome country types, led by Roy Orbison's former guitarist be living in a cottage in Hertfordshire? Nope, me neither. Pleasant enough but instantly forgettable hayseed dixie fare, somewhat out of whack with the rest of the label.
5/10


Whether it's "Nucleus", "Ian Carr with Nucleus", or simply just "Ian Carr" emblazoned on the cover, the "swirly" era band is largely similar, and the music they produce is the highest quality early jazz-fusion. Great cover, too, by "B.E. Ltd". As this was the group's third album in under two years, one suspects a lot of it was recorded at the same sessions.
7/10

An improvement on the debut, with better instrumentation, and the songs have improved too. I know not how this band fared after the "swirly" era, but they never rose much above fair-to-middling during their time on the iconic imprint
6/10


Well, that's it for Part Three, same place for more, next week...