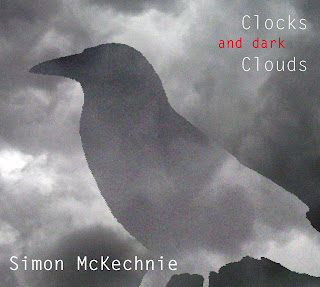 You know you've got a proper prog album in your hands when the CD cover states "All words and music by Simon McKechnie except....4. music Simon McKechnie / words Albert Einstein." I wonder if Einstein has ever received a direct writing credit on an album before?

As if echoing the pioneering scientist's convoluted theories, the music on Clocks and Dark Clouds is highly complex, while, unlike Einstein, unless of course you're a math geek, being at the same time most enjoyable.

The gestation of this album was somewhat unusual. London based musician Simon McKechnie (pronounced "Makeknee") was suffering a rare neurological condition whereby the recovery process precluded any analytical work such as reading or even TV watching. What he could do was lie in bed and jam away on his guitar, and this is how these songs were born. The recording sessions were no easier, as a spinal problem meant he had to record all the instruments in a semi-prone position. Arising from all this difficulty, the album is as complex a beast as you would expect the end result of fired up thought processes from a brain coping with trauma to be. Thankfully Simon tells me he has recovered sufficiently that his next album, a prog epic concerning the alchemy of Sir Isaac Newton, will be recorded standing up, thus defying gravity, ironically enough. No gigs are possible as yet, unfortunately.

No YouTube clips, but listen to samples HERE while reading my nonsense...

Intriguingly for an album whose provisional title was Time, all the songs referencing that subject in one way or another, the first four songs are for all intents and purposes the same length. Probably a coincidence, but a spooky one nevertheless.

Cooking up a mix of influences ranging from Yes, Rush, Crimson, Zappa to The Mars Volta via Be-Bop Deluxe, Simon has come up with a more than passable debut. When Simon goes down a Yes avenue as on God Particle he thankfully does not attempt to create a track missing from Fragile, but easily stamps his musical identity over his own multi-tracked vocals reminiscent of Anderson and Squire at their most soaring. The first verse of this one is a quote from Albert Einstein, hence the co-writing credit, and somehow manages to sound completely natural without being in the slightest po-faced or coming across as pseudo-intellectual. The music starts off very angular, backed by the intricate but fully appropriate drumming of friend and musical collaborator Adam Riley. Adam, normally a jazz-fusion drummer, adds a Bruford-like vibe to proceedings, and is obviously an above average tub thumper.

All the instrumentation and vocals throughout are contributed by Simon, but the skill in the production department, courtesy of Jon Astley, who has a production CV as long as a spool of tape (whoops -showing my age there), is of such a degree that it mostly manages to sound like an ensemble.

This is an old fashioned album in that such is the tricky and complex nature of both the lyrics and the arrangement that you will have to sit down and listen to it, for it will not work as background muzak, a sorry fate that befalls most music these days, in a world were music is no longer art, but commodity.

Gilgamesh legend and odd time signatures collide in He Who Saw The Flood, sequencers and synth melodies melding with fast guitar patterns. This tune goes through several changes during its near ten minutes but stays the right side of disjointed, although, blink and you'll miss something.

The Emigrant is a poem by Joseph Campbell set to music, and along with Edgar Allan Poe's The City In The Sea, shows that Simon is not only well-read, but also not afraid to bend the words of the greats to his musical will. The City In The Sea is set to a suitably menacing and brooding anti-riff that soon morphs into something else entirely. The torrent-like flow of words, scanning impeccably, is where I get The Mars Volta reference from in case you were wondering, but musically this is surprisingly individualistic, wilfully so, probably a result of illness and creativity doing battle. They do say that one's best art is born of adversity, and this is no exception. This is my favourite song on the record, and perfectly spotlights Simon's muse.

The Emigrant is a slower, more conventional affair, and features some nice effect enhanced guitar work. My only criticism of this particular track is the guitar sound on one solo about halfway in is a bit jarring and disrupts the flow a tad, otherwise it's a nice thoughtful song with which to end the record.

Lyrically and musically labyrinthine, any prog fan who likes to chew the musical fat, as it were, should enjoy this engaging debut by Simon McKechnie, and I look forward to the "Isaac Newton failing to make gold out of fallen apples" epic!

Line up:
Adam Riley - drums
Simon McKechnie - everything else