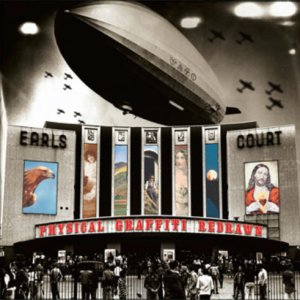 As everyone knows by now - frankly if you don't, you must have been living on Ganymede these past few months - the new reissue of Led Zeppelin's sprawling 1975 double album Physical Graffiti is now available for our delectation. MOJO have gone to town on it in their latest edition, including a cover versions album of the classic as its cover CD.

If I were forced to take only one Zep album to the mythical desert island, it would most likely be Physical Graffiti as it runs the gamut of every stylistic twist and turn that the unmatchable band went through in their relatively brief career.

Assuming the guitarist knows the chords and the singer isn't tone deaf, it would be difficult if not impossible to do a bad cover of one these songs, so strong and instantly recognisable as they are to any self-respecting rock fan, and this tribute album does not disappoint and is a fun ride. So, here goes...


1.  White Denim - Custard Pie
Kicking off the album is this rumbustious piece of blues-rock. There are two ways of attempting cover versions - do them straight, or reinterpret in a new way. Few acts on this CD are brave enough to do the latter, and Australian psych-rockers White Denim are not one of them. Sensibly they do not attempt to repeat the thunderous Bonzo reply to Percy's last "drop down", but they do manage to slightly psychedelicise the Pie. The track is let down by a weedy production.

2. Blackberry Smoke - The Rover
According to MOJO, "the hottest hard rock band on the planet right now", although not a name I had come across before. They play it straight, but again it pales in comparison to the original. What this CD is telling me only two tracks in, is that Zep's sheer power is hard if not impossible to match.

3. Miraculous Mule - In My Time Of Dying
One of those blues/gospel standards that Zep were so good at stealing...sorry...adapting, here given a proper heavy then country gospel kicking by a mule. Not bad at all.

4. The Temperance Movement - Houses Of The Holy
Suitably, given this band's name, this is straight.

5.  Son Little - Trampled Underfoot
The first artist with the cojones to do something radically different is nu-soul icon Son Little, who turns the stomping whiteboy funk metal of the original into a languorous swamp soul-blues that Dr John would have been proud of. The best track on the album, so here it is:

7. Syd Arthur - In The Light
We are now on to LP no.2 of the original issue, and it is fitting that the opener of side three, and one of Zep's most "prog" songs is covered by the currently feted and nonetheless highly talented UK prog kings-in-waiting Syd Arthur. They use their dozens of effects pedals to practically copy the original, but it's enjoyable enough.

8. Laura Marling - Bron-Y-Aur
A natural choice to cover Page's folk standard, and she plays it with panache.

9. Max Jury - Down By The Seaside
Des Moines new age hippy type Max Jury takes an Americana twist to the wistful original, making it even more blissful. Sounds like The Band fronted by Jackson Browne. Nice!

10. Michael Kiwanuka - Ten Years Gone
A sad song about a past and failed relationship, and a tune that always vied with the more obvious choices for the title of my favourite from the original album. London singer-songwriter Kiwanuka makes the song even sadder, aided by a minimalist accompaniment that swings the focus to his slightly reverbed and powerful voice. Another triumph from yet another name I'd not come across before.

12. Rose Windows - The Wanton Song
A band I've vaguely heard of, apparently from Seattle and on the Sub-Pop label slow this rockin' mutha right down, and with Rabia Shaheen Qazi's soulful Earth-mother croon leading the way turn the song into a smoky psych-blues. "The wheels roll on"...Yes!

13. Kitty, Daisy & Lewis - Boogie With Stu
Whoever these three are, they turn Ian Stewart's showpiece into a skiffle knees-up, mirroring the good time party vibe of the original. No piano, either!

14. Hiss Golden Messenger - Black Country Woman
Takes the country rock of the original and strips it right back, making it even more down-home. Sung from a rickety rocking chair on the porch of a tumbledown shack in Georgia in the as yet unmade video.

15. Sun Kil Moon - Sick Again
Ah...someone I've heard of, if not heard. World-weary and desolate, Mark Kozelek's voice takes the album closer way, way on down, with a suitably subtle and delicate instrumental backing. As different from the original as you could wish, this is a fitting conclusion to a more than decent album.

Physical Graffiti Redrawn makes this month's edition of MOJO more than worth the admission fee. Of course, what this CD really does is make you want to play the original, which was probably the intention...
at February 28, 2015