John Lydon - Anger Is An Energy 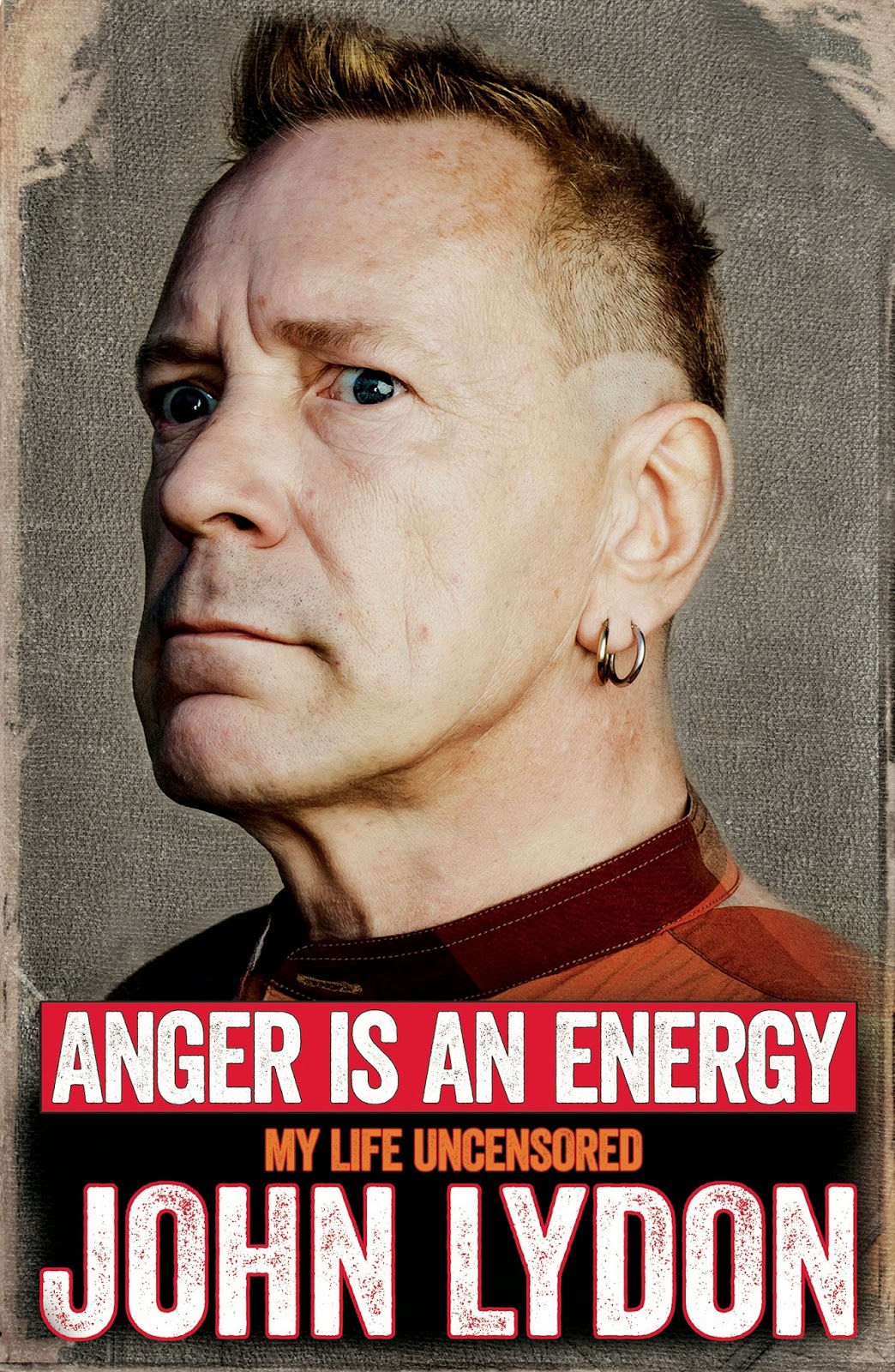 It sure is John, and with the excessive amount of rage that still courses through your system even after all these years, you could power PiL's stage monitors for a year. For such a once slightly built fella, it's a wonder he could keep those massive chips from falling off his bony shoulders. Mind you, just look at that jaw line now! John Lydon is the sort of chap who is probably the epitome of "never meet your heroes" - not, I hasten to add that he would be an embarrassment in the manner of a Morrissey, but that you get the impression he'd bite your head off so much as look at you. Definitely the sort of fella you'd want on your side in a scrap though.

The book was ghost written by Telegraph rock journalist Andrew Perry, whose remit was to keep as close to Lydon's spoken tracts as possible. Sounds like money for old rope to me!

This sprawling and seemingly practically unedited autobiography traces the development of John Lydon the man, from poverty and illness stricken childhood via generational icon and focus of Establishment ire, to star of celebrity TV and presenter of low brow nature programmes and star of comedy adverts for butter. It also gives Lydon another chance, after 1994's first foray into the world of the autobiog, No Irish, No Blacks, No Dogs to rail at his favourite targets, some of whom no doubt deserve it - come on down, Talcy Malcy, a man who was so obviously a flake - but most of whom get it in the neck for little reason. That list would be too long to type out completely, but let's start with Joe Strummer, who seems to be the oft-repeated focus of Lydon's gimlet-eyed glare, and reading between the lines I'd hazard a guess it was simply because he had the ability to tune in to the zeitgeist and thus make The Clash a success. Lydon, being an iconoclast and a major reason why the Pistols were almost wilfully self-destructive (it wasn't all McClaren's fault) was never going to see his band sell out venues in New York for 17 successive nights, was he? Jealous? Very probably, although he'd never admit it. And poor old Glen Matlock, whose only crime appeared to be that he could actually play a bass guitar.

For all that, Lydon has led an interesting and highly unusual life to date, which of course is the stuff of all good biogs. Growing up in grinding poverty in an Irish enclave of Finsbury, north London, Lydon's youth was typical of his peer group, right down to running with the local Highbury football hooligans. A good autobiog is also often enlivened by some unrealistic claims, and Anger Is An Energy is no exception. Johnny tells us, amongst other things, that he was the first serious pop lyricist, and that he practically invented rap and rave culture, and the 5-4-1 football formation. I may have made one of those up.

This is all grist to the mill, and all is forgiven, for although prone to bouts of rambling, a trait of sometimes not seeing the wood for the trees, and an overindulgence in comic book language - phwooooar! - there is much in here beneath the verbosity. The stream of consciousness Lydon lays before us is if nothing else, brutally honest. Absolutely no punches are pulled, and this is another contributing factor to an entertaining and occasionally gripping and hair-raising read. An early bout of meningitis which left our hero with a shattered memory followed by a recovery process of grim revelation is written in a typically forthright manner. When you get to the bit where he describes how he caught the bug, I'd advise you not to be eating or drinking while reading.

His recovery, on instructions from the doctors, involved his family being hard on him, no mollycoddling, and him being constantly angry with himself, in order to provide enough mental stimulation to prevent him sliding into a permanently introverted state, and he muses that this may account for his constant spiky attitude to this day.

Anger is an energy...

Of course the main reason anyone bought this book (or dropped unsubtle hints before Xmas in my case) is to read about the years 1975 to 1981 when John was a major part of two bands, one who changed the course of a moribund popular culture, let alone changed popular music forever, and the other who, in their first three years at least made a truly progressive, ground breaking, and glorious noise. The best art is borne of adversity, and both the Sex Pistols and Public Image Ltd had that in abundance.

Replacing the unfortunately musically able Glen Matlock with Sid Vicious, a bloke who had so little musical ability it quickly became apparent that he was incapable of picking up even the rudiments of the bass guitar, is an example of Lydon's wilful self-destructive tendencies where his bands are concerned. Sid was so completely musically inept that he was often unplugged when "playing" live. As for his demise, John pulls no punches, saying his mate was out of reach and beyond help. A combination of a dreadful upbringing - apparently his junkie mother used to give him heroin wraps for his birthday - the utterly wrong choice of squeeze, total gullibility and a complete lack street-sense meant his decline was perhaps inevitable.

Contrast Sid with the other mate Lydon drafted in on the four strings, this time Jah Wobble (John Wardle, name mispronounced by an out of it Sid - it stuck!) in PiL, another bloke who had never picked up a bass guitar before. This guy was a natural, and soon picked up the ability to deliver the pummelling thunderous dubwise bass that underpinned PiL's first two and not uncoincidentally best albums. Wobble was a genuine hardcase, unlike Vicious for whom it was all an act, and also in complete contrast, totally driven. Reading between the lines he essentially got the boot from PiL for bullying guitarist Keith Levene, another future H junkie, and by all accounts a right royal pain in the 'arris, and precious with it. However, that unlikely trio as Public Image Limited made certainly the most challenging and best music of Lydon's career.

Even though musically, as the various versions of PiL became less and less envelope-pushing, more predictable and thus safer, lyrically Lydon has maintained an ability to this day to target inequity and class inequality with a razor-sharp wit. There are many instances in the book where John explains the inspiration behind his lyrics, both for the Pistols and PiL, some of which were well known - Death Disco was written for his mother, dying from cancer, Albatross was a long sigh of relief at "getting rid" of McClaren - and some not so, which I won't spoil by quoting here, and it all makes for insightful reading. He also doesn't shy away from criticising the sheep-like attitude of his own class, and often highlights his own faults. In that respect this book is the mirror image of Morrissey's self-aggrandising and vainglorious autobiography, and is much the better of the two because of that, for all the unintended hilarity within the pages of Mozza's tome.

Away from his musical pursuits, it is amusing to contrast Lydon's varying degrees of frustration veering on disdain for McClaren's partner in crime Vivienne Westwood with his obvious love of her quirky fashion designs. He has carried on this love of dressing up to this day. I never had Lydon down as a clothes horse, but there you go!

The one constant throughout most of John's adult life is his soulmate, his wife Nora, and the book frequently comes back to the anchor in his life, and it is often mentioned how the author would not be able to cope without her. Becoming foster parents to Nora's wayward daughter's kids shows a seldom revealed human side to the face of punk. Quite rightly Lydon has always striven to keep his private life out of the glare of the media, and for the most part he has succeeded.

Diversions such as the Country Life butter adverts, the money from which was used to reform the re-invigorated current version of PiL, appearances in various TV shows, and tales of being offered the part of King Herod in an eventually pulled tour of Jesus Christ Superstar (no, really!) make for amusing reading.

Nowadays pop music is a corporate and bland affair that, to paraphrase one of Morrissey's lyrics, says nothing to modern youth about their lives, and the stars of this new era tend to increasingly come from privileged backgrounds. As I may have said earlier, all true art comes from adversity, and John Lydon is the modern equivalent of the American blues singer, signing his life experiences from the heart, a million miles away from the James Blunts of this world.

While the book could have done with an editor, it is a good read and Lydon gives enough away to reveal Johnny Rotten the man, and you come away from it with your respect for the author intact, even enhanced. More power to ya, John, keep on keeping on!