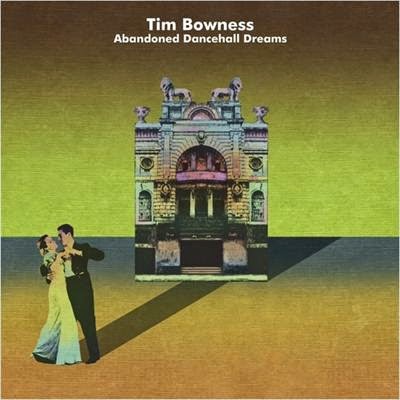 Starting life as tentative ideas for a no-man album, Abandoned Dancehall Dreams morphed into Tim Bowness' second solo album, some ten years after his first, 2004's My Hotel Year. There is a big no-man connection on this new album, as the no-man live band is used on the record to great effect, along with some striking contributions from the guest musicians. The album is mixed by Steven Wilson, and mastered by Pink Floyd engineer Andy Jackson, a thoroughly professional set up that pays big dividends.


The album is a suite of loosely linked songs on the theme of loss, reminiscence, regret, resignation and longing, all set within the sometimes literal, sometimes metaphorical "abandoned dancehall" of the title. It brings a smile to recall that one of the best gigs I’ve been to in recent years was the Burning Shed 10th Anniversary bash, headlined by no-man at the Leamington Spa Assembly Rooms. This grand art deco venue, then not long restored from its former dilapidated or some might say abandoned state, into one of the best live music venues in the Midlands, began life in the 1920s as, you guessed it, a dancehall. There’s a neat metaphor there; not all change, or even decay, results in an abandonment or ending, rather, embrace the change for a new beginning. A concept that a lot of the characters in these lyrics have yet to accept into their collective ground-down psyches.

Starting off at a canter, propelled along by Pat Mastelotto's tribal drumming, The Warm Up Man Forever lives in a world of 1980s big drum productions intertwined with a surreal Enoesque soundscape as the protagonist wearily accepts his fate as a second-stringer. Enlivened by a feisty and spidery guitar break from Michael Bearpark who was under instruction to "sound like a wild dog having a street fight with a conger eel", the song charges to its conclusion.

Following that we have the more familiar no-man styled sonics of Smiler At 50. If a song can be both sublime and terribly forlorn at the same time, then this is it. Smiler At 50 is a tale of a woman old before her time, living on past memories of fleeting love long lost, and fans of Tim's band will recognise the melancholy that drips out of this sad, sad song like a slowly wrung flannel. The elongated sigh of song, sung in Tim's best "David Cassidy of Prog" breathy intonation, aided by the disconsolate "aah-ahs" of the backing voices in the chorus is lengthened by a gorgeous string arrangement from Stephen Bennett, and, in complete contrast we have a power chorded noisy ending, replete with trademark Steven Wilson production touches in typical grandiose fashion. By now the lyrics are over, and the music has become a soundtrack to the turmoil in Smiler's careworn mind. More crashing drums from Pat Mastelotto give this thunderous denouement its head.

Smiler later returns two years older; still lonely with "No ring around her finger, no chain around her neck. No seasons in her life, just damage to inspect" while staring at the empty inbox of her email account, to a melody that reminds me of The Mekons' Dickie, Chalkie And Nobby. God, this is so desperately sad. Sung in any other voice than Tim's it would sound wallowing and maudlin, but Tim manages to infuse his characters with a sympathetic humanity where other singers sometimes fail.

Sometimes the memories are good, as the protagonist recalls the carefree abandon of youthful dancehall days on Songs Of Distant Summers, but for the most part the album is down there in the mournful room. In particular, Dancing For You has to register as one of the saddest lyrics I've heard in a long time and rarely has loss and hopelessness been so succinctly summed up in song, Tim's wistfully longing vocal perfectly conveying the heavy pathos. Complimented and in part redeemed by Michael Bearpark's soul-searching solos, this song is a perfect distillation of sadness.

Returning to Songs Of Distant Summers, it is interesting to note that this song is shorn of a nine-minute instrumental coda that Tim eventually thought superfluous. As a songwriter, Tim can see the musical wood for the trees, something more than a few prog musicians would be well advised to take on board. No "long for the sake of it" aimless noodling here! Given the undoubted high quality of the musicians involved, these instrumental sections, largely based on Steve Bingham's improvisations, are actually decent pieces of music in themselves and can be found in part on the bonus disc.

I Fought Against The South is the most no-man sounding song on the album, and indeed the liner notes tell us that it may be viewed as "an angry companion to Photographs In Black And White". The "south" of the title is a metaphor for a possible escape from a failing relationship, not Tim's one-man battle against the Chipping Norton set! With no need or desire to express this anger in the form of the generic powerchording so beloved of 101 cliched prog metal bands, the atmosphere builds and builds like a slowly heated kettle on an oven range, ending by being taken off the boil to the accompaniment of Andrew Keeling's ethereal flute. Lovely.

Abandoned Dancehall Dreams ends not with a bang, but Beaten By Love, reprising a calmer version of the tribal drums of The Warm Up Man Forever, this time supplied by Andrew Booker. This song has been around in one form or another since 1987, last appearing on no-man's 2012 superb live outing Love And Endings. After the emotional sturm und drang of what preceded it, this tune is a good and much needed surrender to the arms of love, and an unexpected but fitting full stop to the album proper.

The three remixes add new dimensions to the original songs, Grasscut's mix being open and spacious with modernistic electronica additions. Richard Barbieri adds his trademark lush and subtle atmospherics to a song already up there in the clouds. The result is a heady swoonsome mix, and utterly gorgeous. UXB beef up Stephen Bennett's "Spontaneous UEA Vocal Ensemble" (actually a choir of two!) to great wordless effect on the final remix, removing Tim's vocal entirely, making for a completely radical overhaul.

The outtakes include the abandoned title track, which Tim thought "out of step" with the finished record...my that was puntastic, was it not? He's right, musically it doesn't really fit as its waltz time renders it maybe too optimistic, although the lyric is suitably dark; "listen to the sound of dead men singing", indeed!

The bonus disc is more than worth the time, and the whole package is presented in a sumptuous digipak, with Yellow Submarine/Python-esque artwork from Jarrod Gosling.

A contender for album of the year, I believe if you are so inclined you can vote for it in that celebration of advertising revenue that passes for a Prog Poll. Buy it anyway! Abandoned Dancehall Dreams is a triumph of progressive songwriting and a million miles from the piles of sub-par riff-drenched navel gazing or pale strivings for past glories that passes for a depressing amount of modern prog these days; but then Tim probably and rightly wouldn't see himself as "prog" anyway. And if there are any tickets left go see Tim perform some of these songs along with Henry Fool on 11th July. You would be fool, Henry or otherwise, to miss it! See link below for tickets.

Interview with Tim Bowness here: http://www.innerviews.org/inner/bowness2.html
at June 29, 2014 No comments: