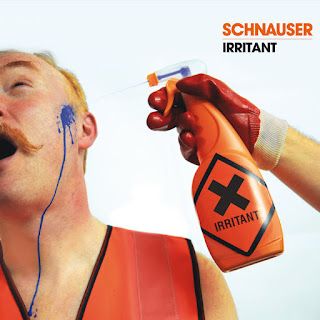 Madness, they call it madness...

In my fevered imaginings I would like to think that the annoyingly over-capable DIY Sturmführer Dick Strawbridge, he of the unfeasibly humungous moustache and loveable teddy bear persona was playing the Midi-kazoo for Schnauser, the wonderfully strange yet cuddly combo from Bristol, as they cavort around the stage playing Have You Got PPI?, a particularly loose-limbed number from their fabulously tumescent new album Irritant. In my peculiar fantasy, Dick looks proudly over to his son, guitarist and singist Alan as he belts out the wonky wonderfulness that comprises Schnauser’s weird yet perfectly self-contained universe, as strange tiny creatures synchronously writhe about in Dad's bristling upper lip hair monster.

In other news it turns out that "We are the brainworm" as the Nutty Boys play klezmer, and enquiries are made by chanting girl choruses asking "Have You Got PPI?" while a craftily purloined cheesy synth line from Bowie's Sound And Vision burbles away. Above all this lunacy, the melody is king and queen, and on the lilting but portentous Fail Better, the lyric implores the listener to get off their collective ass and try again. Failure may be the only option, but goddamn, do it better! A curiously fatalistic take on the Protestant work ethic that no doubt has crossed all our horizons at some point. On the other hand "Get yourself a life boy, get yourself a life girl" as the broiling sounds of wildly careening guitar, saxes and and noises off permeate the stately pace of the melody. Groovy feckers, this Schnauser band, who have caused my newsfeed to be inundated with adverts for the International Schnauzer Society, Alsatians For Jesus, and Poodles On Stumps, the bastards...the band, not the doggies, c'mon.

The club band at the local Latino Disco strike up here and there with a carefree joyfulness that flies in the face of the heavy manners of these perma-weird times. Hypertension is only displayed in the tune's title as this infectious instrumental does odd things with your pelvis. The album title is another misnomer, for this fab record is about as annoying as being given a full body massage by...insert your fantasy rubdown applier here. She or he is however suffering from a caffeine overdose, won't stop talking while chewing his or her bottom lip. It's a small price to pay.

A New Atmosphere is a snake-hipped bossa nova for dancers with at least two left feet. This thing schwings, baby, in a louche Hatfields kinda fashion, before briefly meeting 10:15 as it furtively leaves the bedroom, then subsequently descending to the bottom of the well, where workers go blind making mustard gas shells. There be an underlying seriousness at work, doncha know? They even get in a good old rant against the Bullingdon Bullies and turkeys voting for Xmas on The Monday Club, another musically satisfying trip through a series of vaguely familiar motifs, that as a whole make for the knee-flexing Schnauser Sound, ending like early Roxy swirling away down the plug hole.

It is over two and a half years since Schnauser's last album, the defiantly odd Protein For Everyone, and the Bristolians have refined their once fierce quirkiness into a gloriously fun experience. Irritant is just right for these surreal summer months as collective madness descends upon this benighted nation. The ongoing Schadenfreude Party is going to be a long one, methinks. All hail Supreme Leader Boris as we barf into our soup.

Sorry, got sidetracked there...Gleaning the influences that inspire this record is like lowering a net into an over-populated fish tank and coming up with a bewildering variety of writhing aquatic wildlife. This smorgasbord of delights is the combination of everything you can think of, from Cardiacs, through Madness, to Ivor Cutler via The Beatles and very early Daevid Allen/Kevin Ayers' Soft Machine, and on to Syd's Floyd, Berlin Bowie and XTC. As a result it cannot be pigeonholed for convenience.

Just give it a listen over on Bandcamp, for it bears bounteous gifts. Hopefully, this drooling missive might make you curious enough to buy it. Right. I'm off to join The Chocolate Labrador Motorcyle Club...

Tracklist:
Total running time - ...about as long as a couple of very leisurely pints, or the time it takes Kat to saunter up the garden at 2:30am, catch, bring home and devour a luckless rodent, at the foot of our bed.

Footnote: No YouTube video available for this album, though if you type "Schnauser Irritant" into YT's search engine the first vid is the instructional "How to keep your mini-schnauzer's beard unstained", which you might find useful. Glad to be of help.
at June 10, 2017 No comments: