Terje Rypdal - After The Rain

After The Rain sounds like a soundtrack to a particularly bleak episode of the moody Swedish crime drama Wallander, where the hero has several dark nights of the soul within the time it takes him to drink a cup of coffee.

The scene - an isolated cafe in the back end of beyond. Vast skies in a tumult of colliding anti-cyclones. Wallander arrives, unshaven and unwashed. A speck of dried blood on the crumpled collar of his 8 day old shirt.

Sat at a window table, Wallander staring mournfully out the accross the windswept plains of Sverge as his inner mind churns in turmoil. A bored waitress slouches over. Wallander orders a Danish pastry and a black coffee. The order arrives and he watches in silence as a fly lands on the cake and begins to lazily wash itself. Outside, the wind picks up and the heavens open. A single tear rolls down Wallander's cheek.....

Of course, if you've not seen Wallander, none of that makes any sense! So here's a proper review.

Terje Rypdal is one of the best known modern jazz guitarists in Europe, and has released many albums since 1968's Bleak House. The almost entirely instrumental After The Rain came out in 1976, and is not so much jazz, more ambient. Delicious melancholy melodies float out from this album which features minimal instrumentation, mainly piano and Rypdal's plaintive guitar playing. The whole thing is achingly beautiful yet sad at the same time and something of a lost classic in my opinion.

This is a lost gem. Those of you in the know will be aware that Cradle was the short lived psych-folk group formed by Sir Terrence of Bickers after he left UK shoegaze maestros The House Of Love. Their one album starts with the strangely catchy Second Nature, but from then on in forget all about hooklines, as the album meanders through the strange psychedelic marshland that is Mr Bickers' inner muse. Various folk tinged melodies float in out of the mix culminating in the 16 minute epic Chloe's Room.


Apart from a short lived but unfortunately uninspired HoL reunion a few years back, nowt has been heard of Mr B, who is sorely missed by those who appreciate modern psychedelia. Terry where are you?

The Flaming Lips were in danger of becoming a self parody what with the sometimes forced jollity of their live shows fast becoming an irritant. If they just concentrated on playing the music and left out all the fey hippy nonsense that Wayne Coyne seems to be obsessed with, then I for one would appreciate them all the more.

Then along comes Embryonic, a return to form, certainly musically, and for the some part lyrically too, after the disappointing At War With The Mystics. Apparently semi improvised, the music on this album charges along through all kinds of influences like a bull in a china shop, and is full of the quirky surprises Lips fans have come to expect. It sounds fresher than of late and it sounds like they all had a thoroughly good time in the making of the album.

Lyrically however, the whole album is full of love vs evil imagery, sometimes so literally you'd think it was aimed at an audience of 10 year olds. I for one soon tire of this and concentrate more on the tunes! There are exceptions - Convinced Of The Hex is a powerful opener with drugs & sex, The Sparrow Looks Up At The Machine is a simple yet evocative tale, and as for the barking mad I Can Be A Frog, well all I can say is it made me laugh out loud the first time I heard it.

All in all a good album, but The Soft Bulletin remains their best work by a country mile. Will they ever top it?

The 4011th Fall album includes the 11 minute epic "50 Year Old Man". "I'm a fifty year old man and I like it, I'm a fifty year old man, waddya gonna do about it?" proclaims the venerable Mr Smith, curmudgeon of this (and any other) parish. As a recent hitter of a glorious cover drive for 4 to reach the half century myself, of course I love this track to bits. The album as a whole will delight Fall fans as a fine example the best cut-up butchery you're likely to hear this side of Bend Sinister.

If you've stumbled across this review by accident and you've never heard of The Fall, you'll hate it, which makes it all the better in my opinion. Go back to your Muse albums and let us glower in the cave of our choice! 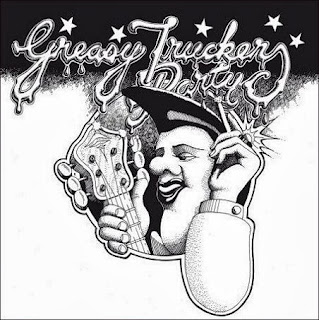 Greasy Truckers were a loose cooperative charity formed to help the homeless in the austere post-hippy oil crisis hit strike-ridden UK of the early 70s. This concert, held in the famous Roundhouse venue in Chalk Farm, London, was a fund raiser for the charity, and was hosted by the then ubiquitous hippy DJ Andy Dunkley.

The original double vinyl album was released in 1973. Although the full concert is now available on CD, I will stick to the original 2-LP format for this review. The stars of show were Hawkwind, ably supported by Man, Brinsley Schwarz, and not so ably by Magic Michael, a sort of low-rent Richie Havens. Thankfully he only gets one cut, even on the expanded CD edition. Also on the bill but unable to perform owing to a power cut, were Byzantium. Their "set" is represented by two minutes of silence bookended by Andy Dunkley's apologies and requests to get it together in the dark, or somesuch, maaaan!

The Hawkwind set finds them at the height of their powers, and includes blistering versions of Masters Of The Universe and Born To Go, the latter dedicated to the striking miners, cause of aforementioned power cut! The lovely Stacia was there, but I bet she was cold - those of you old enough to remember her charms will get the point(s)! This is also the gig where Silver Machine was recorded, a tweaked version of which produced Hawkwind's biggest hit.

Second on the bill were Hawkwind's labelmates and fellow stalwarts of the benefit scene, the mighty Welsh wizards, Man. At the tender age of 13 I was introduced to this album and more specifically the 20 minute freakout Spunk Rock, and to this day it remains one of my favourite pieces of recorded live music.

Apparently the track was actually about 30 minutes long, but the tape ran out towards the end of the previous band's set, so the first 10 minutes are lost while new tape was frantically spooled. Even so this is a twin guitar epic that really needs to be heard as mere words cannot convey its psychedelic intensity. One of the bonus tracks from their set on the CD version is Bananas - "I like bananas coz they got no bones, I like marijuana coz it gets me stoned". Genius!

In contrast Brinsley Schwarz, forerunners of the early pub rock scene, provide the needed relief of mere 3 to 4 minute songs in abundance, and damn good at it they were too. Amongst their ranks was one Nick Lowe of future production fame, and most of the rest of the band became Graham Parker's Rumour.

Well worth buying the expanded CD version if it's still out there.

Midlake - The Courage Of Others

I've been carrying around an HMV voucher since last Xmas, so I bought a couple of albums on spec, the first being this cd, never having heard the band before. I had read a review describing the influences on the writing of this album as primarily early 70s English folk rock, which must have stuck in the memory.

This is a strange album indeed, and a curate's egg if ever there was one. I can't decide whether it is a work of genius or just plain dull.

It has to be said that there are some gorgeous harmonies and great playing on the album, and you can hear all sorts of references here, from Fairport Convention to Barclay James Harvest, Steeleye Span, Jethro Tull, Family etc. Standout songs are Acts Of Man, Winter Dies, Rulers Ruling All Things, In The Ground.
Taken as a whole it is hard work as the mournful feel of the album is compounded by it's lack of light & shade, or of any significant tempo changes. On the other hand it is quite mesmerising and entirely in tune with our never ending winter.

Reading other reviews frequent mentions are made of the band's sophomore album 'The Trials of Van Occupanther' as being a work of some merit, and entirely different to this effort. I shall investigate, as any band that has the courage and integrity to attempt a take on a totally unfashionable branch of music history deserves another chance.