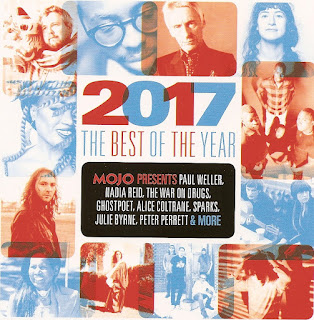 The first of the year's "best ofs", for some reason MOJO's CD contains a couple of tracks from reissues, as if there isn't enough new music to fill the 80 minutes of the disc, which of course is nonsense. As usual it is a largely populist-centric shiny disc, with a few obscure albeit mainstream entries for that "hip" factor, and as ever there are some glaring omissions. Even if we forget my home in the more esoteric hovels at the end of the rock spectrum, why no UNKLE, or Laura Marling, for starters? Anyway, here goes...

The War On Drugs - Pain
Possibly the worst band name currently extant? Actually despite the title this is quite pleasant, in a diluted electrified Waterboys stylee.

Songhoy Blues - Bamako
The funky afros git down. Not bad, at all.

Ghostpoet - Immigrant Boogie
The heaviest thing here, musically and lyrically, it lurches along while the main man imagines the unimaginable plight of refugees marooned at sea. Easily the best track on this compilation.


Sparks - Unaware
Sparks are one those very few bands who get better with age. A song about the crushing ennui of modern living that awaits a wee innocent babby.

Nadia Reid - Right On Time
Everton 1980s midfielder Peter Reid's daughter sings a song about a last minute winner against Wimbledon that kept the team up, to an avant-metal backing. Or...a song from MOJO's No.2 album of the year that is pleasant enough, as it dream-pops along. 10000 Maniacs did this kind of thing decades ago, but hopefully it resonates more within the confines of the album.

Hurray For The Riff Raff - Hungry Ghost
"Hurray"? Wassat, then? A decent lively guitar pop number, but nowt to write home about to be honest.

Peter Perrett - An Epic Story
No-one is more amazed that Mr Perrett still walks among us than Mr Perrett himself, it seems. Here, he sings a touching love song to his wife, without whom, etc... How The West Was Won is a classy album that shows the louche Only Ones front man still writes a pithy lyric.

This Is The Kit - Hotter Colder
Murky African-sounding folk moves by Kate Stables that would have benefited from a cleaner production, or any production at all come to think of it. Another one that floats by without making much of an impression.


Endless Boogie - Back In '74
I have no idea if this is typical of this band, but to me they sound like a swamp rock version of The Doors with an earnest "singer" narrating in sub-Jimbo fashion about watching Kiss in 1974 while flying kites on bad acid, and getting bottled for having shaved eyebrows. Nope, me neither...
Underneath is a decent retro-rock soundtrack, although All Them Witches would make gumbo stew out of this lot.

Lal & Mike Waterson - Shady Lady
The second reissue on this compilation. Bluesy rootsy folk, with strained harmonies, as I'm sure you know. I prefer the Iron Butterfly song of the same name.


All in all, a disappointing disc that gives the impression it was rather thrown together at the last minute without a lot of thought. Usually, MOJO's end of year round ups while being more mainstream than my usual fare, often include some interesting sounds new to me that require further investigation. With the possible exception of Richard Dawson, not this time, I'm afraid. 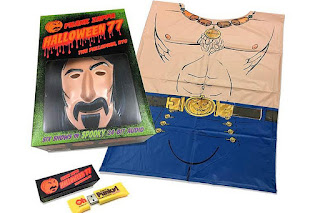 Halloween 77 is an unusual box set containing all six concerts that were filmed for the Baby Snakes movie, with all the music in high-res WAV on a USB stick, and a Zappa Halloween costume and mask. Or, for those of us with more sense than money and no desire to have six concerts with the same set list, a mere 3-CD version of Uncle Frank's celebration of that lovely American cheesy horror fest and primary school bullies' night out Halloween at The Palladium, NYC, containing the whole set from the 31st October show. 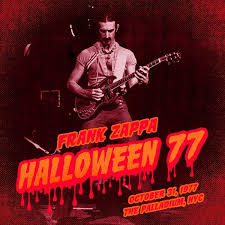 A collision of extraordinary musicianship and occasionally toe-curling non-PC, some might say mysoginist lyrics that defies categorisation, Halloween 77 showcases a band that are drilled to perfection, and the musicianship on display here is of the highest quality. Thankfully the worst of the lyrics are only a minor intrusion into this gargantuan musical feast, and even the base scatalogical humour of the lyrically cringeworthy Punky's Whips is eventually overshadowed by some mesmerising musical derrring-do. Mind you, the less said about Bobby Brown Goes Down, the better. Shut Up, and Play yer Guitar, indeed. Incidentally, listening to the intro of this version of Punky's Whips makes you realise where the roots of the then unknown second guitarist and all-round Zappa foil Adrian Belew's 80s Crimson classic Indiscipline came from.


The first Zappa album I bought new was Zoot Allures in 1976, and most of that album is included in the set list. Black Napkins has always remained my favourite Frank Zappa guitar excursion, and, daft as it sounds its inclusion here was the main reason I bought this triple CD set. There is also a half-hour long (!) version of Wild Love from Sheik Yerbouti, most of which was recorded at marathon sessions thinly disguised as rehearsals for these gigs, although the album itself was not released until 1979.

Boy, could Frank write a tune, as well as being a great entertainer, witness Halloween Audience Participation Time, aka "A re-enactment of the sum total of human civilisation" which includes a blast at Warner Bros. Records, whom Frank had acrimoniously left not long before, and audience members administering discipline to each other on stage. It ends with Frank as ringmaster getting the entire audience to attempt to dance to the impossible time signatures contained within the otherwise straight 4/4 of The Black Page #2.

The final CD is mostly given over to the half-hour long encore, which brings the set up to the three-hour mark. You don't often get bands doing that nowadays, and you can see why Adrian Belew in his brief but amusing and informative essay in the otherwise overly slim and less than comprehensive CD booklet reckons Zappa was the hardest working musician he ever played with, Adrian eventually coming off stage with "that happily-drained feeling, no more to give...". The encore includes the aforementioned Black Napkins, so, I can't hear you asking, "was it worth wading through the rest to get here?" Too damn right, it was!

After the encore comes the Bonus Section, basically a few extracts from the other five shows and a further near half hour of classy music and Zappa's larking about. There's more comedic audience participation with a dance competition for those who freely admit to being a "chump" and are "definitely unco-ordinated", as the previous night's contest had been for those with "no natural rhythm". No more spoilers, go find out for yourself.

Halloween 77 is without a doubt one the most important archival releases of the year, and even if, like me, your ventures into the wild and wacky world of Frank Zappa are only fleeting, I recommend it highly.


"Just remember one thing...rock'n'roll is totally preposterous"
at November 05, 2017 No comments: