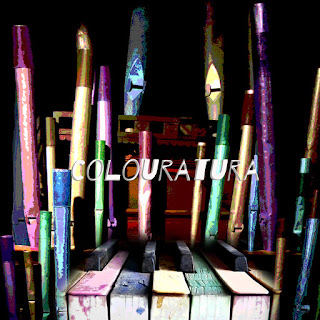 So says the dictionary, and thankfully we can ignore what follows the comma, but the rest applies.

An album made in small hours in their spare time by Nathan James, who wrote the music, and Ian Beabout who twiddled knobs in his fast becoming inimitable fashion, this unusual trip throws the genre book out the window. Over the course of its 50 minutes, a seamless journey split into definable songs or tracks for convenience, but playing as one piece, Colouratura in its first three tracks covers spectral if unsettling ambience, plaintive ballad and Faustian space rock, which gives an idea of the "scattergun set to stun" nature of this record.

The height of the realised songwriting on the album arrives on Sea Shanty, which sways along in proto-Procol Harum fashion before a middle eight that rides the swell in triple time. Nathan James is a fine singer with a good range and emotive scope, so much so that pernickety bugger that I am, I can even forgive him very occasionally going slightly wayward with the pitch (no doubt something to do with the yaw) on Sea Shanty as he gives his soul to "For what is a man, if he's not really free? And what is human without dreams and destiny?" What, indeed?


The title track is a love song accompanied by lone piano, and the obviously needed bridge of The Other Side takes us straight into the baroque-prog territory of Jekyll.Hyde, which puts me in mind of The Stranglers from their Meninblack phase. Enlivened by Dave Newhouse's sax, an air of menace permeates proceedings as Nathan's treated voice sings his fatalistic lyric to us. A degree of continuity brings us the suitably creepy Old Nightmares, introduced by a piano in a Gothic setting, and like a Hammer movie, the horror is with an element of cheese. "There are voices in my head, and I can't get them out, but I can't let them in...I think I'm losing my mind" our narrator tells us along with mentions of "the witching hour", "evil" and Vincent Price cackling. Mmmwwwhahahahaha...

In fact, from Jekyll.Hyde onwards Colouratura becomes more cohesive, as if the spirits have aligned in a world of Gothic pop, confronting death, war, and the big Questions, the latter ending the album in a punky charge as the sun comes up over the mixing desk.

All bases are, if not covered, at least fleetingly visited on this never-a-dull-moment album of after hours winding down (and up), and it has developed a life of its own along the way. "A labour of love, and it shows" says Ian Beabout, but warts and all this is a fun ride through two mates letting off steam at the end of stressful days out there in the increasingly insane "real" world. The Matrix is broken, and this is part of the soundtrack.