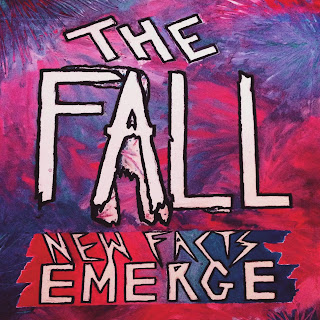 New Facts Emerge is the 32nd album from that strange mental institution burning that goes by the name of The Fall. Led by Mark E. Smith, it is entirely probable that you or I is at least distantly related to someone who has been in The Fall, or at the very least is only three steps removed from a plucky musician with a career death wish to back Smith's by now embarrassingly random splutterings. They seem to be drawn to Smith like moths to a flame, and he has got through approximately 70 of the poor fuckers since crawling out of Prestwich with the first line up back in 1976.

Over the years this band has belted out some stonkingly classic records, and even now and well beyond their prime have until fairly recently managed to pepper their albums with blasts of righteous indignation that make the former fan such as I still occasionally part with readies for a shiny disc. Yes, we still buy CDs, for like Mr Smith we are now quite old. The last time I did this was back in 2008 for Imperial Wax Solvent purely on the strength of that marvellous old bloke empowerment anthem, 50 Year Old Man. That they actually played that song the last time I saw them live in 2011 was a minor miracle in itself as Smith's dictum has always been "Never look back", for which he can only be applauded.

Right...that's the good news. The bad news is that for a while now Smith seems to be doing little more than taking the piss, or letting it leak out, come to think of it. Coincidentally, the track I have playing right now is tellingly entitled O! Zztrrk Man, a title almost as unintelligible as the deliberately distorted and garbled (yarbled?) declaiming by the cult leader as he slumps in the darkest corner of the most downmarket cheap shit room imaginable, a two-thirds drunk pint of cheap lager next to his slumped head as it burbles incoherently into a pool of beer, drool, and fag ash. That about sums it up - Smith could make a recording of his bathroom noises and set it to the competent but uninspiring backing of his latest bunch of poor drone-slaves, and the regulation 19706 units would be shifted to the supplicants who will then declare it nectar from the gods to anyone who will listen. Unfortunately for them, some of us old fuckers still have our discernment faculties intact, fangyewverymuch.


OK, maybe it's not THAT bad - Gibbus Gibson is actually sung, after a fashion, and though I have no idea what he was singing about, it sounds vaguely melancholic, and possibly even self-reflective. Or is that hoping for too much? You see the problem is, much like the worst excesses of the obese and flatulent arse of prog rock, aka ELP, Mark E. Smith appears to have little or no self awareness, and seems to treat his audience with a similar lofty disdain to the 70s dinosaurs. Ironic that, doncha think?

By the time this grating record gets round to the last track, the almost prog-length nine minute Nine Out Of Ten, I just want it to stop, much like The Fall themselves. To think this sad spectacle once used to be genuinely cutting edge and singularly magnificent. Unfortunately, this album is nowhere near nine out of ten, and no new facts have emerged, it simply confirms my worst suspicions.
Bloody sad, really.
at July 28, 2017 No comments:

Jumble Hole Clough - Go and play quietly by yourself 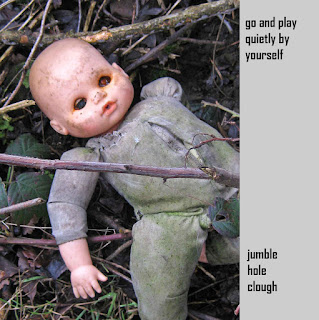 Foreclose on the definite, obliterate all expectations. From the building blocks start anew. Reconnect the heart to the mind via the spidery funk line. Dangle a proposition and attach it to the running board of a runaway bus, for this is the start of a new adventure. The unknown is not un-named, it is Go and play quietly by yourself, the 758th album this epoch from Jumble Hole Clough, a possibly imaginary concept that exists both before and after Schrodinger opens his box in the troubled hamlet of Hebden Bridge yesterday. The tree fell in the forest, no-one observed it apart from Colin Robinson who wrote a tune about something else entirely called Skin & Hide that combined pop and the fractured dissonance of our troubled souls. "Goat and gland, Autonomy in hand, Don’t fill your ear full of sand".

Colin's work will engage your noggin as well as make you smile, possibly at one and the same time. This is the kind of multi-tasking I can cope with. Colin's hovercraft is always full of eels, which is probably why he gets few paying customers. Slippery blighters, eels, and some of these sprout wings and fly off dripping and shimmering before being sucked into the turbines of passing budget airliners, flying low to see if they can ascertain where all this goddam interference is coming from.

Can you send me one of Santa's Swearing Elves for Xmas?


You can get this sequence of noises HERE, and Colin invites you to Name Your Price. It would be good if you bought it for cash money, he needs a new shovel to bury all those dismembered eels that fell from the sky and landed in his front garden t'other day...