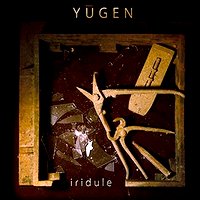 Another band that I have arrived at after the train has left the station, Yugen are the rare kind of discovery that actually merits the word "progressive". Iridule, their third album, came out in 2010.

Vladimir Nabokov coined the word "iridule" as a description of the colour of a particularly vivid rainbow. Nabokov had a condition known as synesthesia whereby the sufferer, if that's the right word, for an artist may well see the condition as a gift, "hears" colours. If he were around today and came across the vivid spectograph of sound that is Yugen's Iridule he may have had to wear the aural equivalent of sunglasses, so expansive is this delightful work.

Literary references aside, this band sees the not inconsiderable combined talents of Francesco Zago (guitars, mostly) and Paolo Ske Botta (keyboards) dazzle us with playful and stunning complexity, but not for its own sake. Joined by their Italian colleagues and a veritable who's who of modern US avant prog the end result is as irresistible as it is complex.

The soundscape mixes from a palette of Gentle Giantisms and the avant prog influences of fellow countrymen Stormy Six as well all the usual RIO suspects, with the modern influence of US avant prog bands like Thinking Plague, Hamster Theatre and 5uu's, members of those three latter groups appearing on the album. The resultant sound is never clichéd and is for once an original thing, a new consequence rather than a copy of its influences, being full of constant surprises and delightful twists and turns.


The album is a series of longer and mostly instrumental songs interspersed by shorter and mostly sung pieces. Menacingly strident, On The Brink lets us know that this journey will be quite scary in places. Ending abruptly we are then on the Gothic ghost train that is The Scuttle Of The Past Out Of The Cupboards (see above), a nightmarish concoction that Gentle Giant might have come up with after a bad trip.

The title track uses Nabokov's Pale Fire as lyrics and a beautiful and ethereal thing it is too. The literary references do not stop there, for elsewhere an extract of Seamus Heaney's Crossings is used as lyrics. The sung parts are few and far between, given life by the becalmed and sultry tones of Elaine Di Falco.

Ganascia has the feel of a Sorcerer's Apprentice put through its avant prog paces and Serial(ist) Killer is the most odd thing on the record, which despite its tendency towards chaos still retains a strange structure, and I have yet to fathom the lyrics on this one!

Culminating in the atypical and tenebrous symphonic splendour of Cloudscape (below) where Francesco goes on many understated Frippian scale runs backed by the shadowy waves of sound from the ensemble, we have been taken on a fulfilling musical journey that has delighted, shocked and stimulated in equal measure. Yugen are a band, collective, call it what you will, of highly skilled musicians who know that dazzling virtuosity does not work unless there is an over-riding sense of purpose. The carefully constructed arrangements provide this framework and the end result is stunning.

We live in a culture that is palpably frightened of taking risks, much to our detriment, and bands like Yugen suffer for it. Four beats to the bar is fine for good times and dancin' but we live in times where anything even slightly intellectual, be it in music or anywhere else provokes fear and loathing and is confined to the margins, which is as much a condemnation of the timidity of our mass culture as it is a crying shame.

If you read my nonsense with any regularity you probably already own this, but if you don't, do yourself a favour and buy it, for it is el fabbo!