U2 as support act for Slade at The Lyceum, London, 19/10/81...I remember thinking this band might make it, but hats off to Gary Bushell of all people in his review of the gig for spotting U2's drift towards pretentiousness so early in their careers: ".......the cracks beneath the bands polished edifice became more and more apparent. Firstly the newer material confirmed the impression that U2 are letting their pretensions run away with them, ........... secondly Bono's glum, self satisfied pronouncements became increasingly offensive as the night progressed. It seems like he's beginning to believe the messianic treatment he's getting from the self styled radical press---a real cotton wool job that lets him get away with outrageous nonsense..."
Mr Bushell was obviously more intelligent than his promoted yobo exterior would have had us believe.
http://www.youtube.com/watch?v=SNX95XM_v7I

Kraftwerk 1981
It's probably not from De Montfort, but is from that year's tour - freaky but marvellous!

The Rolling Stones - Wembley 1982
The Human Riff and his mates crank it up - with lots of crowd shots at the end - can't see me though...

U2 - Milton Keynes Bowl 22nd June 1985
Now global superstars, Bonio & Co headline what was actually a rather good gig. The other bands were REM, The Ramones, Billy Bragg & Spear Of Destiny. Here's a rather grainy but nostalgic (for me) photo montage:

Email ThisBlogThis!Share to TwitterShare to FacebookShare to Pinterest
Labels: Text Of Festival - A gig going history 1976-2010

Wyatt/Atzmon/Stephen - '....for the ghosts within' 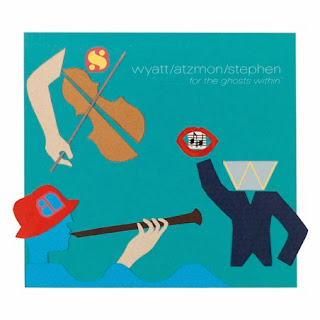 In which National Treasure (Sir - if there was any justice) Robert Wyatt collaborates with clarinetist & saxophonist Gilad Atzmon and violinist & string quartet leader Ros Stephen on an album of gorgeous covers of jazz standards and ballads and self composed tunes from the Wyatt/Benge stable.

Robert Wyatt is in possession of a voice given by the angels and a melodic sensibility few have equalled, which often lends his unique musical vision, a kind of hybrid folk-jazz-ethnic stew, an other-worldly feel.

This album is probably more traditional in construct than some of his work, and his voice coats the sweetbread of lush string arrangements and winsome clarinet and saxophone soundscapes like a low fat chocolate spread. There are some swoonsome songs on this album, and the old (In A Sentimental Mood, What A Wonderful World, Laura) blend seamlessly with the new (the haunting title track, Maryan, Lullaby For Irena). Wyatt also revisits one of his more well known ethereal covers, Chic's At Last I Am Free, and follows it with album closer What A Wonderful World, a combination that brings a tear to the eye.

Anyone whose heartstrings are not tugged every which way by this lovely album is either deaf to poetry or too mired in cynicism for their own good. Buy this now!

A short review of an early prog concept album used as a possible entry to Amplifier's blog on Virgin.com

Gentle Giant's third album, and the first to be released in the USA, was, unsurprisingly given the title, a concept album about three friends who meet at school and grow apart in adulthood - we've all been there. One becomes a road digger with a chip on his shoulder about the "...boss (who) gets all the money", another becomes a troubled artist and the third goes into white collar suburbia resenting the other two their apparent freedoms. Musically complex but playful with some great keyboards and guitar, even after 39 years this doesn't sound dated.

The video is from the band Three Friends, which contains some original members and was formed to play Gentle Giant music. This is School Days from the album.

A beast of a thing! Listen to it here while you read this....

The beginning is important in all in all things...

The Octopus is a loose concept and the creation of Sel Balamir, Neil Mahoney, and Matt Brobin, who make up the Manchester based combo Amplifier. The evolving idea behind this appears to be the inter-connectedness of everything, or “...referencing the human condition, infinity and entropy, everything and nothing”. The band has recently created a website dedicated to this amorphous concept where all is not quite explained.... http://www.theoctopus.info/the-octopus

The Octopus is also the third album from Amplifier, a double CD two hour epic three years in the making, officially released to the general populace on 31st January 2011. Fans of the band have already bought the deluxe limited edition graphic hardcover book (written by Sel) and CDs. After becoming disenchanted with their treatment at the hands of various record labels, and to their eternal credit, the whole project has been accomplished entirely by their own efforts. Sel makes the comment that had they signed a record deal the company would have insisted that The Octopus be released as two separate albums, but the band see it as an aesthetic whole, so a double CD it is.

Sel Balamir, and probably the others too, but Sel is the public internet presence the fans see, has worked all hours sent dealing with a never ending stream of production and distribution problems normally dealt with by A&R departments. The easy bit was writing, recording and producing the songs!

I only hope that all the hard labour put into this project pays off for the band, both artistically and financially, as there is always the danger that a project like this could be the proverbial straw that breaks the camel's back - let's hope not.

Musically this album is by far the most adventurous effort from the band to date, and all bases from space rock to proto Black Sabbath metal via grunge to anthemic neo-stadium rock are covered. Can you label this band? Well they're not prog-metal á la Opeth at one end of the scale to Dream Theater at the other. Worthy but frequently navel gazing prog site http://www.progarchives.com/ has listed Amplifier under "Psychedelic/Space Rock" - wrong again. I would like to suggest that Amplifier are "rock-prog" in that although there are are proggy elements to their music, and the "space" label is largely confined to the lyrical element, it is merely a flirting with the genre, ROCK is really their home ground.

A brief history of time....
cd1......................
The music is introduced with a heartbeat from another dimension, later consumed by proto-grunge thrashing. We're living on borrowed time, and a killer lumpen-prole doom riff from the Sabbath cabinet invites us to step right up for the end of the world. Title track The Octopus gives room to breathe while we hurtle through space, the human DNA at the command of another race. The weaker bend to the will of strong on The Planet Of Insects. Yeah, I think I'm getting the picture now. The sonically epic Trading Dark Matter On The Stock Exchange features a skewed flamenco motif and gives visions of excess and obsession with the ephemeral; hold on to nothing, suckers.
cd2...................
A trip into deep space starts with The Sick Rose, a low tempo scene setter to the prose of William Blake. Things zoom off on a driving riff into the Interstellar travelling faster than light into the heart of the sun. The Emperor could almost be a 21st century Have A Cigar in reverse, straining for and railing against the excess. Watch out or the fucking system will suck you in and grind you down, and where do we go from here? Eventually it'll all come crashing down under its own weight as more heavy riffing presages The Fall Of Empire. You'll leave here with nothing at all. A heavy trip. We've all made errors of judgement chasing the metaphorical dragon, but hey, let's come down to Earth and lay waste to Hollywood and the American Way with our own anthemic Oscar Night, death to Hollywood. At the end, who do you want to become, Forever And More, grab your own star.

...have you found yourself where you once started from?


You have to work at this album, it's not an easy ride and it was never intended to be. Stick with it and you will be rewarded in spades. Amplifier are more than the band anyone thought they were.

If you've read this far and are still listening, why not buy the damn thing?
http://www.amplifiertheband.com/merchandise.php

Best known for his pioneering work with the Warr Touch Guitar, and his application of same to the late 20th and 21st century King Crimson, since 1993 Trey Gunn has released numerous solo albums as well as albums with his Trey Gunn Band, and has collaborated with many left field artists worldwide. I'll Tell What I Saw is a double CD compilation covering his entire non-King Crimson career and a fine thing it is too!

Those familiar with his Crimsoid work will recognise the familiar Warr sound throughout, but rather than being derivative of KC, one has to remember he brought this sound to KC, not the other way round. Gunn also contributes fretless guitar, fretless bass and keyboards. The KC influence is inescapable though, and there are some Belew-like elephant squeals, and even some Fripp-like arpeggios, particularly on the later tracks. Also present throughout is a definite world music feel as he trawls through collaborations with Italians (NYX), Finns (KTU), Russians (Inna Zhelennaya - great voice & Sergey Klevensky & The Farlanders) and other fellow Americans. All of whom are new to me but definitely deserve more investigation.There are also the collaborations with KC percussionist Pat Mastelotto, The Quodia project (which is the heaviest thing here) - Mr Gunn sure is a busy man.

If you like Brian Eno's more bizarre instrumentals rather than his ambient work, or are familiar with later King Crimson, you'll certainly like this. Not for pop lovers!

Currently available to preview in full and to download at a reasonable $18 for over 2 hours of bendy noise.
http://treygunn.bandcamp.com/

Or get a hard copy