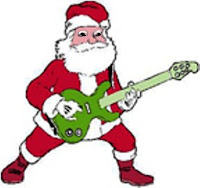 Another year passes; a year of turmoil and tragedy, where as ever the poor are made to pay for the greed of the 1% in an ideologically driven fatwah in the name of capital. Still, there's always music, eh? Looking at last year's lists, it seems 2015 overall has not quite hit those high standards, but there has still been a veritable small hillock of commendable releases, and here I will scratch at the surface with my annual roundup.

Again for your delight I have put together a Spotify playlist, where the relevant release can be found in that digital Fagin's lair of goodies pilfered from the struggling artist...or summat. There will be other links in the main body for those artists who either eschew or have no truck with the miserly streaming beastie. So, sit back and light a big one, boil some sprouts, chase a reindeer, whatever floats yer bauble, and plow your way through this little lot...

Julie Tippetts, long-time jazz songstress, initially famous for her association with Brian Auger in the 1960s, and Martin Archer, a multi-talented independent Sheffield-based progressive musical adventurer, continue their partnership with Vestigium, their fourth album to date, further extending their highly individual exploration of the songform.

Troyka - Ornithophobia
You are as likely to find obscure electronica dance music references in Ornithophobia as you are blues licks, jazzy time signatures and Aphex Twin rhythms. A marvellous genre mash-up!

The Unthanks - Mount The Air

*Bob Dylan - Shadows In The Night


The Zim turns crooner, covering early Sinatra tunes with an effortless panache. To say his singing which has always been, shall we say, idiosyncratic, isn't the best on this album is stating the obvious, but some folk saying he is out of tune are way wide of the mark and they have obviously never had to sit through entire albums' worth of dreadful vocals in the modern progwelt! Have a look at Amazon for a clear divide of opinion. There is a strange naive charm to this record which appeals, in direct contrast to its creator's worldwearily gnarled outlook, and personally I reckon this is marvellous stuff!

*Sufjan Stevens - Carrie & Lowell
Beautiful and heartbreaking, the story of Stevens' fractured realtionship with his mother. It doesn't get more personal than this.

The prolific Rhys Marsh under his band guise turns out a sumptuous suite of dark and  beguiling folk-prog-Gothic campfire songs for wood trolls.

A marvellously uncompromising racket, and all the better for it, too!

King Crimson - Live at The Orpheum
They might be playing old songs on this teaser from the current three drummer line-up's world tour, but unlike most other bands from the original era who are still functioning, King Crimson continue to reinvent their sound and never stand still. Phenomenal!

I've had a strange relationship with this, the fourth solo album from the Hardest Working Man In Showbiz. My initial thoughts expresssed in the review were lukewarm, and since then it has grown on me to the point where sometimes I consider it to be the dog's testicles. I say "sometimes", for the other side of the coin is that occasionally I also find it too slick by half and as cold as a fish. However, it is worth the price of admission for the pairing of Home Invasion/Regret #9, which I will now gladly concede are probably THE best 11 minutes of"rock" this year.

Van der Graaf Generator - Merlin Atmos
Fantastic document of the last tour, Plague getting a live premiere. Classy, even though they do unquestionably miss Jaxon. With Crim, the only original prog band who still cut the mustard.

*Bill Fay - Who Is The Sender?
Thirteen songs of wonderment from reinvigorated early 70s cult songwriter

A quietly strange album of covers from this fine and quirky band.

Trey Gunn - The Waters, They Are Rising

The master of touch guitar with a beautifully crafted ambient album themed around improvisations previously used as intros to the song "Here Comes The Flood".

Ciccada - The Finest of Miracles
Along with Anekdoten, the "proggiest" thing here, and there's nowt wrong with that!

O.R.k. - Inflamed Rides
Heavy and dangerous, like an anvil tumbling down a flight of stairs.

Metallic Taste Of Blood - Doctoring The Dead
MBV meet System Of A Down and whack each other senseless.

Live document of my favourite Softs line up. Holdsworth is on fire!

Porcupine Tree songs done in a jazz big band style! This works, too :)

*Anekdoten - Until The Ghosts Are Gone
Triumphal return for the Swedish retro-prog masters who now simply sound like Anekdoten. A masterful album. Do I make another plea for that elusive gig in the UK? Oh...I just did. :)

*The Tea Club - Grappling
Consummate modern eclectic prog from a band who keep getting better. Read Raff's review for an insightful analysis of their fine old racket!

Tim Bowness - Stupid Things That Mean The World
Another winner from the champion of doomed romance.

The Nerve Institute - Fictions
Marvellously intricate derring-do from the one man band and cultural polymath Mike Judge. If this is a "bedroom album", then this is the benchmark to aspire to.

Variously described as "steampunk prog" and "barking mad", another one-man band that shows how it's done.

Not A Good Sign - From A Distance
Maybe not quite up to the exacting standards set by their debut album, but nonetheless a classy work of accessible and interesting modern progressive rock.

If you thought there was nothing new to be done with fusion, think again.

Ghost Rhythms - Madeleine
...much the same could be said of this fine album, too. French, and brimful of je ne sais quoi.

*Guapo - Obscure Knowledge
The heaviest thing in the universe. Listening to and watching this at nerve-wrecking volume live was akin to a religious experience. Possibly my album of the year...possibly.

David Cross & Robert Fripp - Starless Starlight
Elegiac and shimmering, this is probably the most perfect ambient album of 2015. A thing of rare beauty.

*William D Drake - Revere Reach
Oddness that could only be English. Jez explains in his erudite review.

They're not, at all. The 21st century answer to Todd Rundgren records an album in typically obtuse fashion. It has a huge but odd dynamic range, with lots of bottom and top end, but hardly any middle. It actually sounds great, contrary to some cloth-eared opinionating on Amazon. The songs are wonderful, by the way.

*Echolyn - I Heard You Listening
This is prog, and I like it. There's a surprise for you... :)

King Crimson - 2015 Tour Box
This is progressive music, and I like it. That is no surprise, at all.

Jumble Hole Clough - A List Of Things That Never Happened

The Hebden Bridge Massive continue to cut rugs in their inimitable style. Sparse funk zips though the cosmos with Talking Heads piloting a ship crewed by Smokin' Venusian Dancing Chimps. Educational too...I never knew beforehand that "bathysiderodromophobia" is a fear of subways!

Another nice twist on fusion from another Frenchman...it must be something in the water.

*Loomings - Everyday Mythology
Spellbinding and complex, fun and full of unexpected twists and turns. This and Rêve Général currently in process as far as scribbling goes...

Hypnotic math-rock...If Guapo is the rebellious and noisy son, then Sonar is the studied calmness of the father “tut-tutting” in the corner, with a hint of pride.

Absorbing and clever modern prog that doesn't fall back on obvious tropes...well, it wouldn't be here if it did, would it?

Unit Wail - Beyond Space Edges
Where spacerock meets avant rock at the bar, gets drunk and falls over, arhythmically.

Anyone familiar with Ángel's work with October Equus or as a solo artist will know what to expect. A bit of a treat...listen to the link!

Necromonkey - Show Me Where It Hertz

Driving Krautrock-inspired synthrock is a description that only scratches the surface. Marvellous album!

Well, that's your lot. There are some albums I have in the "to do" pile still in their shrinkwraps, and if they pass muster I will endeavour to include them in the "Ones That Got Away" section next year.

Here are some other bits and bobs...

One That Got Away - Bent Knee - Shiny Eyed Babies
Released in November 2014 and completely missed by me last year, this album is so good I cannot allow it to pass unmentioned.  This great band have now found an appropriately eclectic home at Cuneiform Records, the future looks bright!

Another One That (Almost) Got Away - Peter Hammill - ...all that might have been
Released at the fag end of 2014, it just crept in to my list of that year, but some scribes are including it in their 2015 lists. Hammill's most perfectly executed long song format since Gog/Magog is well worth another mention here.

Somehow, I find time to read books. Although this weighty tome came out in 2014, as it was an Xmas present I only got round to reading it this year, so a mention for Future Days - Krautrock And The Building Of Modern Germany, by David Stubbs. If you enjoyed Julian Cope's pocket guidebook Krautrocksampler to this fascinating cultural backwater and want to know more, this is the book for you. Incredibly well researched, this book not only has sections on all the major players, but puts it all into a social and historical context. A great read!

Finally, things I do not understand...

Snarky Puppy...incredible musicians playing jazz-fusion? I should love it, lots of folk do. Nope, it passes me by I'm afraid.

That's it for another year, folks. Thanks for reading, have a fab Festive Season, and we'll meet up on the other side. Cheers! :)