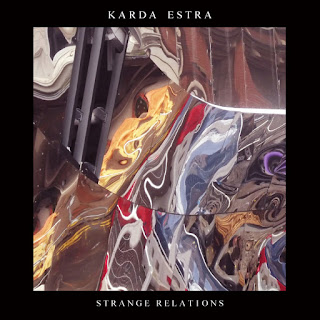 Last year a curious album by the name of Strange Relations came my way, and over the months since it has slowly revealed its many delights to me. For many years now, Richard Wileman has been ploughing a thoroughly individual furrow as Karda Estra, releasing several albums since debuting with A Winter In Summertime back in 1998. While I have heard some of the back catalogue, it is this strange and beguiling twelfth album that has completely hooked me.

Marrying complex rhythms and a modern classical sensibility to an exploratory nature allows Richard to make a unique music that would probably fall within the avant sphere if one was looking to conveniently categorise. "Avant"  can mean whatever you want it to, but would always suggest a sense of adventure, and Strange Relations has that in joyous quantities.

The six-part suite of music that comprises Strange Relations was co-written with Muffins' drummer Paul Sears, and the duo are joined in the composing credits on Strange Relations 2 by Kavus Torabi, a man whose musical path seems to be criss-crossing mine with increasing regularity these days. Kavus adds some atypically restrained and effects-free electric guitar playing to the track, giving it a languid, alt-jazz feel, especially in juxtaposition to Mike Ostime's plaintive trumpet.


Richard invests his compositions with a sense of space that allows the listener to float away with his or her imagination, and his ear for melody and subtlety keep this well away from the stridency and angularity that can sometimes be to the detriment of the more wilful exponents of music in the avant world. Strange Relations 1 has an otherworldly quality that I can easily imagine being enhanced by an individualistic voice, perhaps Robert Wyatt? Now there's a combination that would be a delight to behold!

The music of Karda Estra covers a large sonic spectrum, from ethereal psychological thriller movie soundtracks to gorgeous sci-fi waltzes, taking detours into cerebral modern classical along the way. Strange Relations 4 is that sci-fi waltz, and a lovely  thing it is too. Keyboards, guitars, oboe and cor anglais, the latter two from long-time collaborator Caron De Burgh combine in the most sublime fashion imaginable. Part romantic fairground fantasy, part chamber rock, this exquisite music is uplifting and soulful in equal measure.

Paul Sears' playing caresses the rhythms rather than forges them on a drum skin anvil, and the subtlety and grace with which he guides the melodies is fascinating to follow, and I say that from the perspective of one who has never sat behind a drum kit. Most of the other contributing musicians have worked on previous Karda Estra albums, in particular vocalist Ileesha Wileman who has been there from the beginning, whose wordless multi-tracked choral singing imbues another layer of mystery to the already mist-shrouded Strange Relations 5.

The suite unravels in the most unforced way with the final part, highlighting Richard's avant classical leanings. Reflective and wide in scope, Strange Relations is an unfolding musical tale that will delight and intrigue in equal measure.

The album ends with two separate pieces, Ylla, inspired by a similarly named Ray Bradbury short story, and The Wanton Subtlety Of Monna Tessa, a piece of music composed for a compilation based on 14th century Italian writer Giovanni Boccaccio's The Decameron. The former fits in with the musical theme of Strange Relations rather well, Amy Fry's clarinet and saxophone weaving melody in and around Richard's piano and electronica flights of fancy.

The naturally medieval feel of The Wanton Subtlety Of Monna Tessa, Ileesha's one-woman harmonising leading to a descending scale acoustic guitar combining with brass and reeds, transmits a knowing air of implied frolicsomeness. Later, there be shenanigans. A nice "bonus track" with which to conclude an absorbing album. 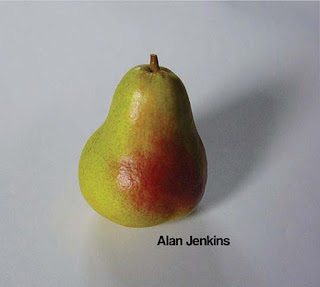 The Kettering Vampires have nothing to do with either definition, nor, disappointingly, are they from Kettering. Welcome to an alternate universe where "Blodwyn P. Teabag records some overdubs on a tune called Shit Weasel", bands are called things like The Thurston Lava Tube, and there is a cult around a long extinct band called The Deep Freeze Mice. This is all the fault of a bloke called Alan Jenkins, as indeed are "The Kettering Vampires". Alan came up with this name for a band that were previously called The Otter Sandwich. According to Alan "A couple of the guys have a history in the business - usually when somebody tells me they have a history I have to send out some hired bastards to erase all trace of it". Alan's name is on the cover because "a record with my name on it automatically ensures seven figure sales and a Grammy". Well, it didn't work for Warhol, so why not?

This is all true.

Guitarist Lenny Ninja Snake here leads his creatures of night on an album covering the iconic Warhol album in a surf stylee, with the track list backwards, and a pear replacing the banana, natch. Lenny, who is part Scotch used to be a balloonist on Pavonis Mons, until his mum told him there was a future impersonating Dick Dale, which Len carries off with no little panache. Transported to Earth to make cheap Top Of The Pops covers albums in the 1970s, Lenny, an anarchist at heart famously drenched Litlle Jimmy Osmond tunes with "twelve minute feedback solos".


Keyboard player Neil Ska, so called because his mum christened him Neil, plays a nifty line in Farfisa organ wheezees and things that go "screeeee". He's a dustman in the real world, his "four O Levels" coming in useful when determining who can be fined for putting some wrong shit in the wrong recycling box. Neil studied "at De Montfort University under Dave Bartram of Showaddywaddy".

Bass player Jack Darkness has been known to spit his own weight in tobacco chews, when not helping Lenny dismantle journalists' psyches, or breaking their knees. Famously attired in shiny boots of leather, it was his idea to mix up the surf with a bit of ska on The Ketts' languidly slack-jawed version of Venus In Furs, that lights up this album like a 40 watt energy saving bulb, taking about 28 minutes to get into gear, or so it seems. Jack also plays a Prepared Bass Guitar. This means it is in tune.

Did I tell you about drummer Minnie Bannister's socks? No? That'll have to wait, then. Minnie, a hirsute woman in her mid 70s is surprisingly adept at catching mice, with spoons, which she also uses in place of drumsticks, to some effect on the appealingly proplapsed take of I'm Waiting For The Man. She plays Prepared Ostrich Spoons. This means the ostrich was cooked.

That was all one barefaced lie.

Links:
Buy this, and other jolly good nonsense, HERE
at September 20, 2015 No comments: