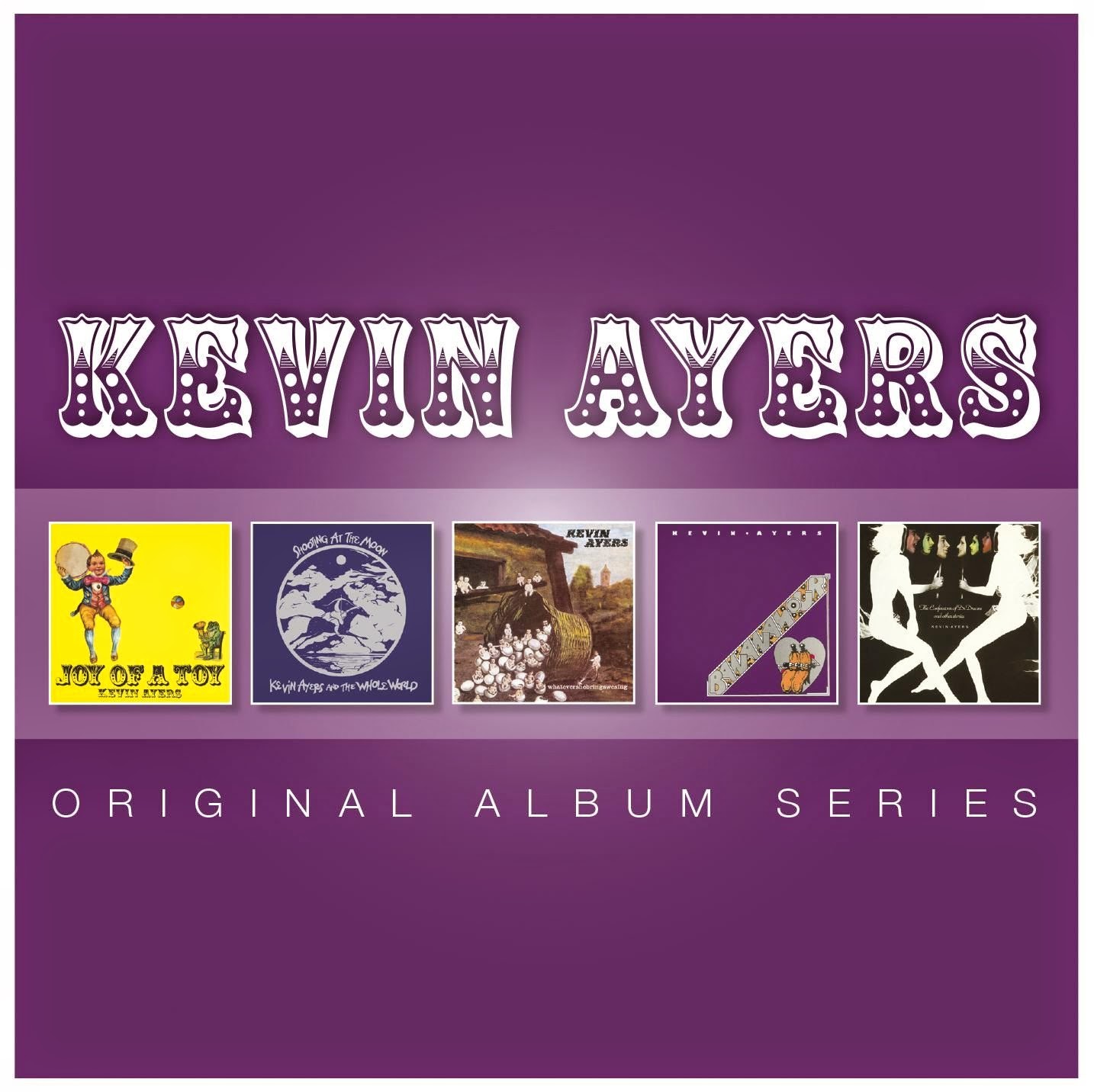 Having a pop at major labels and their transparent remake-remodel stratagems in relation to their legacy artists, releasing mammoth box sets that will in all probability be played in their entirety no more than twice, a ruse aimed squarely at milking the wallets of those of us of a certain age is as easy as shooting fish in a barrel, as the saying goes.

Nope, for once - and it is once, I can't recall it happening before - I am giving praise where praise is due to one of the big players. A major label, in this case Universal, and they do not come any more major than that, has found a neat way to repackage the catalogues of artists from the golden age of rock'n'roll, this time aimed at those of us with more sense than money. This series of releases takes five or so albums from the discographies of artists who for the most part did not quite make the major league in terms of sales, and comes under the banner "Original Album Series". They make ideal replacements for worn out vinyl or as collection gap-fillers. I will now witter on about one of the more essential of these boxes...

As I write, for a mere £10.10 chucked in the direction of the corporate tax dodgers who shall remain nameless you can have the first five, and frankly the best solo albums of the reluctant pop star genius known as Kevin Ayers. The CDs are all the last remastered versions, and the package is a no-frills no-bonus tracks slimline box, and forms a perfect introduction to one of England's finest songwriters. 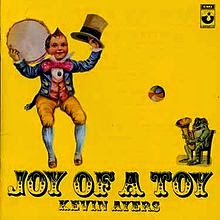 Joy Of A Toy

A worrisome trait throughout Kevin's career was his dodging, consciously or otherwise, of potential success every time it beckoned. The first instance of this came in 1968 when Kevin sold his bass guitar to Noel Redding and fled to Ibiza after the rigours of a seemingly endless Soft Machine tour of the States supporting Jimi Hendrix, who had given him an acoustic Gibson on the promise that he would not, as threatened, retire from the music biz completely. Obviously inspired by Hendrix's faith in him Kevin came up with the songs that would form his first solo album. Backed by his by now former Soft Machine colleagues, including Daevid Allen, and his mate David Bedford, a consummate arranger and musical polymath, Joy Of A Toy sets the scene for Kevin's highly individualistic and accessible songwriting style.

Hints of Kevin's darker side come through in some of the lyrics, but this is mostly a highly enjoyable collection of charmingly naive sun-kissed ditties and daft larking about, its playful nature no doubt in part a reaction to the more earnest direction his former band were headed in.

Highlights - Song For Insane Times, Eleanor's Cake (Which Ate Her), The Lady Rachel 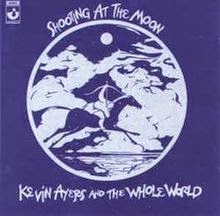 Shooting At The Moon

By 1970's Shooting At The Moon, Kevin had assembled a proper working band around him, formed earlier in the year to tour Joy Of A Toy. Naming them The Whole World, our glorious leader retained David Bedford on various keyboards and occasional guitar, and he was joined by saxophonist Lol Coxhill, whom Kevin discovered busking in the street. Then there was drummer Mick Fincher, and an extremely young Mike Oldfield on bass. Mike's melodious style is evident from the off, taking a lead line in one of Kevin's timeless classics, the wistfully romantic May I?, which works even better in French as Puis Je?, sadly but understandably not available on this "no frills" box set.

Oldfield also gets to play his instantly recognisable lead guitar on Lunatics Lament, and with the benefit of youthful fire in his belly, contributes a full-on psych wigout halfway in. The song, with Kevin on bass and featuring his semi-buried treated vocal is structured like one of the Velvet Underground's rockier ventures as it lurches along in fine acidic fashion.

Contrasting his now trademark and seemingly effortless songs with a fast developing experimental side, Shooting At The Moon shows no little ambition and encapsulates the "anything goes" mantra of the era. In the mad professor's sound laboratory, strange effects and edits punctuate second track Rheinhardt & Geraldine/Colores Para Dolores, and Pisser Dans Un Violin, which luckily for the instrument in question has no violin in earshot. Pisser... features Lol Coxhill in characteristic avant-garde mood on electric sax. This eight minute ending to side one of the original album is an intriguing sound collage that the less adventurous would describe as filler. It isn't, but I will admit it is probably twice as long as it needed to be; semi-filler then, the sort that falls out of that hole in the wall after six months.

Highlights - May I?, Lunatics Lament, Red Green And You Blue 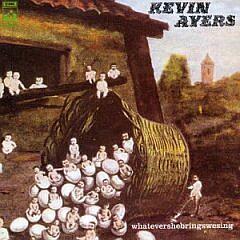 After the inevitable break up of The Whole World came the recording of Kevin's most commercially successful album. Whatevershebrinswesing was released in November 1971 and most of his old road band play on the record, along with cameos from Robert Wyatt and Didier Malherbe. This album saw the fusing of experimentation and straight songwriting that was pioneered on Shooting At The Moon work to its best effect.

This has always been my favourite album of Kevin's and it is a treat from start to finish. From David Bedford's orchestral introduction to the seven minute song suite There is Loving/Among Us/There is Loving to the closing babbling brook of Lullaby there is no surplus fat or throwaway nonsense on this record. Includes perhaps his most well-known tune, the rock'n'roll smoking song Stranger In Blue Suede Shoes, which features some dazzling piano work, again from David Bedford. There are some great contributions throughout from the other players, once more including Mike Oldfield on both bass and lead, and combined with Ayers' growing lyrical confidence, the record is a category-defying masterpiece, with everything from waltzes to dark experimentation at the bottom of a well.

Highlights - put it this way, there aren't any lowlights. If you only buy one Kevin Ayers album, buy this one! 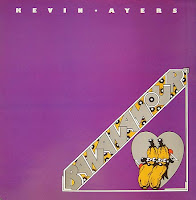 May 1973 would see the release of Kevin's last album for Harvest Records for three years, and probably his most accessible to date for the iconic label. Another new band was assembled under the name Decadence, and there are guest appearances from Wyatt again, and Mike Ratledge. Also appearing is Steve Hillage, who was to be only a temporary member of the band, soon to return to France and Gong. Steve contributes some highly melodic runs to another of Ayers' more well-known tunes, Shouting In A Bucket Blues. That song and album opener, the faux-soul-shouter Don't Let It Get You Down hint at Kevin's battle with demons unspecified, but he was a glass half-full guy, as the lyric "I say to everyone who thinks there's no way out...Baby if you all shout, someone will hear you" attests.

The experimental and psychedelic edges are well represented by Interview and Decadence respectively, the latter with some highly acerbic lyrics aimed at Nico. The album also features Kevin's tribute to Syd Barrrett, with Oh! Wot A Dream being done "in the style of" through a Kevin Ayers filter, with some very touching lyrics.

Around this time Kevin somehow avoided having a hit with the very catchy and very kitsch-calypso single Caribbean Moon, a song that in any other hands would be cringeworthy, but Kevin turns it into a joyous muckabout - you may recall the supremely silly video! Not on this budget version of the album, unfortunately.

While Bananamour does not hit the dizzy heights of its predecessor, it is still a great listen. 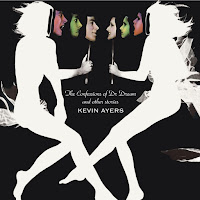 The Confessions of Dr Dream and Other Stories

A year has passed, and Kevin has decamped to Island Records. May 1974 sees the world mostly ignore The Confessions of Dr Dream and Other Stories, the last CD in this rather scrumptious box but the first to feature guitarist Ollie Halsall. Kevin's reaction on first hearing him play was "love at first solo", quite understandably. Ollie, previously with the marvellously tight-but-loose jazzrockers Patto was a much underrated player who could turn his talented hands to any style required, and was easily as gifted as Clapton or Beck. Halsall and Ayers from this point on formed a long working relationship and friendship that lasted until the guitarist's untimely substance-aided demise in 1992.

This time round the idea of "a band plus guests" is abandoned for a long list of illustrious aiders and abetters, including Rupert Hine, Steve Nye, Mike Oldfield, Michael Giles, Nico (they must have kissed and made up!), Geoffrey Richardson, and Lol Coxhill, to name but a few.

It doesn't take Ollie long to introduce himself, and on Didn't Feel Lonely Till I Thought Of You he unleashes some furiously acidic runs that take the otherwise langrous groove off into space. Wonderful stuff! It Begins With A Blessing reprises Ayers' riff from the old Soft Machine song Why Are We Sleeping?, now reimagined as the theme of a smoky psychedelic blues song cycle.

The focal point of the album is the sprawling title track that occupied all bar the final one and half minutes of side two of the original vinyl release. A dark entry with a typical mantra-like vocal from a disembodied Nico warns of Irreversible Neural Damage from too many drugs, maaan, presaging Dr Dream's tuneful presrcriptions and a long surreal trip ending with the Dr Dream Theme, a relentless and slowly building funeral march, the stuff of nightmares. Kevin was never going to leave us dangling in the dark, and the last track Two Goes Into Four is as charmingly winsome as it gets.

This album is far more focused and densely packed than the earlier works and the title track takes a bit of getting into, but once you dig below the surface it is an absorbing piece of work.

Highlights - Didn't Feel Lonely Till I Thought Of You, Everybody's Sometime And Some People's All The Time Blues, It Begins With A Blessing/Once I Awakened/But It Ends With A Curse
...

When it came to the crunch, Kevin Ayers was always more comfortable in the company of a bottle of decent vino and a good woman than he ever was under the spotlight, and he never took himself or the music business too seriously. Kevin was a consummate story teller and bon viveur whose love of life shone through, despite the sense of melancholy that permeates a goodly part of his work, thus illuminating another side of his character. These quirky and infectious tunes will live long in the memory of those of us who love the old-fashioned English eccentric's take on life.

Had he had more ambition, who knows where he may have ended up, but wherever that might have been, the man at the end of that trip would not have been the Kevin Ayers we recognise. As it is Kevin has left us with a good number of timeless songs that do not require their creator to have had fame and success in order to justify their rightful place in rock's rich tapestry.