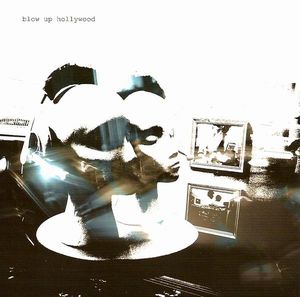 A recent rediscovery for me are this nigh on un-categorisable and enigmatic band from New York. Fronted by Steve Messina (voice/guitar), ably assisted by Thad DeBrock (guitars, processing), Dave Eggar (cello) and Daniel Mintseris (keyboards), the band give no information on personnel on their album covers, and very little on their website, the info here comes from http://www.progarchives.com/album.asp?id=27908

They revel in their anonymity, are not easily pigeonholed and have produced a highly varied body of work since 2002. The band have gone from orchestral minimalism to ambient to prog, and have even tackled the dreaded concept album.

This, their second album, was released in 2004, and is a lovingly produced musical journey through love and loss. Fake it certainly is not. Haunting, melancholic and uplifting by turns, there are ten songs on the album, five with vocals, five instrumentals. A simple but effective musical motif runs through the album like lettering in a stick of rock (rock candy for our American friends), reappearing for the final time on the last track DMK, the oddest of the instrumentals featuring what sounds like backwards keyboards. Buried in the middle of the album is the gorgeous love song Oceans, which you can easily imagine being played in a stadium sized venue, audience with lighters aloft. My only gripe is that the wonderful slide (or bottleneck) guitar break is not long enough - maybe they extend it in a live setting? The title track has another highly personal lyric presumably from Steve, the song starts with a late Floydian sounding acoustic, and builds into a highly atmospheric and climatic coda.

Much as I hate making comparisons, I concede that for newcomers to a band it can be helpful, so here goes. The obvious influence is late period Floyd, but with a slightly less proggy edge. Believe it or not I could well imagine Robbie Williams singing the title track - stop laughing at the back, I mean it in a totally positive way!

Judge their consummate songcraft for yourself at http://www.myspace.com/blowuphollywood . Oceans isn't on the MySpace site, but White Walls from this album is.

An album for an introspective mood, with some lovely songs. Largely unknown outside of the USA, this band deserve to be heard. Buy Fake (and their other CDs and goodies) here http://hollyskite.com/merch.php  cheaper than Amazon!

...or not if you loathe reality shows, especially the lowest bland denominator X Factor. This showbiz behemoth has dominated Xmas music sales for what seems like forever with it's soulless tat. That strange beast the General Public, who watch this show in their millions and then buy the trash it churns out can't be all wrong can they? YES THEY CAN. I've just watched the Robert Plant Electric Prom that was broadcast on BBC4 last week. Now over 60 and exuding a calm authority coupled with an ongoing enthusiasm for searching out new ways to present some classic old countryfied material, with the odd Led Zeppelin classic thrown in for good measure, this guy has something that X Factor contestants will never have unless they have already "paid their dues" or if they go on to forge an extremely unlikely 40 odd year career in music - soul. Call it mojo, feeling, spirituality, it's something a game show contestant whose only experience in music is squawking along to the latest R&B (new meaning - to me The Stones are R&B, not Rhianna (sic) and her ilk) hit in front of the bathroom mirror before being plucked from deserved obscurity by the dreadful Mr Cowell and his cohorts will never have. It's also something that seems entirely absent in Cowell's persona, which is just as well, for how could he live with this shite otherwise?

I may come across as a snob, if so, tough. Most people who claim to like music have zero idea of what actually constitutes the artform in the first place. Right I'll stop ranting now. This year there are a number of campaigns for alternative Xmas no.1's to whatever tosh is churned out by X Factor, and these are some top picks:

Wagner Carrilho - song to be decided

A Facebook campaign is underway to get a Brazilian former PE teacher with a horrendous mullet, who is a contestant on this year's XF, but awful in a tuneless and leery Working Man's Club way, to win the damned thing, thereby getting him a contract and Xmas record release on Cowell's label. This would undoubtedly annoy Cowell no end, as it would usurp his plan to get this year's pretty boy/girl combo to the top slot, so it has to be approved! Wagner has allegedly said "the show stinks like a set up", so he's not as daft as his haircut might suggest.

The Situationists and indeed my fave - the idea of having over four minutes of silence at No.1 for Xmas is full of delicious irony, and not just as a poke in the eye for XF. The Facebook campaign goes under the name Cage Against The Machine, no doubt in honour of the successful ruse from last year when Cowell was suitably humbled by being told "F*ck You I won't Do What You Tell Me". Marvellous!

In honour of the tenth anniversary of MacColl's untimely and sad demise. A pretty straight campaign this one, but you can't argue with one of the best Xmas No.1s ever (or No.2 depending on which chart you believe) making a return.

The original 60s garage rock'n'roll classic, brought to prominence via the cartoon Family Guy. My first contact with this song was The Ramones' version from 1978, but this is better. Definitely the feelgood choice.

Has no chance, but is very funny in an unreconstructed fashion - the lyrics have to be seen to be believed! Not for the faint hearted.

The Wombles - A Wombling Merry Christmas Why?

According to right wing leave-your-brain-at-the-door rag, The Daily Mail, this in with a chance. Again, why? Bloody awful, but if it keeps Cowell's mits off the No.1 spot, all the better...

I want to like this band, I really do. You see, my best mate raves about them and I like to support struggling bands, so I've just pre-ordered their forthcoming labour of love The Octopus, which comes with 70 page book all made without the help of a record label no less. You have to admire ambition like that, and at £30 I'm hoping it's an improvement on their previous full album, Insider, released in 2006.

In preparation for receiving this mighty work, I thought I would give their sophomore effort Insider a spin. This is an album I've often overlooked in favour of their more immediate self titled debut. The three piece make a good fist of wall of noise guitar rock with the odd sound effect thrown in for good measure. The problem I have with this is a distinct lack of light and shade and a lack of dynamics which leads to it all sounding a bit samey from about halfway in. There was only one modern(ish) three piece guitar/bass/drums band who managed to keep my attention  for the length of an entire album and that was Sugar, who understood a thing or two about writing a melody and creating a dynamic structure that kept you on the edge of your seat.

However, I don't want to create too much of a downer, as taken individually there is some good stuff on this album, it's just I find it hard work as a whole entity. The opening instrumental Gustav's Arrival is a feisty rifferrama that would not be out of place on a Metallica album. The title track is the best song on the album for me, and lyrically we are seeing a theme develop. Everything is not as it appears, or so we are led to believe. By the time we get to R.I.P. we are told that "only luck keeps us out of the coffin" - well it might if we were all steeplejacks, but this one then veers off into sci-fi territory, as do a lot of songs on this album. Nothing wrong with that, but I think driving force Sel Balamir (guitar/vocals/lyrics) would be better placed writing lyrics that actually have some anchor in the real world. Some of the lyrics on here make no sense at all "o Fortuna" being the maddest of the lot. In places, lyrically at least, they are in danger of turning into Muse, which although good for their bank balances is not something I want to contemplate. I think Sel reads too many comics!* Musically they are close to becoming heavy metal in places, another development I'm not too sure about. Strange Seas Of Thought is a highlight, with a recurring guitar motif woven cleverly into the fabric of the song. The lyrics are not bad either, even if a bit sub-Hawkwind. Elysian Gold brings us back to planet Earth with a hard rock love song no less. Oort is another driving instrumental, thank goodness, as with a title like that, who knows what universe the lyrics would head for!

In conclusion, not a bad album per sé, more a collection of some very good and some less good rock songs. Legend has it that bands suffer from "difficult third album" syndrome, but hopefully Amplifier are through that stage with their second album. I reckon I should have reviewed their much better debut instead!

* I've been told since that Sel does not read comics! He has a strange mind in that case.....


Go here to read about their much anticipated soon come epic, and hopefully not "difficult third album", The Octopus:

..and go here to pre-order The Octopus:

This is No-Man's fifth album originally released in 2003. No-Man is a collaboration between vocalist and lyricist Tim Bowness, and Steven Wilson, or "The Hardest Working Man In Showbiz" and this album is a collection of minimalist near ambient and sometimes avant-garde soundscapes over songs that drift along in a dreamy but never unfocused way.

Tim's lyrics are heartfelt paeans to the break up of a relationship as the title track suggests, and melancholy memories in the gorgeous ten minute Photographs In Black And White, amongst other introspective and abstract delights. His voice breathily wanders in and out of the guitar and soundscapes ambient mix, and a harmonium is in there too....and a clarinet...lovely.

If I were to compare Tim's voice with anyone, it would have to be David Cassidy - I kid you not! He has the same range and breathy style. The comparison is purely in a sonic sense, as there any similarity ends.

Reference points include The Blue Nile, and, well not much else really, as it's pretty unique, and No-Man are waaay more productive than the Scottish band, having released six full length albums as well as numerous EPs, DVDs etc in their eighteen year existence, and along with more well known names such as Talk Talk and David Sylvian have helped invent post-rock as we know it. I suppose if Nick Drake had been around in the 21st century, he may well have sounded like this, it's that good.

The curious and the uninitiated are drawn to this long running two man collaboration probably because of Steven Wilson's involvement. Those who have a desire to search out something different will soon be beguiled, but those who are expecting any of Wilson's rock influence, and are not open to other forms of music, or have a simply short attention span will doubtless be disappointed and wander off. It's their loss.

Together We're Stranger is a delight, and I recommend it highly.

A career spanning double cd was released in 2006, taking its title from a song on Together We're Stranger, and is a great starting point for the curious: