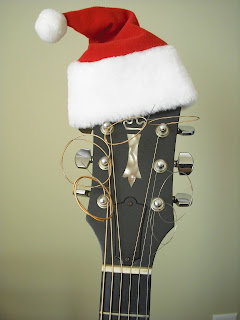 It's December 28th, and I have only just started typing this. You see, I wasn't going to bother doing my usual "Best Of" thing this year because my mojo has disappeared so far south, it's shacked up with a colony of penguins off the Megellan Strait in Chile, and I am quite enjoying my current extended hiatus from churning out reams of wurdz that no-one reads.

However (you knew there was a "however" coming, didn't you?), my good friend and wrangler of guitars, Mr Matt Stevens, posted this on his page:

""We’re so pleased so many people are discovering the band thanks to the end of year lists. Cheers for listening to weird stuff 😊"

It made me think that even if one person picks up on something I mention in my version of The List, then it's worth it. I was also inspired to once more take up the virtual Sheaffer by the typically po-faced ranting of a well-known interwebs music journo against The List wherein he gave reasons, in the form of...a list, as to why end-of-year lists are WRONG, and he is RIGHT - no change there, then. Cor, such cutting i-ron-ee, eh, how can I possibly compete? Why, by delving into my small but perfectly formed List of 2018, that's how. Read on, start a revolution, or put the kettle on!
...

This time I will try to keep it relatively short'n'sweet, with the year's highlights in rough chronological order followed by a straight list of those albums that rattled my cage without picking the lock. Right, here goes...

The beginning of the year saw the hep cats groovin' to the big fun pop-prog produced by Norwegians Dobbeltgjenger on their album Limbohead. This is music for folk who answer the door wearing nowt but a shocking pink merkin and a leery grin.

Unapologetically ROCK, Poland's Weedpecker with their third album saw any hints of pretension given a good kicking, right down to the album title, III. This Brobdanigian stoned colossus tramples everything underfoot, in between being rilly, rilly chilled, maaan. From the reefer-stewn deserts of the hinterlands of Warsaw. Possibly.

Changing tack into more considered waters, we visit the shores of a Swiss lake where we find an unlikely but inspirational hook-up. Swiss tri-tonal minimalists Sonar get down with avant-guitar slinger David Torn and produce one of the best records of the year in Vortex.

Cheer-Accident are veteran dwellers of the far flung fringes of modern music, and Fades is their 19th album, and it shows as much zest as a lot of debuts. The Chicagoans this time come up with some deep pop moves, including Monsters which has a relentlessness about it that The Fall would have been proud of. They are much more polished than the wilful Mancunians, of course! Oh...and Sacha Mullins' vocal on I'm Just Afraid are a delight, and worth the entry price alone. Sticking with the avant fringes, Jack O'The Clock are a band even more obscure but no less beguiling. Repetitions Of The Old City II is this year's model. Veering from avant chamber-folk to complex art-pop, sometimes within the same song, this unique band is led by a musical wizard by the name of Damon Waitkus from within a fairy grotto in the mist-laden forests of Erewhon, and they just get better and better with each release.


I'm told this is "smooth jazz", but categories are bunk. Kamasi Washington is the name and Heaven & Earth is the album. Unlike another recent(ish) album of the same name, the grandiose title here finds itself given a true vision, and is treated with suitable respect. You will also find sweeping arrangements and bags of swing, not to mention soul by the bucketload, something I find lacking in that other jazz/fusion band currently filling halls wherever they go. While jazz purists might consider both Kamasi Washington and Snarky Puppy to be coffee table jazz for folk who don't really like jazz, give me the raw humanity of Mr Washington's combo and the odd duff note they are prone to in a live setting over the clinical technical perfection of the Puppies all week long, daddio.

Oh, and whose effin stoopid idea was it to seal, yes actually seal, the bonus disc inside the middle panel of the CD case? Everybody knew it was there, so why make folk destroy the damn packaging to get at it? Apparently it was similarly hidden in the vinyl version, which given the vinyl LP's general allergy to sharp objects probing about in its vicinity has to rank as the most coke-fuelled marketing mistake this year. Twats.

And... breathe out... Well, there had to be one actual "prog" album in here, and Regal Worm's glorious Pig Views is it. A double album on shocking pink vinyl? Yes please, mista. Possibly the most gloriously fulsome sound of the year. Without descending into cliche anywhere and without sounding anything like Genesis or Yes, it's still "prog", and a bloody good job too!

I never thought I'd be putting an Arctic Monkeys album in one of my lists, but prejudices are there to be overcome, say I! Tranquility Base Hotel & Casino, in which Sheffield's favourite sons complete their transformation from awkward and frankly irritating agit-pop oiks into a world of arty ultra-sophistication seen through swirls of Gauloise smoke from an observation deck on the Moon, is something of a classy revelation. Any band that generates 30% 1* reviews from its hidebound fans on Amazon must be doing something right. Fans don't like "their" band taking risks, doncha know!

Back in the land of exotic fruit, how about Sheffield's (third time in this list - must be summat in the water, 'appen) Orchestra Of The Upper Atmosphere, and their fourth mash up of the Kosmische, world music, and general avant strangeitude, entitled θ4? This time they've reigned in their excesses and restricted themselves to a mere near-eighty minutes of music on one CD. In places you can dance to it. Jah Wobble would approve.

All Them Witches had the keyboards take a back seat on Atw which allowed guitarist Ben McLeod to fling riffs and melody lines into the gaps with swaggering panache. Dig that groove, rainy day, dream away...


Another complete change of direction sees us getting all cerebral with Edinburgh's North Atlantic Oscillation and their fourth album Grind Show, here's what I said when I made notes at the time -
If The Beatles were a synth pop band with a propensity for grandiose arrangements, they might have written Spinning Top. Following track Sirens is monster, o yes... and then there's Downriver. Heck, just go give it a listen. Sample heavy - the many brass samples are a delight - and thankfully uncategorisable, this is one of those albums that I thought had passed me by, but Phil H wouldn't let it lie. And so it crept into my ears and went KABOOM! PLAY LOUD.

Staying in the land of chin-stroking, Thumpermonkey gave us Make Me Young etc. From a whisper to a scream, the ideas on display here are neither colourless nor green, but occasionally they are indeed furious, to quote their previous album which seems like an aeon ago. This new album is bigger than the largest thing you can imagine, and expanding all the time.

Finally, a truly wonderful racket to caress your ears at year's end, namely the new album from American sonic adventurers Far Corner that goes by the descriptive title of Risk. Who needs a lead a guitar? Not these folk, who make a thrilling amalgam of chamber rock and avant stylings with a truly devilish panache. Lovely!
...

It remains for me to thank Jez, Bob, & Rob at TPA for putting up with me, Phil L for being great company and as mad as a as a as a... spoon, Phil W for allowing himself to be deafened at the many dives I've dragged him into over the year, and Phil H for being a mad bastard no longer 200 yards away, but 300 miles away. That's a lot of Phils, innit? All Two Els, too - what are the chances of that? Oh, and ta muchly to any and all of you lot who have read this far and probably also read my increasingly intermittent music-related wibble on the interwebs, be it here, at TPA or anywhere else. May 2019 not be quite as scary as most of us with any gumption know it will be!