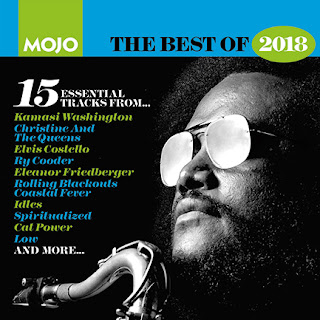 Here we are again, another year nearly gone by, another "Best of" CD to have fun with. They seem to come out earlier every year!

Idles - Great
Bristolian flavours of the year dip into their grandad's post-punk collection, add in some Iggy, both vocally, and via the chaos at their gigs, and come up with 2018's attempt to breathe life into the rock corpse. If I was 18 I'd love this racket. I quite like it at 307, as it happens. OK, this band have one idea, but they do it very well, and having one idea never did Coldplay any harm, did it? They even woke up Later for 5 minutes earlier in the year, for which many thanks are due.

Rolling Blackouts Coastal Fever - An Air Conditioned Man
Another band who take their cues from the explosion in sounds that happened when the dust settled after the Punk Wars, this time from their Antipodean ancestors from that time. This song is giving me Go Betweens plus added swagger. Not bad at all. Oh, and definitely Band Name Of The Year!

Elvis Costello - Stripping Paper
Only a wordsmith as accomplished as Mr McManus could write a surprisingly warm self-examination ostensibly about decorating. He may be mellowing with age, but with The Attractions.... sorry, Imposters behind him he can still come up with the goods.
This song is superbly recorded,the sonics on this track are sublime, and the bass sound alone is worth the entry fee. Otherwise talented but cloth-eared new artists (Syd Arthur and Ryley Walker spring to mind) take note.

Cat Power - Woman
I've heard of Cat Power, and I'm vaguely aware of her feminist credentials. Knowing that means that this ditty is deffo not aimed an gnarled old scrote like me. She sings "I'm a woman" a lot on a decent enough pop outing.

Christine And The Queens - The Walker
Another one that passes by my bathchair, more hurriedly than Cat Power as it is driven by an annoyingly obvious electronic rhythm that a child could have come up with. The song itself is pretty forgettable too.

Young Fathers - Border Girl
Another new one for me, this lot make an electronic bass-driven racket that I can imagine Peter Gabriel making now if he'd been born in 1993.

Low - Disarray
Veteran miserablists go glam, but quite slowly, obviously. Actually not bad. After all this computer music I'm beginning to long for some humans playing instruments.

Kamasi Washington - Will You Sing
Humans, you say? Well, it doesn't get much more organic than this, from MOJO's #1 album of 2018. Kamasi leads the way in the age of nu-jazz. More soul in this one song than an entire album of puppies.

Fatoumata Diawarra - Nterini
Italy-based Malian (good luck with that, you might need it) singer with connections to Damon Albarn via his African Express adventures. Familiar African female vocal gymnastics and modern rhythms combine to make a finger-poppin' pop choon. Further investigation needed, as I've always been hypnotised by the African beat.

Gaz Coombes - Oxygen Mask
I have toyed with buying Mr Coombes' highly praised latest solo album, it being recommended by a mate as well as the press. This particular track is a fine example of singer-songwriter melancholic reflection without getting maudlin, with a great arrangement thrown in for good measure. Another one I will have to check out, methinks.

Ry Cooder - Straight Street
Mr Cooder and his guitar. Not much more to be said really. If you know the name you know how it pans out. If you don't you must be under 40, and a treasure trove awaits. This is where Americana came from.

Spiritualized - Here It Comes (The Road) Let's Go
Stonesy blues number from Jason's twenty-one-year comedown. It seems Primal Scream have have a rival.

Gwenno - Hi A Shoellyas Liv A Dhagrow
Celtic rebel Gwenno Saunders' first album was sung in Welsh, and apparently the follow-up is in Cornish. Breathy vocals singing a song about which goes on first, the cream or the jam. I may have made that up. The music has a woozy psychedelic pop soundtrack feel, which complements the wilful obscurantism of the lyrics to anyone born east of the Devon border, and probably to most pasty munchers, too. Actually rather alluring.

Maisha - Osiris
MOJO bigs up this London band as the closest thing we have to Kamasi Washington, big praise indeed. They're right too, by the sound of this. Yet another one waiting to snap at my wallet.
at November 17, 2018