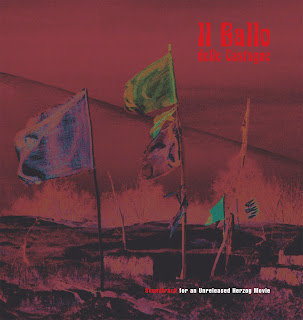 My last encounter with Italian musical mavericks Il Ballo delle Castagne was 2012's Surpassing All Other Kings, a Gothic-tinged Rock Progressivo Italiano album of some merit that nonetheless maybe tried just a little too hard.

This new album is an altogether different kettle of fish. As its title might suggest, Soundtrack for an Unreleased Herzog Movie is the musical backing for an imagined film by the famous German art-house movie director.

Herzog's grandiose trips into the filmic equivalent of Wagnerian drama, often with religious themes lend the band a neat tie-in to their own Gothic soundscapes.

Heavenly and slightly removed choirs illuminate opener In The Garden of Popol Vuh, itself paying tribute not just to the film maker but also to the iconic German band who contributed soundtracks to many of Herzog's films. Suitably low-key, this is followed by more tribute to Florian Fricke's marvellously ethereal band, as synth space whispers weave through harpsichord notes before an understated organ chord progression takes hold, giving the piece an early Floyd feel. Then comes the more upfront Il Pianto di Cristo su Gerusalemme which features narration in Italian from leader Vinz Aquarian and more of the heavenly choir.

Psychedelic Middle Eastern atmosphere permeates Profumi di Oriente, and more Italian narration  features in the closing and longest track Sicut in Caelo. Built around a neo-classical piano melody from Marco Garegnani, who plays with style and restraint throughout, the tune takes a stately and unhurried progression to a dusty corner of introspection, moving from lento to moderato and back again, with synth embellishments occasionally making eddies in the dust motes dancing in the sunbeams. A tune to get lost in.

Of the two albums I have heard from Ballo di Castagne, this is by far the most realised and mature, and if you are a fan of Popol Vuh, look no further! Soundtrack for an Unreleased Herzog Movie hints at good things to come from this intriguing band, who are taking modern RPI somewhere a little off the beaten track.

Note - originally released in a very limited run of 100 on vinyl on the Hau Ruk! SPQR label, it is not immediately apparent where you might get hold of this album now. I suggest you contact the band through Facebook. 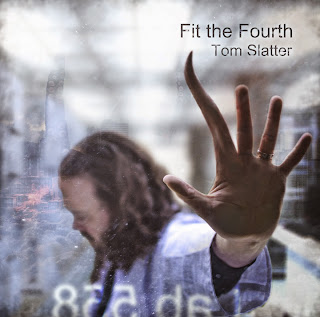 Elliott, the wizened great-great-great-grandson of Frankenstein has created a new monster. This he achieved by scraping some DNA from the purloined plectrums of Roy Harper and Nick Saloman, then mixing those strands together in a draught concocted from the musk of six saintly shrouded men, the stings of seven gypsy cuckoo bumblebees, and the spittle of Beezlebub and Bill Bailey. This vile brew was then left way down in the dank atramentous depths of Wookey Hole for exactly seventeen days, three hours and sixpence-halfpenny, whereupon Elliott returns to the potion and weaves his dark magic. There be a-stirring and a a-grunting, and afore ye know it, there stands before his creator a swivel-eyed loon babbling in a semi-coherent fashion about creatures escaping from laboratories, and men growing fins..."Where's me supper, master?"

Bbbbrrrringgg...bloody alarm...Meanwhile, back in the real world, Londoner Tom Slatter is a composer of songs, some rhyme, some ching, most of them are clockwork...am I still dreaming? Quite a few of these tunes, though not all by any means take a lyrical dalliance with steampunk themes to, well "conclusions" is probably too definite a word, but they take them somewhere suitably strange. Me, I know less than zero about steampunk...does His Dark Materials count?...so I'll just stick to the crazy-paving impressions that Tom's music has made on my auditory cortex, if you will indulge me further.

Fit The Fourth, possibly taking its title from the fourth episode of the first Hitchhiker's Guide radio series, is unsurprisingly Tom's fourth full-length album since his debut in 2009 with Spinning The Compass. It is also the first thing I've heard by this quintessentially English eccentric-in-the-making. Describing his music as "...Nick Cave...writing songs with Genesis after watching too many episodes of Dr Who", the resultant aural stew is a heady affair, with touches of prog, acid rock, folk troubadour, and indie all put through a retro-futuristic turbo-charged blender.

The album opens with the aforementioned tale of creatures escaping from laboratories, infecting the world with their spores. It is followed with a musically grandiose and Gothic-themed tale of the trial of "Seven Bells John", a steampunk character whose story is told through earlier albums, leading up to the denouement on the 20-minute epic that ends this album. Tom's imagination is a rampant beast of a thing that heads off into dark corners only to come back with gory tales of post-apocalyptic dystopia, souls in torment, alien insect creatures and fish-men, and his music is not exactly straightforward, as you might expect.

Playing nearly everything himself, the album shows that Tom knows his way around an arrangement, as for the most part it all hangs together rather well. The music matches the sweeping cinematic vistas of the lyrics, especially in the closing epic. Seven Bells Redeemed is a progtastic affair that runs the gamut of complex mathrock blended with snatches of sympho-rock that thankfully for once never fall back on the dreaded Tony Banks synth patch, that being a grating trait of many modern prog bands. "Neo" this definitely ain't. An early impression is of Van der Graaf-like epicness with less emphasis on keyboards and added meaty guitar chording and intricate sympatico soloing, all driven along by Tom's beefy one man rhythm section. Tom might be the first to admit that he can't sing in the recognised sense, but makes up for it with an individuality that is certainly distinctive, much like my early reference, Nick Saloman.

If you read my nonsense with any regularity, you will know that I have little time for the modern prog epic, as most seem to be instantly forgettable and simply long for the sake of it, but Seven Bells Redeemed is somewhat different. Although not making much of an impression after the first couple of spins (do mp3s spin?), I find myself increasingly lost in its sticky web following repeated plays, helped along by the highly imaginative lyrics. This guy should write a book! I won't reveal the whole tale of this sprawling and labyrinthine burst of musical and lyrical derring-do, you'll just have to get the album for yourself when it comes out on June 1st (pre-order link on the Bandcamp page, link below).

With more than a touch of the baroque, and most definitely beserk, Tom Slatter is an electrified steampunk Roy Harper for the delectation of the modern antiquarian.

Billy Bottle & The Multiple - The Power 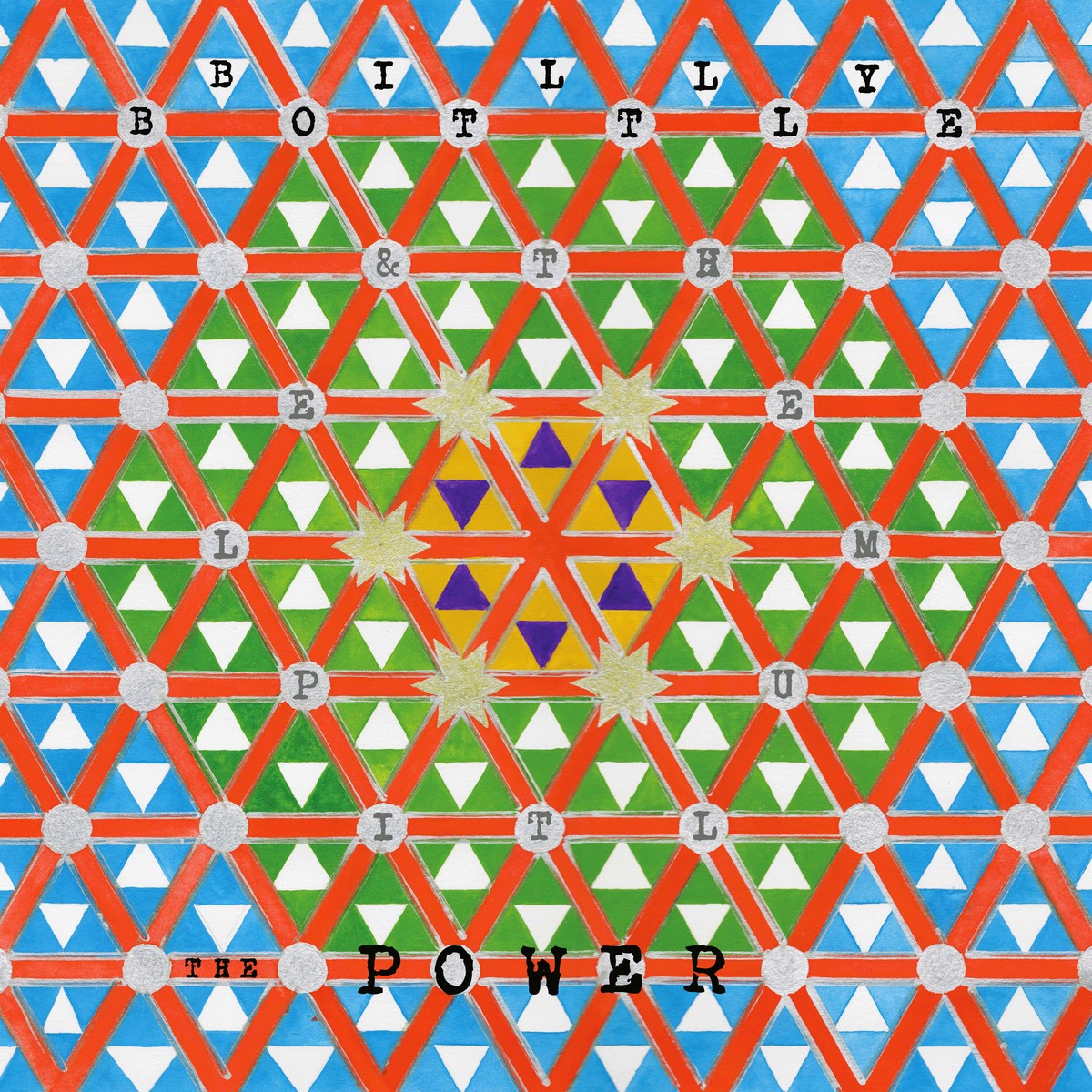 Hey, what with the election looming what better time to STOP BEING SERIOUS and take a trip into the wacky fun-filled world of Billy Bottle and Martine Waltier, aka Billy Bottle & The Multiple.

When not cavorting around in the altogether promoting their love of naturism, or whatever it is they get up to down there in deepest Devon, these two warm hearted and lovable people make some rather good grooves.

After the critically acclaimed (well, by me, at least) and fabulouso Unrecorded Beam album of last year, the duo next popped up in the unlikely environs of TV talent show The Voice, where they wowed Mr will-i-am and the wider nation with their version of 1990 disco smasheroonie The Power...

Well, now you can enjoy a specially recorded version on one of those shiny disc thingies, encased in an individually knitted cosy, courtesy of Billy's mum. I kid you not. For those of you who prefer the intangible, it's yours via the interweb in a fantabulous stream of zeros and ones, packed as densely or as disparately as your ears may desire. With added glissando guitar and swelling organ, the tune turns into a psychedelic rap of energetically toe-tapping proportions. Mr & Mrs Bottle have made a typically charming video to go with it, with a touching tribute to Daevid Allen at the end...

The other songs on the single are La Belle Époque, an effortlessly funky ramble living in a bubble, cossetted from the harsh outside world, and O Nature, a cut from the band's Unrecorded Beam album, one of last year's best, yes sirreee! You know this already if you've read my gushing prose on the subject over at TPA.

Combining their good times vibe with the furrowed brows of election week, the pair are embarking on a whistle-stop train tour of the south of England ending up at Westminster under the banner "Don't Just Vote - Vote like it matters, act like like it doesn't" - these are the dates:

Fri May 1st. Phoenix Sound (Newton Abbot) 9am
(train arrival times) Teignmouth - 9:45
Dawlish - 11:03
Dawlish Warren - 11:50
Starcross - 12:58
Exeter St Thomas - 14:03
Exeter Central - 15:19
A detailed google map will show where they will be.
In the meantime here's an overview - with 6 stops in between.
Sat May 2nd Exeter - Bristol
Sun May 3rd Bristol - Southampton
Mon May 4th Southampton - Brighton
Tues May 5th Brighton - Canterbury
Weds May 6th Canterbury - Whitstable
Thurs May 7th Whitstable - Westminster (MILK FLOAT AWAITS)
CD copies of The Power EP will be to hand plus other goodies too!
Come and join the party...

More info HERE, including a Google Map of the route...

If you can't make that, groove up your Bank Holiday, and buy this West Country booty HERE.
at May 01, 2015 No comments: