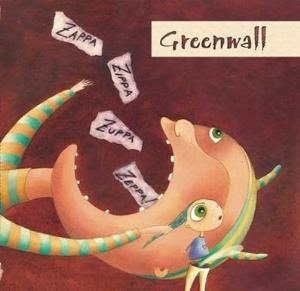 Greenwall is the project of Italian keyboard player, multi-instrumentalist and composer Andrea Pavoni. Starting the group as far back as 1999, Andrea says the name came from a combination of his favourite colour and a reference to Pink Floyd's The Wall. Andrea used to be part of a Pink Floyd covers band, but you'd not know it listening to this album.

Filling the total time allowed on a single CD, the album takes a while to find its feet. Zappa Zippa Zuppa Zeppa! opens with the acapella Superprezzi, an angst-filled lyric welcoming in the working week, and my introduction to the band from the Progstravaganza: Timeshift compilation of last year. An atypical but intriguing introduction too, for it led me to enquire about the album. Andrea persuaded me to take the hard copy rather than a download, and I'm glad I did, as it is lavishly presented, with lyric booklets and fine artwork, and not forgetting the DVD included in the package, more of which later.


After Superprezzi, the following three songs take in various soft-rock and pop styles, all led by Michela Botti's female crooner's sultry tones. Ma le melo no (Not the apples) puts me in mind of an Italian early Suzanne Vega, as Michela tells us she is "drinking Jasmine tea and creating new art". I know this, for although entirely sung in Italian, the sumptuous packaging includes a booklet of lyric translations into English, a helpful inclusion that other foreign language bands would be advised to follow for the aid of us linguistically challenged English speakers!

To be honest, this album so far is all very pleasant but does not do anything for me. For a man supposedly steeped in the Rock Progressivo Italiano tradition, Andrea has so far shown none of that in the music on offer...but things start to get more interesting from here on in. A smooth jazz instrumental with laid back Clapton-esque guitar precedes E' solo dopo che c'è la luce (Only after will there be light) which musically sets the tone for the rest of the album. A spoken word intro telling the tale of a dash for freedom leads into some lightly classical melancholy, and into the next track Non c'è mai tempo per niente (There's never enough time for anything), which after some drumming off the beat becomes a piano-led jazz rock instrumental, with some nice guitar work.

We have left the soft rock songs of the beginning and now the album has become more confident and assured. Always pleasant and never strident, we wend our merry way around little known parts of the Italian hinterland to a Latin rhythm, a spring in our step.

After the trad-jazz trio version of Superprezzi (scat version) we arrive at the longest track of the album proper, Prelievo ("Outflow" according to the booklet, but maybe for once Google Translate is closer, given the English lyric translation, when it came up with "withdrawal"). Venturing into a more expansive jazzier universe, the tune becomes almost avant with some dissonant guitar presaging a spoken word poem, noises off and odd time signatures as the bass and piano wind round the theme. Michela takes us over the bridge to the classical second section of the song, as Andrea's string arrangement builds to the crescendo with the returning vocal theme from Michela, musing on whether or not there is anything beyond the physical world. All in all a skilful arrangement consummately executed.

The remainder of the album offers more of the by now familiar light jazz and classical styles, replete with a few mildly quirky production flourishes including a folk hoedown and a funky guitar strut, and a nice guitar solo in the middle of the love song Due finestre, una collina (Two windows and a hill). While not necessarily the kind of thing that sets my musical pulse racing, Zappa Zippa Zuppa Zeppa! is certainly well played, arranged and produced. If I were to attempt to bracket this music it would be "Italian pastoral".

We conclude with the 16-minute bonus track Il Petalo del Fiore (The petal of the flower) a portentous epic introduced in true prog style on keys emulating a church organ. To allay any doubts that we have now entered the Land of the Concept, the three parts to this song are entitled "Birth and the solemn advances of doubt", "The Truth in all Denials", and it concludes oddly enough with "Entrance". This piece of music calls on the influence of 70s RPI and symphonic prog in general far more than the main album which maybe not surprising as it is a re-recorded version of a track from Greenwall's first album, released back in 1999.

Making the whole package real value for money is a DVD that includes the Superprezzi video, both in standard and "Director's Cut" form, documentaries, interviews with various band members, all with English subtitles, demo versions, and a video for Greenwall's intriguing medley of their own Il correspondenti c'è? Non c'è! and Crim's Larks' Tongues in Aspic (Part 1) and Walking on Air.

While not necessarily all to my peculiar musical taste, this whole package is well played, composed, arranged and meticulously presented.

Interview with Andrea Pavoni on Prog Archives
at July 26, 2014 No comments: