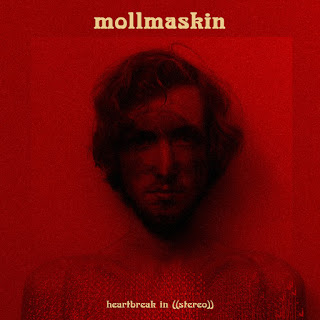 Sometimes, the good ones almost get away...

I gave this album to a colleague at TPA a while back as I had too much on at the time. It was only on reading his review that I thought I had better give it a closer listen, and I am so glad I did.

If Beck were from the land of the long nights Morning Phase may well have sounded like this. Dreamy, psychedelic and dripping with the kind of melancholy that could only come from Scandinavia, Heartbreak In ((Stereo)) is a masterful work.

Fusing dreamily woozy folk-psych with indie, dream pop, and jazz stylings, all with a Nordic experimental edge, Norwegian troubadour Anders Bjermeland as Mollmaskin has made the ultimate "one man band" album. As his producer Rhys Marsh has it, "Last year, I had the great pleasure of recording of the debut Mollmaskin album. I made coffee, positioned microphones, sat back and pressed the record button as Anders spent two weeks flying around the studio, playing everything in sight. He completely blew my mind. I'm so happy I got to witness that, let alone be a part of it. To me, the album is this generation's 'Innervisions'".

Well, I wouldn't go that far, but boy, this is rather good!  Anders is the main man behind folk-psychers Flashback Caruso, and it brings a smile to my timeworn fizzog to see that he has continued the Faust connection with a wonky fogbound cover of that iconic German band's already off-kilter love song Jennifer, but the real meat around the bones of this record are Anders' own highly individualistic compositions, which constitute the rest of the album.

The Same Ash drips with swirly psychedelic guitar, while Never Able marches bold with brass to a wonky rhythm. Lyrically an impressionistic fatalism runs through the core of the "Left Side" songs, Anders musing that ultimately we are in an ever-repeating treadmill of war, life, love, and labour: "in a loop, in queue until last breath repeats the phrase, then silence" as Two Moods has it. Although the subjects differ, the songs retain a Nordic melancholy throughout, and the "Right Side", which seems more concerned with matters of the heart continues that air.

The Norwegian lyrics to Halvtom Sjel (half-empty soul) are rendered probably even more abstract by the vagaries of Google Translate, but seem concerned with a recently broken romance, and Dirty Linen is a simple tale of unrequited love. The album's longest track Nightmare City Suite is a gently swinging affair of regret and revenge that has the protagonists dancing a sinister waltz of "heartbreak in stereo, jogging on alcohol through you". The downbeat theme is complemented by the jazz-symphonic weariness of the tune, and is the kind of thing that would not sound out of place on a Tim Bowness album. A tragic but lovely and careworn melody for those introspective moments.

The romantic theme briefly over, we return to matters more abstract. A part of our soul dies when a hero passes on, and The Death Of Lennon is a winsome combination of electric piano, Beck-like harmonies and dream-pop moves that make for a sublime trip musing on the passage of time, and it may well turn out to be my favourite song of the year, containing as it does some of the best poetry on the record:

The album signs off with the bitter taste of love gone sour as Anders sees the only way out as being to "find the common ground and go to war". One hopes his private life is not as bleak as this album paints it! The musical climax is built on atonal chords and melodic piano lines, and brings to an end an album that is both a musical and lyrical triumph.

If you appreciate great songwriting that arrives with a hardened heart after many miles travelling through life and the musical left-field, then you owe it to yourself to buy this fabulous record!