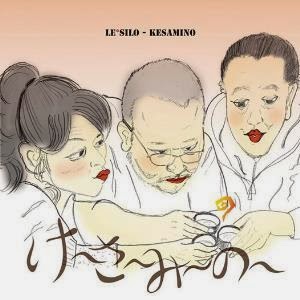 This is the third album from Tokyo trio Le*Silo, an avant rock band formed in 1999 who had to wait five years before being able to record and release their first album 8.8, relatively quickly followed in 2006 by the second, the snappily titled 3.27830. The gap to Kesamino, their third album has stretched to eight years, and in the 15 years of their existence the fairly low levels of activity, with the three members doubtless going off to take part in other projects has allowed the group to remain constant, with none of the comings and goings that may have occurred in a busier group over such a long time.

Prog Archives refer to the band as playing "a widely influenced blend of demanding prog rock, which mostly takes the form of RIO and avant-jazz, with punk-rock stylistics, which is not only captivating, but well played", which apart from unnecessarily describing Le*Silo as "prog rock" will do for starters.

If you follow the PA link above, scroll down to the first review, of the group's second album, written by a Japanese fan in that inimitable style the Japanese have when manfully coping with a different alphabet from their own...or possibly he wrote it in Japanese and stuck it in Google Translate, who knows? Whatever, the surreal and spiky but oddly amusing prose probably sums up the band's sound as well as I can.

Of course, I'm not getting out of it that easily, so here goes...

The main songwriter is piano player Miyako Kanazawa who contributes nine of the thirteen tracks on the album. She is or has also been a member of Japanese Zeuhl collective Koenjihyakkei led by Ruins man Tatsuya Yoshida, for I know very little about that band and it is difficult to tell if they are are still active. However, the left-field pedigree is present and correct, as guitarist Yoshiharu Izutsu and drummer Michiaki Suganuma were originally in another influential avant-rock band, Elegant Punk.

Miyako belies her elfin appearance with a fierce vocal style reminiscent of Yoko, taking in the occasional scream and yelp. Wisely, the strident vocalisations are kept to a minimum and are fairly low in the mix, so never become obtrusive. Her piano style is obviously classically influenced, and for a band who often tread the Zeuhl path there is one big surprise in their sound - there is no bass guitar! A thunderous bass flattening all before it is one the defining tropes of Zeuhl, and its absence here opens up the soundscape to allow the other instruments room to breathe. For all that, Le*Silo still manage to sound very heavy, but in an entirely different manner.

Melding a punky sensibility with jazz and Zeuhl structures, Le*Silo create a novel sonic collage where the rhythm is often established by fast, insistent, and more often than not damped chording from Miyako's piano, aided by drummer Michiaki Suganuma's propensity for playing around that established rhythm. Other traits include melodies played in unison by Miyako and guitarist Yoshiharu Izutsu, or counter melodies and rhythms from those two, with Michiaki's powerful drumming using the hi-hat and snare to great effect holding it all together.

Snow-capped land and Hypocondria in May are written by guitarist Yoshiharu, the former a brief outing on a reverberating Spanish guitar. Hypocondria in May features a nice change of pace with some lyrical and melodic guitar work to the fore, the theme woven through it giving the song a symphonic feel, in the manner of a rock chamber orchestra, building to a splendid climax.

The brief drum and percussion piece Guiggy's Frozen Tires and the following Ta.Ka.Ta.da-Zap are both penned by drummer Michiaki. The latter is an outing in fast syncopation, much in the style of the pianist's contributions.

"Kotatsu" must surely have another meaning other than a heated wooden frame upon which a futon or table top sits, the track A girl who is possessed by kotatsu itself being an initially elegant slow piano-led stroll that quickly ups a gear or two to become a menacing allegro in the Zeuhl style, with some damn fine howling guitar work taking the spotlight, the opening melody being reprised in a far more insistent fashion on the guitar near the end. Whisky and Soda frequently threatens to collapse inwardly in a drunken state, but pulls back reeling every time. Actually, a quite clever compositional device is used here, and it shows that this trio certainly have the chops.

The grand classical themes come to the fore on the typically strangely titled Overture of 'Let me take you to the public bath', where references to all manner of modern classicists rub shoulders with avant-blues licks from the guitar, Terje Rypdal fronting a Ligeti quartet perhaps. This tune is the pick of the bunch for me.

The album ends with Hevika Shot. Is that a drink? Whatever, it's a punky little number, full of vituperative energy and tight-knit ensemble playing with Miyako giving her best orgasmic primal screaming. It might frighten the neighbours, but it's a joyously untrammelled racket, and sometimes that's just what the doctor ordered.

Obviously an album for the more adventurous listener, Le*Silo with Kesamino have made the noise they want to, regardless of any commercial considerations, and good luck to them!

Band website - although years out of date, includes worldwide links to places where you might be able to buy the current album - sorry I can't be more helpful!