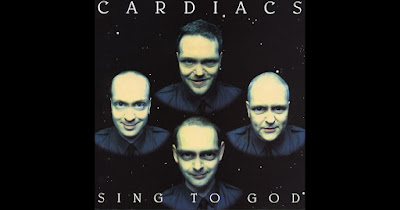 There are quite a few bands around that might be described as "Marmite" - note for non-Brits, it means you love them or can't stand them, the usual reaction to the tangy yeast-extract paste of the same name. Some who don't know what they're missing would describe VdGG and even the mighty Crim thus. For me it's Rush and Dweem Thweeter...I'd rather skick pins in my ears. Anyway, another "Marmite" are Cardiacs. For years I've tried to like them and failed. It's not that I can't stand them, it's simply that their impenetrably dense sound has never let me in despite my past attempts at meekly knocking on the door, rising to vainly attempting to pick the lock, and finally a futile try at simply kicking the bleedin' door in.

That was until a week or so ago, when I got hold of a copy of their magnum opus Sing To God. You see, I like to keep plugging away at bands I don't understand. The penny has dropped!

Sing To God is, as I'm sure all you "in the know" will agree, a work of genius. Just listen to this and tell me you prefer some dull prog band, and...well, I'll just sigh at your lack of imagination.

Have no fear, this will not be turning into a review, as everything that can possibly be said about this album has already been committed to print and to the ether, from the delirious fawnication of the supplicants (hmmm...good album title, there!) all the way down to raging negativity in words of less than one syllable, but I will say that the guitar solo on Fiery Gun Hand is either a work of undiluted genius, or maybe just a glorious mistake.

If like me you consider that judging by your otherwise eclectic and skewed musical tastes you should feel at home in Cardiacsworld but don't, just keep playing this fabulous mess of an album where chaos and order are one and the same, until you are hit by that Eureka Moment. You won't look back...
at April 08, 2016