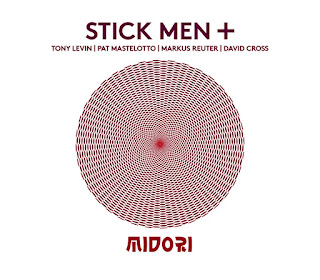 This brief missive is a to make you aware of a rather fab double live album by those masterful purveyors of Crim, and of course their own classy compositions and improvs, the mighty Stick Men. Midori is a document of one of four shows the band did in Japan in April 2015, previously only available in that country, but now out as a CD limited edition of 1000 on MoonJune Records.

The "+" added to group name is none other than David Cross, who seems to be in the midst of something of a renaissance at the moment, much to our delight. David adds his violin textures to interpetations of the timeless Starless theme, and makes other contributions to what is in effect a ProjeKct, in all but name.

Stick Men are also rightly reknowned for their imrovs, something lacking to any great degree other than the percussive interludes provided by the current line-up of the parent band, and there are some great examples here. Not forgetting the band's own compositions, which carry on the ethos of the Stick-based line ups of latter day Crim, the two strands weaving together seamlessly.

This double CD will also be available at the band's gigs, and next month the group embark on a lengthy tour of North America. My heart lit up when I saw the name "Northampton" in the gig list, but sadly it's the MA version, not the original. Ho-hum, we'll just have to wait for a UK appearance, I suppose. In the meantime, all of us this side of the Pond can content ourselves with this fabulous document of what must have been two stunning performances out there in the Land of the Rising Sun.