So, did I want to see my current favourite band at possibly the best venue in the country - a no-brainer. The tickets were acquired months ago by Phil W, and he, Phill H and moi trained it down to London full of anticipation. Phill H made it through the chronic back pain barrier to go, and he was rather glad he did. Coming at the end of a 13 month trek around the world, in promotion of their second breakthrough album The Incident, this gig came about in part I'm sure, because Steven Wilson's big buddy Mikael Akerfeldt with his band, Swedish prog metallers Opeth, had played at the same venue earlier in the year.

A rather convoluted trip from Tottenham Court Road tube station to the venue, due to signal failure problems on two different tube lines meant we took our seats in the circle just as the band were taking the stage. The Royal Albert Hall (about a mile west from Harrods, or at the southern end of Hyde Park from a tourist perspective) was built 130 years ago with a design based on Roman ampitheatres. Wherever you are sat the view is perfect, and it remains the best venue both acoustically and aesthetically in the country in my humble opinion. My only slight grouch is the usual lack of legroom, but I am 6' 2", so I'm used to it.

Postings on the band's own Facebook page had indicated that the first set would be a final complete run through of The Incident followed by a greatest hits set. That turned out to be just a teaser, as what actually transpired far exceeded our expectations. Having already seen The Incident played in its entirety last year, and still being nostalgic for their earlier more space-rock inclined sound, the way the gig turned out couldn't have been better.

So it was quite a surprise that the first set of the evening was a low key semi-acoustic affair with the four band members plus long time additional live guitarist John Wesley stage front. Steven Wilson was playing an acoustic guitar, John Wesley a semi acoustic, Richard Barbieri on electric piano, Gavin Harrison on a "Ringo" style stripped down drum kit, and the small but perfectly formed bass player Colin Edwin was dwarfed by his double bass.

﻿
﻿SW's deadpan sense of humour was aired when he introduced the final song in this set as "the closest to heavy metal we've ever got" and the band launched into a sort of street jazz version of Futile. I thought Stranger By The Minute and Pure Narcotic worked particularly well in this setting. A surprising but satisfying beginning to a three hour marathon.

After a very short break while the front of stage equipment was removed the band returned and launched straight into the rarely performed full length version of Even Less, minus John Wesley. As SW explained later they wanted to play all the older material as a four piece as it had originally been written. A stunning start! So much for The Incident being played in full. In fact we had to wait until six songs in before the first song from that album was aired, and it was the last track I Drive The Hearse, in typical perverse fashion. Immediately prior to that was a simply stunning version of my all time favourite Porcupine Tree track The Sky Moves Sideways, which I hadn't heard them play since 1995. At the end of that song the crowd gave the band a standing ovation, even the younger more metal oriented fans. SW said he felt a bit weird as when that track was new he was playing it to crowds of "a hundred" (I was one) and here they were playing it to nigh on four thousand people. After Bonnie The Cat from the bonus tracks cd of The Incident the band took another short break. We remarked on how the whole band were on top form, and clearly enjoying the experience of having "made it" and rightly so. Porcupine Tree are probably the only band I've followed live from the humblest of beginnings to the top division of the rock elite, and it's just so good to see a band you've always believed in getting their just desserts.


﻿
﻿
﻿﻿
﻿﻿We predicted that at some point the crushing riff of Occam's Razor would grace our ears, and sure enough the third set started with this followed by Blind House - two of my three favourite moments from The Incident. They then played the following tracks on The Incident up to Drawing The Line. Me and Phill H regard The Incident as a part return to form after the awfully disjointed Fear Of A Blank Planet. Strange that FOABP was the album that broke them worldwide, but maybe telling that only two of its tracks were played tonight. After Drawing The Line the band surprised everybody by taking a left turn with a sublime version of Tinto Brass, then SW retrieves his acoustic for the wonderful Time Flies, the stadium anthem in the band's canon that has replaced Even Less as the high point of their gigs. Next up are the two songs from FAOBP separated by Up The Downstair, the oldest track (along with Small Fish in the acoustic set from the same album) they would play tonight. Then, standing ovations all round as the band take their bows. The encore ended with Trains; a song that has become the end of gig crowd singalong.

A truly fabulous gig from a brilliant band! 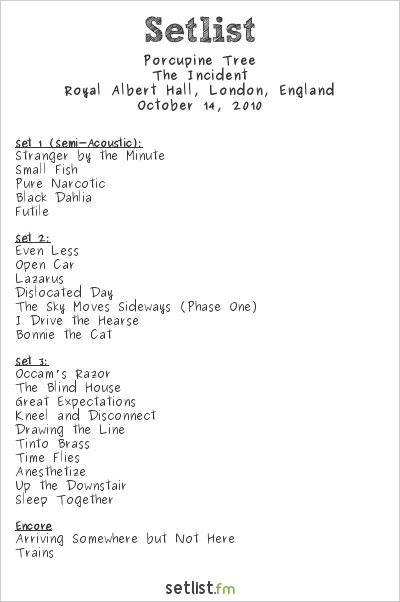 Pictures used with permission
at October 15, 2010