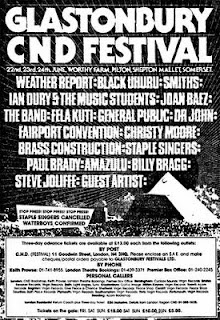 Around 175000 punters shelled out £195 per ticket at last weekend's Glastonbury Festival. That's a turnover of over £34 million, a sum and a ticket price that would have been unimaginable, even with the helping hand of the sumptuous amounts of psychotropic drugs available at the 1984 festival, the first of the three I've been to. Back then the ticket price according to this poster was a handsome £13, and the crowd a far more tolerable 50000 or so.

If you had told prospective punters back in '84 that the bill would be topped by a band several years past their prime, a personality free pop diva, and a band that wouldn't know how to rock if they were mainlining amphetamines washed down with Jack Daniels, the whole thing would, in the words of Keith Moon, have "gone down like a lead Zeppelin". Oh, and if you were to tell that '84 crowd that Mrs Thatcher's constituency agent thought it was literally and metaphorically "safe" enough for him to attend there may well have been a riot (they were quite fashionable in her day you know).

That's not to say that had I gone this year that I would not have found something to keep me entertained, as the bill is simply vast. I suppose Glasto has become a victim of its own success, but the fact that it is now seen as a part of the Hooray Henrys' (and Henriettas') summer season along with Henley, Wimbledon, Ascot etc, is enough to put me off, let alone the inflated ticket price, over-zealous security and the sheer overwhelming size of the thing. 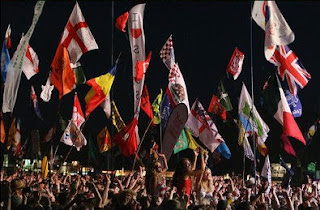 And another thing, those bleedin' flags. If I had shelled out nigh on £200 to see a few bands in a field, I would be more than a bit pissed off to have my view of Bonio & co obscured by a load of totem waving numpties.


Me and the missus were away for a weekend of R&R (rest & recuperation, not rock'n'roll) and I watched a bit of U2's frankly tame set in the B&B on Friday night. His Bononess getting the crowd to sing along to Blake's Jerusalem was a highlight. Was it me or was Bono dreadfully out of tune while singing England's unofficial anthem? If so, as an Irishman, I hope it was intentionally ironic, but knowing how po-faced he is, it probably wasn't!

During U2's set it had been the intention of Art Uncut (an offshoot of protest group UK Uncut) to unfurl a 20ft inflatable banner reading "U Pay Tax 2*", in protest at U2 Ltd moving its operations away from Ireland at a time of that country's greatest need of their no doubt significant tax revenue. Their new base is the Netherlands where apparently there is hardly any tax on music royalties. Should keep Paul Hewson in ludicrous shades and David Evans in bald patch hiding headgear for a few years then, so it must be ok. According to Sunday's Observer newspaper they were prevented from doing this by a team of beefy security types using somewhat over the top strong arm tactics, given the nature of the protest and the protestors. I'm afraid that this is yet another sign of the times. Glastonbury Festival used to be the expression of "us against them", a place were the laws of Britain applied but in a far more relaxed manner, but it has now firmly become the "them" it used to protest against.

The UK festival circuit has grown exponentially over the last decade, and there are now over 70 of them to chose from! At the beginning of September I'm off to The Endoftheroadfesval in deepest Wiltshire (so deep it's just about in Dorset!). This will be the first three day festival I've been to since Glastonbury 1995. Expect a report! Now, where did I put those wellies?.....