After a leisurely afternoon hunting down CD bargains and our usual pre-gig Chinese meal in Camden, Phil W and I made our way uptown to the venue, located in deepest Highbury, or Land of The Arse as some would have it (sorry, another football reference!).

The Garage is an all standing venue, holding about 700 when full, and I'd hazard a guess that tonight's crowd was somewhere between 350 and 400, so everyone had ample room to nod vigorously and jig from foot to foot, or in the case of the girl next to me, drink a lot and occasionally flail her arms about like a dysfunctional windmill.

At 8pm, Mikael and Thomas enter from stage right as we look, Mikael taking up his position over on the far side of the compact but not restrictive stage and Thomas installing himself behind his keyboards. They gently glide into Monument and are joined by the rest of the band bar Jan-Henrik and we are off into what will be a musical journey of over two hours, collectively celebrating splendid isolation, if such a thing is possible. As Monument ends singer Jan-Henrik enters to rousing cheers and the band launch into the anthemic Hell Freezes Over, here presented as one piece of music, as it was originally recorded. 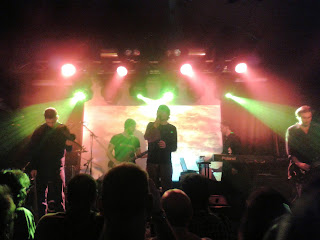 When not flailing about, the young lady previously mentioned together with her boyfriend turned out to be the token couple who insist on yakking away to each other during the quieter moments and between songs. I've never understood why anyone would want to go to a gig to have a conversation, although if it's...ahem...chemically aided then perhaps incessant natter is inevitable. The fact they were talking in their native Norwegian tongue made it slightly less annoying as you were not privy to the minutae of their inanities. Actually, they weren't that bad, and as the drink took hold, no doubt taking advantage of UK prices for booze I'd guess being considerably less than in Norway, they made less and less noise until by the end their efforts were mostly concentrated on holding each other up and hollering their approval at the end of each song, bless 'em. 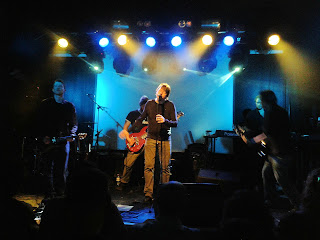 Back to the music...the setlist took in songs from a large chunk of the back catalogue, and after the initial selection from the sublime March Of Ghosts album Jan-Henrik told us with a smile and more than once that it was on sale at the merch stall just in case we hadn't already got it, which judging by the kind of audience that goes to these kind of gigs would be somewhat unlikely.

As a late-comer to this splendid band, anything prior to the Missa Atropos album is unknown territory to me, and I can safely say that all the earlier songs are well worth a listen and show the group's stately progress to the vast cinematic vistas of March Of Ghosts. After a selection from Missa Atropos and The Walk Parts I & II, we go back to March Of Ghosts for a trio of songs culminating in what for me is the album highlight, the atramentous mirror that is Black Lily, the kind of song that could only be written in a land that spends a fair proportion of the year in a state of permanent night.

Thomas on his keyboards, the trailing leg of the "R" of Roland painted out to reveal a Poland piano (arf) and Jon-Arne on guitar create the deep soundscapes for Mikael to embellish on violin, mandolin, and occasional second guitar. Holding this down is the rock solid rhythm section of Lars on the drums and Viking warrior Kristian on his mighty bass, a thing that could anchor a deep sea trawler such was its strength.

Indeed, the selection of tracks from the Night album had a distinct Anekdoten feel to them in places, so heavy was the rhythm. Jan-Henrik then teased us with the possible prospect of a reissued version of Night with extra tracks and live renditions. Well, I'll get it if it happens, that's for sure. Jan-Henrik, whose impish sense of humour shone through, completely at odds with the doomy introspective nature of his lyrics, also informed us that this whole tour is being recorded. If they made each show available as a download, I'm sure it would bring in a healthy profit - how about it guys?

The set ends with a triumphant Winter Is Never from Tick Tock but you know there's more to come and the encore serves up Splendid Isolation and, no doubt a surprise for the long time fans, the title track from their first album Bravo, which reveals a far more more rootsy sound that intrigues this newbie no end, Mikael's violin to the fore.

An uplifting and truly wonderful gig, which no doubt will be in my Best Of for 2012 along with March Of Ghosts. Come back soon guys!

Setlist:
Monument
Hell Freezes Over I to IV
The Walk, Parts I & II
Mass for Atropos II
Defense Mechanism
Vera
What Did I Do?
Golem
Black Lily
Dream of Stone
Chequered Light Buildings
Upside Down
Winter Is Never
Encore:
Splendid Isolation
Bravo
at March 31, 2012