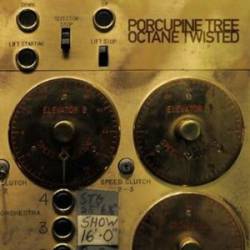 It's fanboy time! But this time with a sigh, as right now Octane Twisted seems to be a logical conclusion to the career of Steven Wilson's long running mainstream prog rock band. You get the feeling that the music he's creating now is what he really wants to do, and continuing Porcupine Tree now that they have found a higher level of success could only result in artistic compromise, as the newer fans demand Fear Of A Blank Planet Part 2 (gawd forbid) or Another Incident (preferable, but it ain't Signify or The Sky Moves Sideways, is it?). There, told you it was fanboy time.

Back in October 2010 as we sat in the wonderful venue that is London's Royal Albert Hall, it seemed only natural that the pinnacle gig of Porcupine Tree's lengthy existence should have been recorded, and now, two years later we are treated to but three songs from that special performance on this album. According to Steven he felt that the performance back at the RAH was not that good, and so is only releasing what he feels were the best bits. You see, that's what makes Steven Wilson an artist and not an entertainer. Bands that release everything they do, especially live albums, take note; although to be fair I suppose you'd have to be in a financially secure position to take such a praiseworthy but lofty decision.

The main bulk of the 2 CDs is a gig recorded in Chicago's The Riviera on 30th April 2010 on The Incident tour, and so we get a full rendering of that album plus a few corking highlights from years gone by. Some accuse Steven of a "cold" production, and that this album is too quiet, but they forget that he eschews the awful modern technique of recording everything louder than everything else, resulting in audible digital distortion, that is if you play your music on what is now becoming an increasingly unfashionable "proper hi-fi" rather than an iPod or worse, a mobile phone (Why???). It's odd that despite the ever advancing technologies involved in audio reproduction, yer average consumer is actually regressing back to a time of transistor radios under the bedcovers, metaphorically at least.

The best things about The Incident are THAT recurrent riff and Time Flies, probably the best song Pink Floyd never wrote. The stylistic homage is deliberate by the way, and very much a one-off, so the regressive rock element is thankfully kept to a minimum, and as a single song it works very well indeed. The performance is top notch, and the crowd obviously love it, and now with the hindsight of Steven's current activities and his less than enthusiastic pronouncements on the future of the band, The Incident could well be the last Porcupine Tree album. It is difficult to imagine where the band can go from here, and if we've had our lot, then so be it. Onwards and upwards as they say, and thanks for the music.

The three tracks from the RAH on Octane Twisted that end the second CD are Even Less, a rare outing for the long version, which opened the main set back then. A slightly nervous performance, understandably perhaps, but epic nonetheless. Better is the following Dislocated Day from my favourite album by the Porkie's, 1995's The Sky Moves Sideways, with its Eastern-tinged motif, and some splendid guitar work from Steven over Gavin's faultless timekeeping. Nice! Ending proceedings is an equally fab Arriving Somewhere But Not Here, from what for me was their last truly great album, 2005's Deadwing. A slight return to the space-rock vibe of old, this is a lovely atmospheric rendering of a great song that soars away into the stratosphere, and who knows, perhaps much like the band, never to return?

Tracklist:
CD1
The Incident:
1. Occam's Razor
2. The Blind House
3. Great Expectations
4. Kneel And Disconnect
5. Drawing The Line
6. The Incident
7. Your Unpleasant Family
8. The Yellow Windows Of The Evening Train
9. Time Flies
10. Degree Zero Of Liberty
11. Octane Twisted
12. The Seance
13. Circle Of Manias
14. I Drive The Hearse