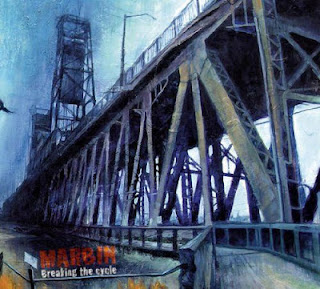 Breaking The Cycle was the second album released by Marbin, back in 2011. This fine band take their name from two young Israelis; guitarist Dani Rabin and saxophonist Danny Markovitch, ably assisted by Americans Paul Wertico (drums) and Steve Rodby (bass), both multiple Grammy Award winners with the Pat Metheny Group; not to mention a few distinguished guests (see line up list below).

Back in 2007 the duo famously interrupted a family dinner at Paul Wertico's home by turning up unexpectedly - but presumably not uninvited! The two Dans soon put down their musical roots in their adopted country, and in 2009 as well as releasing their self-titled debut album, Wertico gave them starring roles on his lauded improvised album Impressions Of A City. Since then a seemingly endless list of gigs has established the band as one of the hardest working outfits of any genre, and their road-honed experience shines through on this album. The fact that two veterans of the jazz-rock scene such as Wertico and Rodby were more than willing to hook up with the young duo for this album speaks volumes about the Israelis' musicianship, which, listening to this expansive album sounds like it's coming from players of twice their short experience.

The advantage of being young is that you are not hidebound by expectations, and so the pair lead the band through many styles including the straight ahead but energetic fusion of opener Loopy, Paul's rolling drum rhythms pulling the thing along in a joyous fashion. The piece also features a soaring solo from Dani and a short and to-the-point solo from Paul. We also get Tom Waits 12-bar scuzz-jazz (the marvellous and suitably titled Bar Stomp featuring some great hip-grinding guitar from Dani), Euro-jazz waltzes, melancholic wordless lullabies, expansive big sky sax ballads, folk and world music influences, and ending with the cinematic campfire balladry of closer Winds Of Grace, which features the plaintive lyrics and singing of Daniel White, bookended with an achingly lovely solo from Danny.

Featuring throughout is well respected percussionist Jamey Haddad (a member of Paul Simon's band), and he is another indication of the pulling power of the duo's musicality. With its superb band interplay and the wide open vistas of the arrangements Breaking The Cycle goes way beyond fusion and is simply good music with a human heart. Lovely!