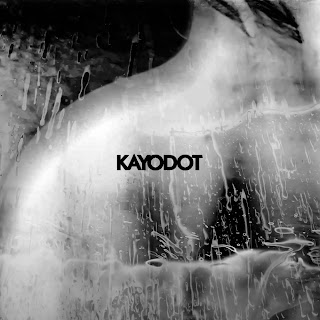 In an event of near synchronicity it falls to me to review Hubardo almost a year on from vainly attempting to dissemble Scott Walker's Bish Bosch. That both Walker's and Kayo Dot's atramentous works are being dissected at the gloomiest and darkest times of the year is more than appropriate.

Opeth's Mikael Åkerfeldt apparently wanted their album Watershed to be a heavy metal version of Scott Walker's The Drift, a work of deliberate literary obfuscation and non-musical mayhem. According to Åkerfeldt "it proved to be impossible simply because his [Scott's] head is sicker than mine and I also love melodies and dynamics." Well, although Kayo Dot's Hubardo does contain melody, sometimes but not always buried beneath waves of furious instrumentation, and certainly is frighteningly dynamic, in the most extreme sense of the word, if there ever was a band that could put Mr Engel's works through an avant-metal mincer, it is Toby Driver's band of feisty brigands.

If you haven't already guessed, if you listen to music purely for entertainment, then there is little point in reading any further, although this dark noise sure entertains me!

Formed ten years ago by multi-instrumentalist Toby Driver after the collapse of his previous band maudlin of the Well, Kayo Dot instantly made a name for themselves in avant musical circles by having their debut waxing Choirs Of The Eye released on no less a label than John Zorn's Tzadik Records. The group have not looked back since. Hubardo is their seventh album in a career that has been wildly adventurous and as uncompromisingly strange as it has been wilfully uncommercial.

With a line up in constant flux, the only other member apart from Driver on this album who appeared on Choirs... being violin player Mia Matsumiya, the band have gone through several changes in style. With a wide range of instrumentation the band shift from ancient death-metal to soul-shredding anti-balladry, industrial soundscapes, incorporating classical music structures, jazz timings, post-rock stylings, and no doubt, the kitchen sink, all of which renders Kayo Dot nigh on impossible to pin down, thank your deity of choice! The constant through all of this has been Driver's never ending quest to find new paths of musical expression, his compositional traits rendering each album recognisable as coming from a certain place, and at the same time sounding utterly different from one another.

Never one to shy away from a surprise, an example being the delightfully atmospheric and quite odd The First Matter (Saturn In The Guise Of Sadness), coming as it does after the first five tracks of unnerving full-on intensity. First Matter starts from a calm and eerie perspective reminiscent of Faith-era Cure, and slowly builds in intensity to morph into an avant-ambient monster around a simple keyboard figure, growling low-end frequencies and subtle but thunderous percussion.

If we may go back to the start, "Hubardo" means "lamp" or "lantern" in the ancient magickal language of Enochian, and album opener The Black Stone shines dark light on the black mirror, squaring the circle in the form of a guest appearance by former maudlin of the Well screamer Jason Byron, who oh-so-slowly growls his way through a tale of Leviathan and "water enough for all", one stretched and gnarled syllable after another. The thing seems to last for an eternity, which was probably the point, and no doubt a wilfully strange choice with which to start the album, but not really my cup of tea to be honest.

You will probably know that I am no fan of growling, but this band somehow make me leave my prejudices at the door, as this music is far, far more than just death metal. In fact as I said earlier, there is no point in labelling Kayo Dot, they just are. I am not saying it is easy to get used to, oh no, but this music is more than worthy of a bit of suffering in its appreciation.

Charting the story of a meteor falling to Earth and its transformative effects on a lonely poet, the lyrics are epic storytelling in the grand sense, and would not have looked out of place had they been translated into modern English from newly discovered texts by Dante. Take this verse from Thief (see Bandcamp link above), as our disturbed hero brings home the rock, riven by guilt:

Dramatic stuff, I think you'll agree, screamed out with increasing ferocity to such an extent as to become almost unintelligible. I'll admit this is where the cookie monster gets a tad OTT for me, but wait; suddenly the poet appears, and a verse in the middle of the song, marooned like a becalmed boat in the eye of a storm is crooned in a voice not a million miles away from Scott's. The poet is lost in introspection, as his "art stares back at him, a fount of living inspiration", before being overtaken by the maelstrom again, over which the brass blows like its life depends on it. This is hard work, but well worth the effort.

Even deep within the pit of unearthly gloom of the first five tracks there are highly musical moments such as the flute section in Vision Adjustment, and the neo-classical arrangement buried in the nightmare vision of the Mars Volta-like Zlida Caosgi.

When Toby sings and the growls cease, and the band climb down from the machine gun turret of sonic mania, a uneasy calm descends. Some relief, not necessarily "light", is needed, and this is brought by the aforementioned First Matter..., and continues into The Second Operation, the ensemble morphing into a jazz orchestra, mournful brass and reeds dancing with the achingly sad violin, across the still smoking sonic landscape. The song slows to a crawl as Toby croons the increasingly bizarre tale, the choir-like backing vocals adding to the calm in the eye of the storm. If the darkside is ever beautiful, this is what it sounds like.

It was inevitable really, that the Floodgate would open and it did. The storm is back as our hero has let loose the flood that would be the end of all things, the saxes blowing in a corner of a demonic jazz club situated somewhere in the Seventh Ring.

The poet finds his dream and becomes the thing he wanted to be.
And He Built Him A Boat is a musical and lyrical redemption, another one of those otherworldly alt-ballads, and this time I could imagine Nick Cave singing it. Storms of Kevin Shields' guitars swirl around as counterpoint to the sheer longing of the vocal, a marvellous construct indeed.

Things get even more ethereal on Passing The River, the first half of this song being about as different in style from the album introduction of The Black Stone as it is possible to be. A lovely slice of post-rock balladry that Paul Buchanan would have been happy to have penned, the song makes its stately way downstream, until it is bludgeoned by some fearsome feedback and distortion riddled unaccompanied guitar work, eventually joined in disharmonious mischief by the rest of the band, howling like a collective banshee.

This 100 minutes of sonic defiance ends with the stunningly good 14 minutes of Wait Of The World, a weirdly dislocated prog-jazz-fusion workout by a group of lysergically enhanced Venusians that happened to catch King Crimson's Cat Food as it flew by on a radio wave, "entranced by the advent of oblivion". Sung, not growled, I hasten to add, and I consider they have saved the best for the end.

With Hubardo Kayo Dot have produced a masterwork for their tenth anniversary. The much used phrase "pushing the envelope" becomes irrelevant. This envelope has been burnt to ashes, the cinders are then used as tribal war paint by the group as they march off to destroy expectations and musical horizons. Hubardo is probably a sonic definition of the word progressive, in its most literal sense, and if you have a sense of adventure where music is concerned you NEED to buy this.

I wonder what Mr Driver listens to for fun?

Buy direct from the band HERE as well as from all the usual digital places.

Note: Owing to the ludicrous pricing structure of US Postal, whose "service" sees fit to charge $35 for shipping a $32 vinyl album from the USA to the UK, I have reviewed this from a purchased download, as Toby tells me CD production is uneconomic for the band, much as it may have been preferable to us Europeans with more sense than money. Therefore I have not seen the artwork in its full LP cover sized glory. If the pdf's are anything to go by, it is a nicely put together package. So, if you don't mind paying that rather inflated price, go for it, if it's still available.
at November 08, 2013