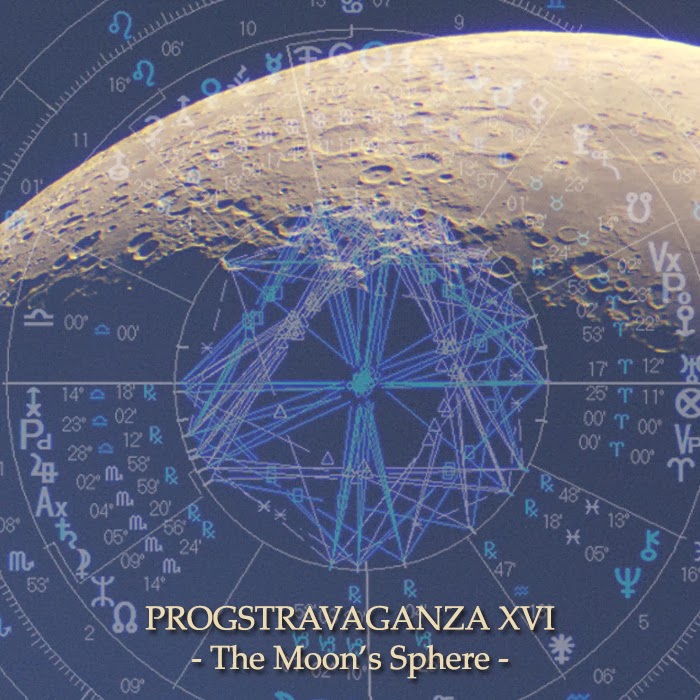 The long running Progstravaganza series of free-to-download samplers is the brainchild of my good friend, Prog Sphere's Nikola Savić, and aims to promote obscure bands that otherwise may get overlooked in this relentless internet age. These days it is so easy and relatively cheap to produce an album, especially if the eventually released format is the practically zero production cost digital only. There are hundreds if not thousands of them churned out every month, so it is no wonder that some gems get overlooked, hidden amongst more workaday fare. I'm being charitable with that last adjective, too.

With that in mind, over at DPRP I have joined with a couple of colleagues to form a triumvirate of scribes offering hopefully pithy summations of the dozens of tracks these compilations contain. There is an awful lot of chaff, but every now and then a gem is discovered. So, here we have Volume XVI, and this one is a bit different. While waiting for the next King Crimson to submit their mp3 files for the next volume, Nikola has teamed up with Leonardo Pavković over at Moonjune Records to put together a compilation of that fine label's wares. One independent spirit supporting another!

As I have reviewed a fair number of the albums from which these songs are taken, what follows is as much an unashamed promo with a dash of self-reference, as it is a review as such! So, here  goes...while I effuse about the undoubted delights contained within, why not put your feet up and hit play:

Apart from the first and last tracks, all the others have "info" links that lead to the individual tracks where you will find further links to the entire album from which the track was taken, all nestling up snugly on the Moonjune Bandcamp page.

1. Dewa Budjana feat. Vinnie Colaiuta & Jimmy Johnson - Duaji & Guraji (6:55)
While on his solo albums Indonesian fusion guitarist Dewa Budjana may possess a style that is a little too smooth for my tastes, the teaming up with two jazz rock giants on this track has definitely brought out a more urgent sound from the six stringer. A good start to the compilation from a soon to be released album, and one of four tracks on the compilation from albums to be released this year.

2. Machine Mass feat. Dave Liebman - Inti (6:25)
Having dropped the "Trio" from their name, due to departing reed player Jordi Grognard, Michel Delville's jazz rock band Machine Mass remain a three piece with the addition of former Miles Davis sideman Dave Liebman on saxophone. If this track is any indicator of the new album's direction, Dave's deployment of Miles-like spaces for Michel to burst into with flurries of scorching guitar notes will be a treat.

3. The Wrong Object - Detox Gruel (4:14)
The first track from one of the two best fusion albums of last year. Another one to feature Michel Delville's guitar talents. Simply MASSIVE!

4. Alex Maguire Sextet - John's Fragment (9:17)
Backed by four members of The Wrong Object, Alex Maguire lends his piano and synth to a loose-limbed jazz improv excursion, all played live. The album this was lifted from was released just over a year ago, and is well worth investigating.

5. Susan Clynes - Childhood Dreams (6:31)
Ah...now this an album I've been anticipating for some time. Since discovering Susan's warm unaffected tones on the aforementioned The Wrong Object album last year, in fact. It doesn't disappoint, morphing from almost scat jazz to mournful cello before heading off into Tori Amos territory. If this track is anything to go by, the album should be a belter, and I'll be heading to the Moonjune Bandcamp page right after I've scribbled this review for a preview.

6. Boris Savoldelli - Discordia (3:41)
Anything but discordant, this is an acapella joyful soul shouter, based on a theme not dissimilar to a vocal melody from leading Cantabrians Caravan. Nice!

8. Dewa Budjana - Dang Hyang Story (5:39)
This track is taken from Dewa's second solo album, reviewed by moi over at DPRP.

9. Ligro - Bilker 3 (10:55)
Another of Leo's discoveries while on his travels in Indonesia, mercurial plank spanker Agam Hamza fronts this powerful trio of hard rockin' gunslingers. More scribbles at DPRP on this one. This particular track is a somewhat atypical slab of otherworldy cosmic drift.

10. Machine Mass Trio - Khajurao (5:22)
Michel Delville's back again, this time with the "Trio" restored. This is a track full of Arabian mystery plucked from their scorching 2011 album, As Real As Thinking.

11. Marbin - Burning Match (5:10)
Massive, anthemic, cinematic, and just about any other large adjective you can shake a superlative at, what makes this stadium-sized jazz-rock instrumental all the more remarkable is the very young age of the two Israelis at its heart. Lovely.

12. Slivovitz - Vascello (6:04)
A delightful combination of multi-faceted instrumentation culminating in what can only be described as Euro-café-jazz-fusion, that, as the PR blurb has it, "(contains) more richness of detail here than on any ten albums by the latest vaunted ‘neo-prog’ bands". 'Nuff said.

14. Soft Machine Legacy - Fallout (6:59)
From the album that in my 'umble opinings shared the title of Best Fusion Album of 2013 with The Wrong Object's After The Exhibition, the vastly experienced line up of Etheridge/Marshall/Babbington/Travis improvise away to their heart's content on this little beauty.

15. Allan Holdsworth - Eeny Meeny (4:48)
And so we reach the halfway point of this lengthy trawl through Moonjune's back catalogue. This is a track from the iconic yorkshire guitarist's FLATTire album, remastered by the man himself and released last March. Allan's guitar plays second fiddle to his synthaxe-as-saxophone on this particular track, where the singular instrument issues forth a flurry of mellifluous melody in a very smooth style.

16. Marbin - Inner Monologue (4:35)
Once again belying their youth, an effortless romp down the back streets of Tel Aviv from Danny Markovitch (saxes) and Dani Rabin (guitars) and a stellar supporting cast, taken from the second album, 2013's Last Chapter of Dreaming.

17. Allan Holdsworth - Tullio (6:02)
Another one from the remastered album series, Hard Hat Area is one of the guitar player's personal favourites, on on Tullio he waxes lyrical in a style not a million miles from a laid back McLaughlin. Nice.

18. Arti & Mestieri - Mirafiori (5:53)
Cult Italian jazz-proggers heavily influenced by the iconic American fusion bands of the 70s, caught live on their 2005 tour of Japan. This track charges along like a race from a red light between Return To Forever and Jerry Goodman Mahavisnu. At 76 minutes long, the album First Live In Japan is epic, in every sense of the word.

19. Finisterre - Phaedra 13:51
Italian band recorded live in the USA at Progfest 97. Knowing American audience's preference for name bands, most of the audience will have been at the bar, but no doubt hearing snatches from King Crimson and Genesis will have drawn them back. This is the only thing on here you could describe as "prog" in the traditional sense, but mighty entertaining for all that.

20. Hugh Hopper & Yumi Hara Cawkwell (HUMI) - Awayuki (Light Snow) (5:50)
The ever-questing Hugh Hopper joins forces with Yumi for an avant exploration that goes to places you would never have imagined existed. Music for the head, definitely.

21. Mahogany Frog - Expo '67 (5:04)
Set the controls for the heart of Interlagos. Revved to the max swirling keyboard retro-future psychedelia of a very high calibre, from the album Senna. TURN IT UP!

22. Soft Machine Legacy - Back Room (9:41)
A live favourite from the modern fusion masters. Deep Down Funky!

24. Dusan Jevtovic - One on One (4:51)
Serbian guitarist with a song from his debut Am I Walking Wrong?, a fine new twist on psychedelic-blues-prog, as pioneered by the mighty Groundhogs. Another one to play at neighbour annoying levels!

25. I Know You Well Miss Clara - Conversation (8:02)
Another really good Indonesian guitar player, one Reza Ryan, here with his band on what was probably the best debut album of 2013. Jazz-fusion is often a genre where overbearing technical ability frequently results in airless recordings, and while this new band have ability in spades, they are also possessed of an emotional warmth that is all too rare in this sometimes arid genre.

26. simakDialog - As Far As It Can Be (Jaco) (8:07)
No Moonjune compilation would be complete without a contribution from Leo's first Indonesian guitar playing discovery, Riza Arshad, and his experienced bandmates in simakDialog. Tight as a nut and tantalising as a sweet chili sauce, this is what it's all about where forging new paths for fusion music is concerned. From their fifth studio album, The 6th Story.

27. Dialeto - Lydia in the Playground (5:20)
This time, we haed back West, way over the Pacific to Brazil where we find yet another trio, Dialeto and their album The Last Tribe, "a "take no prisoners" progressive rock steamroller" as the blurb puts it. Too right.

28. Allan Holdsworth - Tokyo Dreams (4:04)
If Allan Holdsworth is the sometimes stern father figure of modern jazz fusion, does that make John Etheridge its friendly uncle?! Anyway, this is a track from one my favourite Holdsworth albums, Road Games. All you need to know is that among the supporting cast are such names as Jack Bruce, Jeff Berlin and Chad Wackerman. Another case of "'nuff said"!

29. douBt - Jalal (7:16)
Michel Delville's final appearance on this compilation, this time as part of his original band douBt, from whom sprang Machine Mass Trio, originally as a side project. Rock Family Tree convolutions apart, I'm not going to tell you anything about this track, taken from the album Mercy, Pity, Peace & Love, other than to quote my own review (I did warn you it might get self-referential!)...

"I think I'll don my brand-new pair of butterfly rolling skates and dance to this little beauty again...."

30. Xavi Reija - John's Song (6:24)
We conclude with the only name I'd not come across before. Catalan drummer Xavi is here joined by Dusan Jevtovic on guitar and Bernat Hernandez on funky bass. The latter also contributes the low notes to Dusan's album (see track 24, above). A propulsive journey to far sonic boundaries, unfortunately there does not seem to be an album from Xavi, so we are left with this tantalising glimpse.
...

There very few labels these days whose output is a guarantee of quality, but Moonjune Records is up there with the best, no question. If, like me, you like your rock served with a healthy infusion of progressive exploration, garnished with the influence of jazz, then you probably need nearly all these albums!

If that is a daunting prospect, the very least you can do is download this compilation, all 201½ minutes of it, all for as little as you want to spend, right down to a big fat zero.
at February 02, 2014