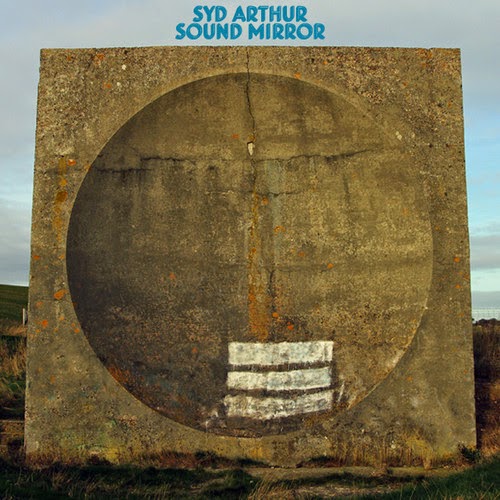 Ah...now I understand. Having criticised Syd Arthur's debut album On And On not for its songs, but for the seemingly "bouncing in the red" production, it now makes sense. There are much improved production values on Sound Mirror, no doubt down in no small part to Abbey Road Studios where the mastering took place, and Electric Lady studios in NYC where it was mixed. It is now obvious to me that the band deliberately go for a fuzzy and murky production thereby enhancing their soul-deep psychedelic melange of sound. Add in the benefit of the ghosts of Hendrix and The Beatles floating around the studios, and the sound on this record is still the audio equivalent of looking through the bottom of the glass, but in a good way. Rather than the sometimes gratingly distorted noise that lurked in the grooves of On And On, the auditory experience this time round is akin to immersing oneself in a warm volcanic spa. Much as that is the case, I still feel the Syds would benefit from a cleaner production, as I consider that there is an overpopulation of sound within a narrow frequency band, which leads to individual musical voices getting lost in the sonic fog. The songs would gain considerably from a more defined separation of the instrumentation, although I appreciate that is a purely personal preference.

And so we arrive at Sound Mirror, Syd Arthur's second album. If you are the slightest bit interested in the world of prog, the name Syd Arthur must have crossed your radar in recent months. A band in demand, not long returned from a support slot on the USA leg of the latest Yes tour, they can boast Paul Weller amongst their more well-known fans, and they are signed to the iconic Harvest label. All in all, this band are about as trendy as you can get in the wilfully unfashionable progwelt. Oh, and they're from Canterbury too, as if you didn't know, and I won't even mention a famous musical family connection in the band. With all that going for them you might surmise that Syd Arthur have been blessed with a guardian angel in these early years of their existence.

Luckily, the meat and drink of being a band, namely the humble song and its delivering has never been a problem for this merry bunch of Cantabrians. One can tell that even beneath the "faders set to 11" of the first album there lurked tunesmithery of a high quality, and here on Sound Mirror better justice is done to their writing and arranging abilities. In any event both those attributes have improved in leaps and bounds from On And On.

A lot of the groundwork for the album was laid over in Ireland, at drummer Fred Rother's parents' house. The swirling mists so common in that land and the attendant centuries-old Celtic mysticism seems to have seeped into these grooves, lending Sound Mirror a distant and magical feel that is often pulled back into focus by the concise songwriting.


The album is a mere 34 minutes long but feels like a complete entity, as albums used to back in the mists of time when spinning a new Harvest Records LP was a guarantee of esoteric quality. Uplifting songs like opener Garden Of Time and the following Hometown Blues rub shoulders with the whimsical ponderings of What's Your Secret. The occasionally pastoral air is vibrated by increasingly psychedelic offerings, epitomised by the exploratory journeys into space of Autograph and Singularity.


Liam Magill is not your typical rock singer. His voice is a delicate thing and is as close to a croon as you would care to be, this side of Tim Bowness, although it is utterly different from the breathy menace of the Norwich heartbreaker. The striking, but never strident individuality of Liam's dulcet tones is another thing that marks this band out as different.

Back to the songs, and All And Everything heads for overdrive overload, particularly from the bass guitar, but I would have preferred less murk for it is another of those effortless romps into art-rock territory that the Syds do so well, albeit somewhat clouded by the fuzz. Forevermore borrows its title from one half of the inspiration for the band's name, and has a quite lovely summery and jazzy vibe. There are flowers in this song's hair. Singularity sees a free-form wigout by Liam and Raven Bush, backed by Liam's brother Joel doing his best fuzzed-out Hugh Hopper impression.

I still have some issues with the band's self-production, which if it is anything like self-editing must be damned hard work, as inevitably one sometimes struggles to see the wood for the trees. However, Sound Mirror is a great little album, and well worth just over half an hour of anyone's time. "Give me a reason to stay" sings Liam on Hometown Blues, and there are ten examples on Sound Mirror to stick with this band for a while yet. How about getting a producer in next time guys?