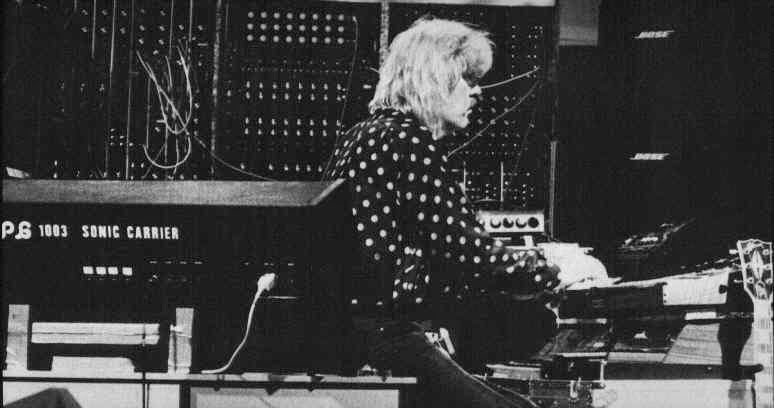 As you have probably heard by now Edgar Froese, founder member of Tangerine Dream passed away on 20th January 2015. Tangerine Dream were one of the most important bands in the history of what might loosely be termed "rock music", both for their fearless sonic vision, apparent from their very first album onwards, and for their pioneering use of the synthesiser. They have had more influence on the development of electronic ambient music than probably any other band, with the album Zeit often being credited with being the first "dark ambient" record.

Like most music fans of my generation, in the UK at least, we have Richard Branson's Virgin Records to thank for our introduction into this weird universe, courtesy of the Tang's breakthrough album Phaedra, a presence in the sixth form common room almost as ubiquitous as Dark Side Of The Moon or Selling England By The Pound.

A sizeable number of those of us who got into the deep-space grooves of that vast and eerie record ventured on to Virgin's double compilation of the Alpha Centauri and Atem albums and before long we were adrift in space! Phaedra was the band's fifth album, the two "As" numbers two and four. Sandwiched in between those two was the glorious sprawling double album Zeit. Last to be mentioned, but by no means least, was the early post-Syd Floyd-like Electronic Meditation, an album I only came to be aware of decades later in my short but manic record collecting phase. Edgar playing psychedelic guitar on Cold Smoke in a frantic manner comes as quite a shock when you've worked backwards from Phaedra I can tell you!

Leaving the atypical debut album aside, enjoyable though it is, the Tangs were much more than just spacey synthesiser music, as the instrumentation on those albums two to five will show, Featuring vibraphones, string quartets, piano, flute, zither as well as sundry keyboards and guitars, there is always something going on in the sonic spectrum to prevent the listener from drifting off, a trait of a lot of Tang-influenced ambient music it has to be said.

There are of course later albums of merit, although they changed tack completely after the 70s and did not produce much that floated my space junk, but to me those first five sum up what the band were all about.

Turn on and tune in to this little lot, tracks that show how the band developed through those first five groundbreaking records...

Genesis - Electronic Meditation (1970)
The first track from the first album shows the then youthful Germans at their most wilfully experimental.

Ultima Thule - non-album single (1971)
The band pay homage to their Floyd obsession with this enjoyable if somewhat dated wigout. Warning - this is a far louder recording that the previous vid!

Birth of Liquid Plejades - Zeit (1972)
The title track of the previous album hinted at it, but Zeit sees the full blooming of the Tangs' unique brand of spacerock. Featuring a cello quartet and Florian Fricke from fellow Kosmische explorers Popol Vuh on yet more synths, this is as mournful as it is simply majestic. It gets you right in the soul.

Fauni-Gena - Atem (1973)
John Peel's album of the year in 1973, it was Atem that brought the band to the notice of one Richard Branson. A more organic sound on this one, let's get introspective to the sound of avian spacerock, baby! Incidentally, the baby in the LP cover picture is Jerome Froese, who would play alongside his dad in the band many years later. The circle will be unbroken.

Email ThisBlogThis!Share to TwitterShare to FacebookShare to Pinterest
Labels: R.I.P.