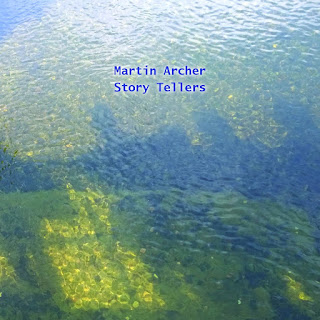 First off - cards on the table. Where jazz is concerned I am no more than a dilettante. I am familiar with the obvious jazz musicians who crossed over into rock in the mid to late 60s and kick started fusion, and the more well known names like Mingus and Coltrane, and of course with Miles Davis, whose musical genius extends far beyond the jazz base camp, a genre that underwent seismic shifts as a direct result of Miles' innovations on more than one occasion.

That said it has been a pleasure partaking of a crash course into Martin Archer's long held improvisational inspiration, the Association for the Advancement of Creative Musicians (AACM), a collective of Chicago based jazz musicians formed in 1965 to explore new ways and means of composition to counter the rise of pop and rock that back then was threatening the very existence of their musical raison d'etre. My whirlwind tour of the Windy City's finest concentrated specifically on the three musicians Martin lists in tribute in the cover notes to this fine double CD, namely pianist Muhal Richard Abrams, saxophonist Roscoe Mitchell, and trumpeter Wadada Leo Smith. Abrams' Young At Heart/Wise In Time is astonishing....must spend some more time in that universe when I have the time.

Martin has released numerous albums wearing different hats, among which are the explorer of the songform with Julie Tippetts, fabulous and massive Deutschrock improv with Orchestra of the Upper Atmosphere, and wayward avant electronica with Inclusion Principle, to name but three, but on Story Tellers he returns to his true home, that of composer, arranger and player of reed instruments in a semi-improvised jazz band setting. 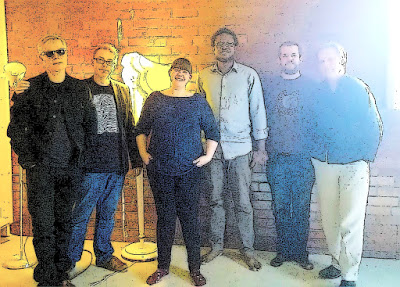 Story Tellers is played by a sextet, the double CD comprising six long suites, or "Books", each approximately 20 minutes long, and each with linking themes to create one long cycle. The six Books are divided into five or six Chapters, through which the common themes evolve. Within each Book, "each "Story Teller" has their own solo Chapter...and each of these individual themes are also combined in different pairs with additional textural material and improvisation models to form more Chapters...Some Books end with a Shaman Drone; others have an individual coda as a fifth Chapter." Martin describes all this in the cover notes as a "simple" idea! Well, he may say that, I couldn't possibly comment.

Improvisations on the common theme, rhythmic sections and duets link around a basic structure that gives free reign to all the individual players' not inconsiderable skills. With my knowledge of this area of jazz music being about as deep as the President Elect's intellect, I therefore confess that any insight I may be able to give is and can only be, impressionistic. Ah...that's a good word, this music transfers from the steam powered hi-fi's speakers to this listener as an aural impressionist painting, a place where the ground is constantly shifting and nothing is quite as solid as it may seem.

I particularly dig the odd staccato rhythms of the Like It Is (and Was or Will Be) sections, as it flirts with conventional tuneage in an impish fashion. Another highlight is the minimalist conversation between flute, sax, and later numerous percussion items on the band version of The Barbarian, that ramps up the intensity during a clattering and fraught Shaman Song #2, a piece that ends in a calm medative state, many miles from its cacophonous beginnings. Much like the album as a whole, where you end is not where you begin, but a river runs through it.

The twists and turns continue into Book 4, as Anton Hunter's abstract guitar pushes the raft away from the shore, soon to be joined by tribal drums and sonorous reeds for Like It Was as the ensemble revisit the by now familiar theme, from yet another angle. The transition from the intensive sax parping of Story Tellers #5 to the bass rumble of Like It Will Be moves the listener from one small room to a wide open space of avant-rock expansiveness. You may guess that the Like It... chapters are my personal sonic centres on this album, as they connect most easily to my rockist sensibilities. If there are any jazzers reading this, I make no apologies! Anton Hunter's treated guitar prowls, grumbles, screeches and snarls while drummer and percussionist Peter Fairclough, who may well be the true star of this ensemble, lays down a devilishly blue shuffle that leads proceedings from A to B via deep caverns and dirty ginnels, before taking his own brief solo spotlight with some deft runs and fills on The Wayfarer's Bastard. Just what the doctor ordered!

In the final book, the thrum of the band version of The Wounded Healer rides tumultuous waves before a rare gap in proceedings into Anton Hunter's solo spot, which commences in a considered manner, tension rising incrementally on echoed single notes. Then The Casuist returns to the simple theme, pursued by demons cackling away on percussion and guitar, all the while the sax admirably sticking to its guns. A suitable way to end before the final dedication, this time to Roscoe Mitchell, Martin Archer blowing and bowing out on a smoky blues.

This has been a fascinating trip, and for me an education, and music does not get much better than that.