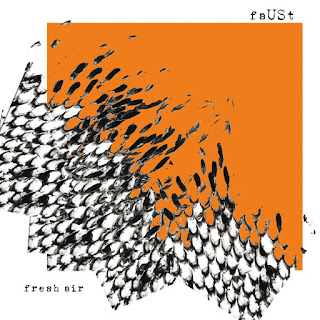 "All we need...is fresh air in our brain" declaims the propulsive opening title track to this driven and tribal album, recorded on a tour of the USA in 2016, and Faust...or is it faUSt..., the rhythmic engine room of Krautrock are back on my radar after an absence of some years.

Seems like I have some catching up to do, as true to their anarchic spirit, there appears to be two versions of the band currently in existence. The version we find here, spelling themselves faUSt, no doubt after their long American connection, are steered by bassist and singer Jean-Hervé Peron ("jhp.art-terrorist") and drummer Werner Diermaier ("Zappi"). They are the most active of the two versions, having released a handful of albums since 2009, and they tour fairly regularly.

Fresh Air kicks off with the mammoth title track, which for the first half of its length is a dreamy synth-led ambient wander through a Polish translation of part of a work by French poet, painter, musician and performance artist Joël Hubaut entitled Put Put Epidemik, essentially an increasingly surreal list of the desires of the protagonist. The female narrator declaims "Chciałbym", or "I would like" followed by increasingly surreal pronouncements such as "antennas and jaws", or "eyes on the floor of my mouth", to name but two. The full translation can be found HERE. Eventually the band join in and establish a primitive and relentless but nonetheless hypnotic motorik rhythm, with accompanying distorted guitars and declamations, this time in English, on where we need fresh air. All quite bizarre, and so utterly Faust...or is it faUSt. To borrow John Peel's famous description of The Fall, this band are "always different, always the same", and I wouldn't have it any other way.

Here is a fabulous live set, filmed last year, featuring the line up from most of this album...


Actually when you get down to it, there is quite a similarity with The Fall apparent in many places on this record, the disinterested vocals of Barbara Manning on Lights Flickr, the general anarchic and uncompromising air, the joy in repetition, the surreal and declamatory lyrics, it's all there. Mind you it is no secret that MES is a big Krautrock fan, especially of Can, and one suspects, Faust.

The meaty rhythmic heft of Zappi and jhp is to the fore on Le Poulie, where the pulse of Neu! is given extra energy by righteous anger and ancient synthesisers. The chugging sax on Chlorophyl ends in free jazz territory, continuing into the beginning of the fast, noisy, and feral Lights Flikr, which for me is the album highlight, as Barbara Manning treads a nervous high tension line, telling us...

This is organic, shamanic, lustful, repulsive and propulsive, turning into a strange tale of exploding heads and parts of corpses found in the washing up. Marvellous!

Returning to the sea from whence all life came, Fish is strangely primordial and a warning to end the album, the protagonist praising the sea. "The Sea, the Sea, she is eternal, she saw you when you were a baby", but "She does not mind all the corpses of the refugees...she does not care about our futile problems", all to a familiar yet creepy Faustian drone.

Uncompromising as ever, faUSt...or is it Faust...continue their unmapped path to who knows where, least of all themselves. The journey continues to be thoroughly engaging, and the band who made The Faust Tapes well over forty years ago, and one of my top five favourite records of all time, continue to surprise.

Line up:
All of this is approximate and gleaned from the live video above...
Jean-Hervé Peron (aka "jhp.art-terrorist") - Bass, guitars, vocals
Werner Diermaier (aka "Zappi") - Drums
Maxime Manac'h - Guitar, percussion