What did you get for Xmas in the way of music, then? These are my choice gifted shiny discs of the usurped pagan festival, narrated with my usual acerbic flare... 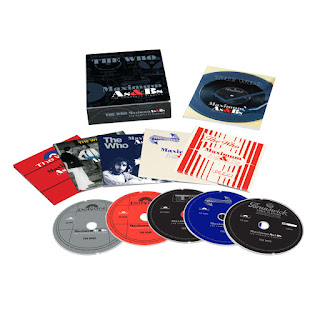 There really was something in the water in 1967, and Owsley Stanley probably put it there. Whatever it was, it made so many bands explode with creativity in a manner that was never anticipated, least of all by the bands themselves. One of those groups was The 'Oo, who up to that point had a knack for a catchy single, and in Pete Townshend they had a writer brimming with ideas, which combined with the potent chemistry of their line up made for an exciting proposition on Ready Steady Go. Like all bands from the early 60s, even The Beatles, the b-sides from their early years were more often than not filler rather than killer. Then in 1967 out of the blue came I Can See For Miles which witnessed Townshend's songwriting take a huge leap forward. Suddenly they were so much more than just a noisy pop band.

This nicely put together box set can be split into two, the first three and a bit CDs of five being mostly highly entertaining, the rest of the "play once and file" variety. Everything that comes before I Can See For Miles is a band scratching around looking for a road to travel, with occasional gems on the a-side hiding filler and  experiments at the mixing desk going rather awry on the b-sides. What the heck was going through Pete's mind while making the godawful mess that is Disguises?

I Can See For Miles arrives near the end of CD Two, and CD Three is where the main action is, starting with Pinball Wizard, which poffers the incongruous prospect of the pugilistic Roger Daltrey - what is it with musos called Roger and punching walls? - playing the delicate innocent abroad deaf dumb and blind kid, and ends with the perfunctory but nevertheless rocktastic Relay. It also contains my fave 'Oo single, The Seeker, along with four minutes of evidence in the form of Dogs Part Two that Townshend might be a great rhythm player and songwriter, but a lead plank spanker he ain't. Good to know that you don't need the endless racket of Live In Leeds, the world's most overrated live album, to tell you that!

The 'Oo's finest moment,  here in truncated single form is on the third CD too, and I defy you not to turn it up a notch or two when the opening riff of Won't Get Fooled Again crashes in. Another fave of mine is the rather underrated downhome rabblerouser with Jew's Harp that is Join Together, the by then somewhat dated hippy sentiment being at odds with the band's admirable aggressive stance notwithstanding. Predating Townshend's work with Ronnie Lane it has a "getting it together in the country" feel, with DM's on. Given their stance and their connection with their audience, The 'Oo were probably the first punk band when all's said and done. Join Together's b-side, a rather yawnsome Daltrey chest beating and Townshend guitar workout symptomatic of their live sound at the time, is the only filler on the third CD.

By the fourth CD, the law of diminishing returns has kicked in, and really, it's all over by track seven (of 16), the somewhat wheezing Who Are You, which rather pointedly, coming out as it did in the year of punk showed how the spiritual fathers of the UK safety pin generation had run out of steam. Also of course, soon after that single the band lost a cornerstone with the sad death of Moon The Loon. Maybe they should have had the dignity and sense to call it a day then, in a similar fashion to Led Zeppelin a couple of years later.

The rest of the fourth and the fifth CD are really fans only affairs containing as they do numerous live tracks and some non-essential studio work by later line ups that have little of the original band's energy or direction.

Maximum As&Bs is not bad at all, but I wouldn't have bought it. This is what Xmas is for, after all!

We are constantly told The Beatles had a lot do with or even caused the seismic shift in popular music that took place in 1967, so it must be true. Personally, I think that the likes of Hendrix, and to a lesser extent Cream had just as much to do with it, although to be fair it could be argued that the Scousers kick-started the process with the previous year's Revolver. As far as Sgt. Pepper goes, obviously there is nothing left to be said about what is probably the most well-known collection of tracks ever committed to tape, so I don't really need to add anything, other than the fact that Giles Martin's stereo remix is truly marvellous, and knocks his dad's team's original afterthought of a stereo mix into a cocked dustbin.

The second CD contains wonderful remixes of the contemporaneous Penny/Lane/Strawberry Fields Forever single, annoyingly hidden away as tracks 16 and 18, so you have to fiddle around with the remote to play them in sequence. I wonder how many folk are going to burn a CD or store a playlist with the single either before or after the main album, and never play the rest of CD 2 again, which is merely a collection of inessential play once outtakes?

This one is courtesy of my trusty gig-going companion Phil W, who knows my odd taste pretty well. Therefore, I sensibly waited until my better half was out of the house before entertaining the cats with its fulsome racket, recorded in 1972 at the venerable Paris L'Olympia.

Actually, Mike Ratledge's more edgy and teeth-rattling fuzz-driven Lowery organ work is largely absent, or buried in the mix, often replaced instead by his, or subservient to Elton Dean's electric pianos, so I need not have worried. This makes the sound far more palatable, even on the the band's most outre work Facelift.

The album features everything but Moon In June from Third, all but one track of Fifth,  and some great improv pieces. Dean's reeds are fabulous of course, and Marshall and Hopper are a rhythm section to die for, and all in all this is a fabulous live album.
at December 30, 2017