The Pineapple Thief - Someone Here Is Live

This is a great live album from a band that deserve success after a long time "paying their dues". For the princely sum of £8 (320 kbps mp3, or £10 for the FLAC version - see end of review for link) you can obtain nearly 2 hours of music recorded live with no overdubs from the band's European Tour in October 2010. A bargain!

Showcasing their Someone Here Is Missing album from earlier in the year, the album also includes many highlights mainly from the more recent part of their career. Some of the songs here are extended versions of the originals, and as such give one a good idea of the band's live dynamic.

Some nice wah guitar features in Tightly Wound, So We Row veers into space rock territory, the 14 and 1/2 minute Too Much To Lose is a lesson in building and releasing musical tension, 3000 Days has a great almost Zeppelin-like coda with some fine guitar thrashing from Bruce. Wake Up The Dead is the song that comes in for the dreaded Radiohead comparison in other reviews on sites like Prog Archives, but ignore that and take it on its own pulse-beat driving merits and it will have you jumping round the room. A great song to put on while getting ready to hit the town methinks...I was young once you know!

Unfairly compared elsewhere to Muse & Radiohead, The Pineapple Thief have over many years developed their own distinctive sound, and those who think otherwise are maybe blinded by their own prejudices. The only similarity to Muse and Radiohead is the sharing of a modern post rock sound, but The Pineapple Thief's songs stand on their own. This band lack the overblown pomposity of Muse, and they write more melodic material than Radiohead, a band that often fail to live up to their ambitions in my opinion.

A mighty fine post-rock tour de force, for someone unfamiliar with this band this is as good a place to start as any, and I highly recommend it. 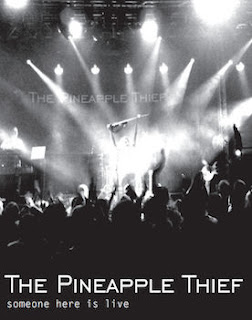