Let's be honest here, I would say around 90% of tonight's audience are here because of the Steven Wilson connection, and 5% are probably fans of support act The Pineapple Thief, who need no introduction from me, as you probably know! I'm probably being generous saying 5% are actually Blackfield fans first and foremost.

I find Blackfield the least compelling of all of Wilson's many side projects, as their first two albums come across as Porcupine Tree leftovers to these ears. Their latest offering, Welcome To My DNA, has been played a couple of times and has yet to make an impression beyond being more of the same.

The Pineapple Thief came on at around 7:45 and played a somewhat restrained set compared to the all-guns-blazing recent showcase gig in London. I can't see that they made many new fans on tonight's showing.

After a break of around half an hour, Blackfield enter stage right. First impression is that Wilson and main writer Aviv Geffen make a very odd pairing. Wilson with his well groomed slacker look, if that's not a contradiction in terms, replete with trademark bare feet, stands across from Geffen who is dolled up to the nines showbiz stylee, sequined jacket, shiny black patent leather shoes, hair gelled to the max. Geffen is huge in Israel, where his left wing credentials appeal to the disaffected youth of that strange country. A kind of Robbie Williams on downers, he discarded layers of clothing through the show and played the encore bare chested. You can't imagine Wilson doing that can you? His lyrical themes of love, peace, death and suicide might be how he came to Wilson's attention, as our Stevie has an ear for the doom and gloom, as we know! 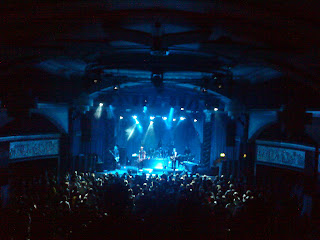 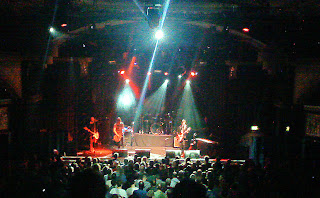 What about the music? You may well ask, as it never really gets beyond lukewarm apart from a couple of exceptions, in particular the encore Cloudy Now, which is the apogee of my and my companions' feelings on this band, in that I see Blackfield as Porcupine Tree lite and without many defining characteristics of their own. One thing that did catch my attention was the overbearing drummer who sat behind a big kit on an overly elevated drum riser and made AS MUCH NOISE AS POSSIBLE ALL THE TIME. Think of the ghastly Mel Gaynor out of Simple Minds way back in the 80s, who contributed to ruining a half decent band in my opinion, and you'd be about there. This guy could certainly do with a few "less is more" lessons.

My scribblings might give the impression that I did not enjoy the gig - not so, it was ok, but that's about it I'm afraid.
at April 07, 2011