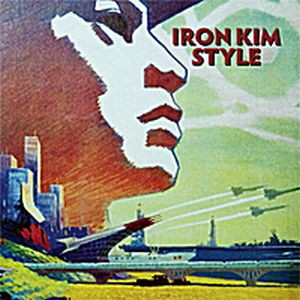 Listen to some of this fine album while reading on, here.
Never one to rest on his laurels, Seattle’s Denis Rea fresh from having released Moraine’s debut album Manifest Destiny in 2009 joined up with Ryan Berg in the latter's improv project Iron Kim Style in order to unleash the harder side of his frequently mesmerising guitar playing. This coruscating jazz-fusion ensemble recorded and released an hours worth of improvised densely heavy fusion in 2010 to local acclaim and to anyone outside of North West USA promptly seemed to disappear from whence they came, much to the loss of lovers of challenging music everywhere. Named after the martial arts style favoured by loony North Korean dictator Kim Jong-Il, the inner cover of Iron Kim Style's debut playfully proclaims "Your boxing has no power", and proceeds to show us exactly what that power sounds like.
Starting off with The Mean Streets Of Pyongyang, where a sinuous bass groove leads us into an example of free association ensemble playing of the highest order I can tell I’m in for a bit of a treat. Dennis’ guitar strikes some open tuned chords inviting the others to fill the spaces, and Bill Jones’ trumpet duly obliges. There are obvious comparisons to be made with the trumpet playing of Miles Davis but most trumpet players would take that as a compliment I’m sure. Jay Jaskot reprises the military beat and the open chords are back leading to some lurching reluctant ensemble playing – join in or face the wrath of Kim! The crowds fight back after a passage of melancholy world-weary guitar that leads to some incendiary soloing from Dennis. The proletariat will not be stomped down forever! A fine start to the record, painting a bleak picture of oppression, but infused with hope.
There are moments of strange avant weirdness introducing Gibberish Falter, sounding like a traffic jam in Hell broadcast over a short wave radio. Once another funky bass groove from Ryan Berg has nailed things down Bill’s exemplary trumpet playing reminds me of Chris Botti from Bruford Levin Upper Extremities’ wonderful Blue Nights live album. In fact there are a lot of connections between this and the B.L.U.E. sound, albeit that Iron Kim Style have a slightly harder edge. Forgive me if I have missed the contributions of the charmingly Dickensian sounding Thaddaeus Brophy on 12-string, but as a non-muso it’s not always obvious which guitar is which, although I’m convinced the Ollie Halsall style jazz scale runs on Po’ Beef are Dennis’….probably! And Bill’s trumpet blasting goes up another notch here too…boy is he some player.
Time is given to reflect after the martial cacophony with the lovely jazz ballad that is Don Quixotic, and I can definitely hear the 12-string in this song, without a doubt, but Roger McGuinn it ain’t! On these more restful phases of lyrical beauty Denis puts me in mind of Terje Rypdal, and contra to that, athough this track ends in distortion and a soupçon of feedback, it remains a thing of beauty. The otherworldly feel is maintained on Adrift and we have left the city, traversing the starkly lovely hinterland and feeling the pain of the people. Stunningly evocative, Adrift shows what can be done with a basic line up of instruments of just the two guitars, with minimal bass and percussion, and some very understated clarinet from Izaak Mills to lead the track out. The ensemble set out to create a definite mood on this piece, and stick to those parameters, which must be a difficult thing to do in an improvisational setting.
Amber Waves Of Migraine relies on dissonance rather than cacophony to instil its mood, stumbling along in a dystopian nightmare of echoes and reverb and wah-trumpet. Marvellous! This is the sort of record that I can only play when my long-suffering other half is out of the house, bless her, but I wouldn’t have it any other way. Bill really lets fly on Pachinko Malice where I can also hear Halsall again in Dennis’ playing. The references I’m making are only for your guidance dear reader, as this band have constructed their own wilful and powerful sound on this beast of an album beyond any kowtowing to styles or other players.
The Dreams from Our Dear Leader are surprisingly peaceful given his many megalomaniacal pronouncements, and Jack Out The Kims (“Motherfuckers” optional!) wins track title of the album award and is a hellish racket as you might expect. Several strings died in the making of this track, although no pandas were harmed. And let’s end by Slouchin’ At The Savoy where an air of faded ersatz colonial influence mixed with Chinese percussion and Bill’s lounge-jazz trumpet from the Seventh Ring bring to a close this at times frightening and at times austere but certainly fulfilling album.
In that same alternate universe where Simon Cowell is on public trial for crimes against the soul, Iron Kim Style are the house band at the Dead Dictators’ Club, but should this group ever decide on another Five Year Agrarian Plan then a name change must be in the offing, now that his son has replaced “Iron Kim”, but I’m guessing that neither “Bewildered Panda Kim Style” or “Fat Kim Style” will be chosen somehow!
Tracklist:
1.      Mean Streets Of Pyongyang (10:32)
2.      Gibberish Falter (4:36)
3.      Po’ Beef (6:17)
4.      Don Quixotic (7:37)
5.      Adrift (7:44)
6.      Amber Waves Of Migraine (5:37)
7.      Pachinko Malice (5:10)
8.      Dreams from Our Dear Leader (3:20)
9.      Jack Out The Kims (2:34)
10.  Slouchin’ At The Savoy (2:24)
Line up:
Dennis Rea – 6-string guitar
Bill Jones – Trumpet
Jay Jaskot – Drums
Thaddaeus Brophy – 12-string guitar
Ryan Berg - Bass
Izaak Mills - Bass clarinet (1,5)
Buy this from the frequently wonderful and rarely disappointing Moonjune Records for a mere $10 (USA) or $12 (outside USA) both inclusive of P&P - another irresistible bargain folks!
at January 22, 2012