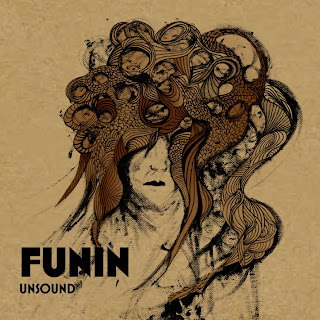 Bergen indie outfit Funin released this, their debut waxing back in November 2010 in their home territory Norway but it did not get a world release until a year later, and it seems to have gone under my radar until now, more's the pity. Undoubtedly influenced by heavyweights such as Arcade Fire, Björk, Radiohead, Portishead, they have created an interesting listen with their seven piece line up, expanded from their beginnings as a duo, and now featuring a string section and sundry electronica.

The electronic beats and sundry strangeness on Inch Of Me combined with Marit Elisabeth's elfin tones come direct from the Björk work manual but there are other things going down here, like Øyvind's lounge-jazz ivory tinkling with languid flute that lend the song its own sound.

Away from the sphere of Iceland's premier chanteuse, we have the gorgeous electro-soundscape ballad Everything initially sung by co-vocalist Gaute in the style of an angst-free Thom Yorke before swapping verses with Marit, and very nice it is too as the string section take the lead. Here it is...

Rocking Chair lurches along like a Tom Waits jazz from the dark side moment, but instead of Tom's nicotine stained growl we get more of Marit's dulcet tones, a combination that works well as handclaps and what sounds like a picked banjo bring the song to a close. Machine is not so much mechanical as menacing, eerie electronica on the beat backing Marit again, and this one has the Bristol sound of Portishead and Tricky going on, with Eastern sounding strings on top, ending with some distant piano. Strange and toe-tapping at the same time this song sums up the confidence of a band not afraid to tackle something a wee bit out there. We end with Skywalkers which starts off threatening to be an Arcade Fire style pop song but then abruptly goes deliberately awry.

All in all a confident and complex debut from a band that should go far, and indicative of the amazingly varied music scene that comes out of Norway.

Buy this here from those fine folk at Karisma Records, a label that gets more esoteric by the day!
at January 27, 2012