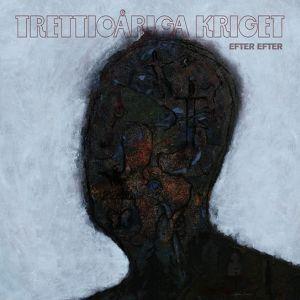 Formed near Stockholm back in 1970 Trettioåriga Kriget (Thirty Years War) were founder members of Sweden's fledgling prog and hard rock scene, and they released five albums between the self-titled debut in 1974 and Kriget in 1981 before splitting up. Long regarded as a classic of the genre, their second album Krigssång (War Song) stands the test of time well. Regarded as highly influential on latter day Swedish proggers Änglagård and Anekdoten and others, the band reformed in 2003, and 2011's Efter Efter (After After) is the third album since then and concludes a trilogy of themed releases.

I'll confess to not having heard the other two albums in the trilogy, Elden Av År (Fire Of Years - 2004) and I Början Och Slutet (The Beginning And The End - 2007) so I can't say how this album links to the other two, but suffice to say the sound they produce here is far less edgy than on Krigssång, the only other album of theirs I own, but that was put out back in 1976 so a mellowing is to be expected. That is not to say that what they have produced here is bland, far from it. Mostly guitar dominated, the songs show influences such as early ballad style Uriah Heep on The Painting, while The Dance is an instrumental in the vein of early Peter Banks dominated Yes and the lead guitarist gets to show off (but not "show off") his chops in fine style. As this lot have been around as long as the those two bands it is a moot point as to whom is influencing whom anyway.

Opener The Man On The Bench starts off with some nice, almost typically Swedish gothic sounding chords, and kudos to  the singer for not pandering to the English speaking rock audience as his native language, which he uses throughout the album, suits the mood perfectly, and I get the feeling of contemplation although I have not a clue what is being sung about, as my review copy is a download. Luckily the CD apparently comes with English translations of the lyrics, and by what I've managed to find out on the interweb there are themes of reflection and and hope, among other things. There is a rather fine guitar workout on The Man On The Bench too, and the song has all the dynamics required of an album's opening number.

My favourite number is the following track The Child (see video above) which starts with the simple but emotive theme set by Christer's guitar, a melody which he plays around and along with throughout the slowly building song, backed by Mats' keyboard's gentle waves of sound. A lyrical and uplifting solo from Christer takes us on to a reflective melancholic middle section before the dramatic conclusion where Mats gets to show some good keyboard chops, part of which remind me of Dave Stewart, not praise I would hand out lightly. Nothing groundbreaking here, but a fine example of how to put together a well structured piece of music.

This band sound like a bunch of guys who have played together for longer than they probably care to remember, and the interplay is powerful and confident without being unecessarily flashy. Mostly guitar dominated, the keyboards paint a background on a sonic canvas for the lead guitar to illustrate and embellish, but never to excess. They make accessible hard rock from a prog direction with a melodic edge, but with enough variation to keep those us who like a bit of intellectual prodding in our tunes more than happy.

I look forward to hearing more from this band in the future, and recommend this album for lovers of decent hard rock tinged prog.