Vaiping - Industrial Workers Of The World 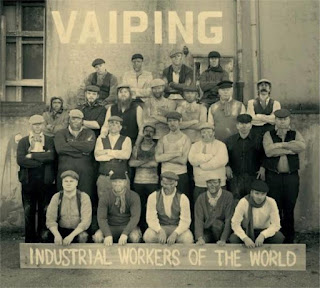 From Stavanger in Norway, industrial noiseniks Vaiping forge raw beats through the metal presses and the production line issues forth a concept album in oil-stained overalls, pounded out to the hard rhythms of the burgeoning industrial revolution in the first decades of the twentieth century.

In keeping with the imagery of the production line, the rhythm is constant and implacable, the only short respite given by the Salvation Army. The ceaseless use of robotic beats owe a large debt to Kraftwerk initially, and latterly to the more modern electronica of Depeche Mode, and musically this is an unrelenting trip along the conveyor belt of heavy industry, occasionally counterpointed by short synth melodies. Transatlantik is pure Radio-Aktivität era Kraftwerk, with a slight twist in that the German vocals are sung by the dispassionate female voice of Ann Karin Både. I'm sure I've heard the early melody line in Victory, or something very similar to it on a Kraftwerk song, and the ongoing comparison to the grandaddy of electro beats is unavoidable. The occasional vocals offer a bit of needed variety, especially the ethereal wordless vocalising on High Hopes. The album concludes with a rare example of a fully formed song, Pie In The Sky featuring a repeated and almost oriental melody in place of a chorus, fading away into the smoky firmament, before reprising the song section at the end.

I would imagine this makes for an engaging live set, given the band's reputation for dressing the part, right down to the dirty overalls, but as a piece of music to sit down and listen to it lacks something, maybe a hook here, or a dynamic there, and as such feels a bit flat. However Vaiping are interesting enough to keep an eye on in the future.