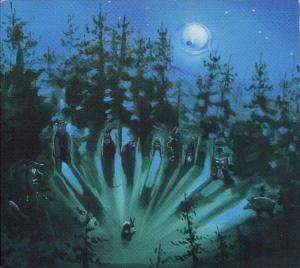 The much awaited 2010 sophomore effort from New Jersey's The Tea Club saw more of the intricate and beautiful dual lead vocals of the McGowan brothers that were such a treat on their marvellous first album, and a definite development in the song writing sees longer more intricate songs than on General Winter's Secret Museum. This time around a bass guitarist (Becky Osenenko) is employed allowing the McGowan brothers to engage in sibling geetar trade-offs in finest alt-rock mode, as is showcased on the effervescent The Night I Killed Steve Shelley. The sound is further fleshed out by the addition of Tom Brislin's keyboards, lending the whole album a more ambitious and mature sound than its predecessor. With longer songs and a longer running time, Rabbit is an album to sit down and listen to, whereas perhaps understandably, the first album had a more urgent quality about it.

Highlights are the aforementioned The Night I Killed Steve Shelley, presumably an homage to the drummer of US alt-rock scene-setters Sonic Youth, although the oblique lyrics do not point to that as far as I can tell. Sounding eerily like Jeff Buckley, Patrick McGowan tells us to "Please forgive my friend, he reads all those stories of strange lights and weather balloons", as a strange tale unfolds of what I'm not at all sure. In common with Shelley's iconic band the song veers from periods of stuttering intensity to sections of melodic calm with a natural grace that belies The Tea Club's relative inexperience.

In absolute contrast the following song Royal Oil Can is a simply gorgeous ballad of wistful longing and regret, a thing of melancholy wonderment. Following that is Out Of The Oceans which kicks off with an XTC-like guitar figure before going somewhere else entirely, led by another Jeff Buckley from-a-whisper-to-a-scream vocal from Patrick. Those three songs stand in complete contrast to one another yet also reflect what The Tea Club are all about on this consummate and sophisticated record. Their more strident moments bore comparisons to, in particular, The Mars Volta on the first album, but these are mostly left well behind on Rabbit. The band now use atmosphere as much as bluster to create their moods, although the comparison to TMV may be still justified on Nuclear Density Gauge, partly through the structure of the song and partly through the vocal phrasing.

In places the vocals take on a Thom Yorke quality, mostly when Dan takes the lead parts, and Tumbleweeds has those introspective Radiohead atmospherics we all know so well from the time when they were....well, good, back in the days of OK Computer.

The album ends with the mini-epic Astro, a tale of disillusionment, displacement....and aliens, and this is another song that relies more on atmosphere than noise to convey its meaning, although it could maybe have been a bit more dramatic, as it ends the album with a sigh rather than a statement of intent.

Mention must be made of the fine cover artwork by Kendra DeSimone, which together with the inner booklet featuring quirky drawings by Dan & Patrick makes for an all-round complete and highly enjoyable package.

As well as The Mars Volta, another obvious comparison point for any young prog band these days is the Brit prog-poppers Muse, who I'll admit to having little time for as I find their songs meandering and unfocused, and they seem to rely on gimmicks more than songwriting in order to fill the huge arenas they play in. Judging by the quality songwriting on this album the exact opposite is true with the The Tea Club, and I'd like to see them give the mega-successful Anglos a run for their money one day. If you're a fan of Muse, give this lot a try, you won't be disappointed.

The much anticipated third album is due for imminent release and I for one can't wait.