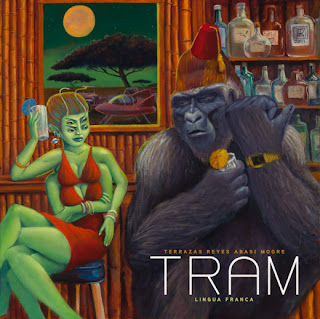 T.R.A.M. consist of members of The Mars Volta; for once not Oscar Rodriguez Lopez, but Adrian Terrazas-Gonzalez on saxophone, flute, bass clarinet and percussion, Javier Reyes and Tosin Abasi of Animals As Leaders on 8-string guitars, and Eric Moore of Suicidal Tendencies hitting the drums.

They have teamed up to make a heavy jazz prog record that is inventive and engaging and not retro in that it is not trying to sound like it was made in 1975, but still harks back to an imaginary meeting of Earthbound era King Crimson, Return To Forever and late era Soft Machine. The Lingua Franca here is the communication between heavy prog and jazz, and at only half an hour long it is more of an EP than an LP. Being so short the thing is as tight as a gnat's chuff and not a second is wasted in pointless indulgence; Adrian's main band please take note!

Storming into view with a chugging riff, squalling sax and a Latin-flavoured rhythm, Seven Ways Til Sunday changes tack to end on a light percussive led wordless vocal sequence. Things get complicated on Consider Yourself Judged that is filmic in its narrative, Eric's flurrying fills darting around Adrian's bass clarinet and sax, underpinned by a monster heavy bass; the whole thing clatters along at a pace. Ultra fast semi-damped picking by one of the Animals As Leaders boys forms the basis of Endeavour before being joined by the liquid sprawling of the other guitar in a manner reminiscent of Holdsworth or Etheridge and then by Adrian's flute. Quite mesmerising and a jazz-prog tour de force.

I'll own up to not being familiar with the music of either Animals As Leaders, or Suicidal Tendencies, and this makes me want to check out the former especially as these two guitarists come up with some really out-there moments between them. However, I do know all about The Mars Volta, and this ain't nothing like that band. I'm also familiar with main man Oscar's solo work, and while a lot of that is identifiable as coming from the same place as MV, Adrian has gone off in an altogether more jazz tinged direction on this album.

Longest track HAAS Kicker reminds me of seminal Brit fusion pioneers Nucleus, not so much musically but in the way its arrangement comes across. Orchestral in nature this is probably the most traditional thing on the record, but it still kicks ass. Northettes style vocalisations pervade Hollywood Swinging where Eric is a human whirlwind and the breathy saxes slow to a stop. The record ends with Inverted Ballad which does what it says on the tin, but in a very odd time signature indeed, led by the lovely effects-free picking of one of the guitarists.

The only problem with this album is its length, or lack of it. More, please! Highly recommended for fusion fans.