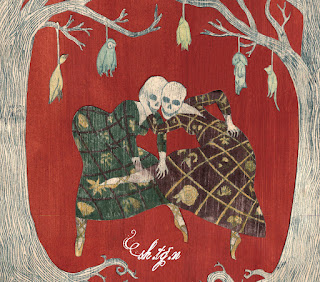 MoonJune Records are a label who love to take risks with hitherto little-known bands from all corners of the globe. A linking theme seems to be jazz-fusion or jazz-rock, either as the main element or as a fairly large influence.

Claiming to be "Psychotic Pompous Contemporary Heavy Metal" on their website, Sh*tg*n (pronounced, maybe disappointingly, "Shotgun") take the MoonJune template and shred it with an angle-grinder before gleefully dancing on the remains. To say this album is atypical of this fine label's output is somewhat of an understatement!

This band are undoubtedly heavy metal, but in a genre with as many confusing sub-strata as the Ganges Delta has tributaries, these angry Belgian loons seem to have created their very own niche. Name me another metal band that prominently features the vibraphone, if you can. I'm no expert in this murky nether region of rock'n'roll, but I'm guessing there aren't any. This strange coming together of jazz, punk, metal, and modern classical is the result of the very different backgrounds of the players, whom, as it says in the press release, just want to "let it all out".

The blackly humourous cover above and the track titles below give more than a hint of the vituperative nature of this odd band, who along with the vibraphone and electric piano feature the standard rock band line up that provides the backing for the idiosyncratic lead vocals of Fulco Ottervanger, who, in his high-register voice sometimes sings, fairly often screams, and occasionally delves into cookie monster territory. Imagine if you will Bon Scott doing a barbed-wire gargling version of Whole Lotta Rosie - Fulco's style takes a bit of getting used to, for sure. When he sings rather than shreds the band deliver a hard rock/punk/jazz-metal hybrid that shows the influence of Black Flag and the heavier side of The Mars Volta, but with less unnecessary convolutions in the time signature department than the alt-prog behemoths. The compositions here can be complex or straightforward or a combination of the two, but you could never accuse this group of being pretentious.

Recorded live with no subsequent edits or overdubs, the obviously very well-rehearsed musicians are given free reign to express themselves, and their wildly different backgrounds - band leader and keyboard player Antione Guenet has played with fusion band The Wrong Object for example - clash together in a maelstrom of metallic righteous anger. Or, to put it another way, if John Coltrane was a vibraphone player and he had invented heavy metal, it might have sounded like this.

While 99% of metal bands these days, that I'm aware of at least (ok, that's not many I'll admit, metal not being my particular poison of choice) tend to go in for low-register grunting and downtuned guitars, this lot go in for high-register screeching and normally tuned guitars, and it does make a refreshing change to an over-used and tired formulaic approach that was probably one of the reasons Opeth so spectacularly changed tack on their last two albums.

Yannick de Pauw shows that he can deliver more than just fast'n'slow slab riffing with a solo dipped in all kinds of psychedelic substances on A Glimpse Into Eternity (hear it up there ^) that puts me in mind of Omar from The Mars Volta.  This song shows that there is far more to this odd bunch than dull metal cliché, and for me it is one of the more likeable tracks from the album.

The most visceral of the lyrics are reserved for Esta Mierda No Est Democracia, a song with a Spanish title (This Shit Is Not Democracy) part sung in French and Dutch, as if trying to throw us off the scent. Actually, stench is probably a better word as the song rants and rails, with choice bursts of venom like "..with their brainless ideas you get nothing but crap coming out of their fucking mouths" being one of the more printable translations from this fiery sermon against the austerity cuts and capitalism in general (I think!). Don't you just wish you still had that youthful exuberance?! A very Black Flag influence abounds on this particular ditty, the riff in particular.

A youthful punky attitude is apparent throughout, and this is probably an album the younger listener would appreciate more than me, although there is something here for any lover of out-and-out spleen-venting set to suitable angry noises. If MoonJune are looking at attracting a younger customer, then this may well be the album to do it.

Find out more at MoonJune Records