This will be first in a series of "catch up" reviews, where for one reason or another a growing CD pile has been allowed to partly obscure the right side of the monitor on my desk. Numero uno in the tidy up is Bani Ahead by Slivovitz. Enjoy! 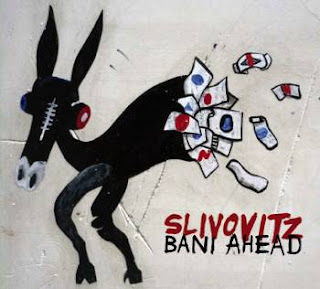 Not so much jazz fusion as a jazz rock orchestra, Italian band Slivovitz released this, their third album and second on MoonJune Records last year to widespread acclaim, and it now falls to me to follow the praise others have heaped on this fine album.

The eight songs on Bani Ahead were written between 2009 and 2011 and were recorded almost entirely live at Zork Studio in Buccino in south western Italy and mixed by Peppe de Angelis at his studio in Sorrento, which is a truly beautiful part of the world to work in, the lucky sod!

The strange cover picture above may well vindicate the Romanian translation of the album title as "Money Ahead", who knows? If not, blame Google Translate!

Now for the important part, the music. Featuring a mixture of European, American and ethnic flavours, the opening song Egiziaca gallops into view trading syncopation between the guitar and the brass leading to a becalmed middle section where the trumpet echoes Miles Davis over eerie atmospherics,the drums hitting various off-beats to up the tempo as the intensity slowly rises before the tune is taken off the cooker and served up al dente with a skewed reprise of the opening theme taking us through to the close, starring some frenzied harmonica blowing. The harmonica gives the band a fairly unique weapon in its arsenal, as off the top of my head I can't think of another band that uses the instrument in the genre. This song serves as an indication of what is to come, a stew featuring many ingredients and not just those confined to jazz rock, as evinced by the Eastern tinges of Cleopatra Through, a thoroughly joyous romp in the desert, in 5/4 no less.

Having been around for over 10 years, Slivovitz are no slouches when it comes to tight ensemble playing, the preferred format here to soloing, which, when it occurs is mostly kept short and to the point. Whereas the opening two songs are lively affairs, Fat is a gorgeous slow-building European jazz-folk ballad with bags of soul, featuring some subtle and lovely guitar picking and swathes of very filmic orchestral backing, climaxing in a short and restrained guitar break. This could well be a soundtrack to an imaginary movie.

Latin inflections abound on the slow-burning Vascello, and some highly complicated time signatures on 02/09 remind me of Canterbury fusion. 02/09 gets heavy in an almost Crimsoid fashion at one point, showcasing the group's diversity; a love of stylistic flourishes that does nothing to lessen the overall cohesiveness of the album. Opus Focus is something that wouldn't have sounded out of place on Terje Rypdal's Vossabrygg, a strangely dark piece of avant-jazz soundscaping, and the following title song is a complete contrast being a sturdy Balkan dance number, the fast orchestration replaced by some gritty guitar before a choogling sax break. The ending sounds like one of those New Orleans funeral marches before speeding up to a cossack styled fury, stopping suddenly; all that was missing was voices shouting "Hey" at appropriate intervals!

Slivovitz is also a Balkan beverage we would call plum brandy, and like that drink the album is a heady confection that will get you dancing in no time at all. In conclusion this is a really interesting and fun record, and a must for all lovers of jazz rock.

Listen to more, and buy at MoonJune Records