"Rollin' and tumblin' ain't done me no harm" 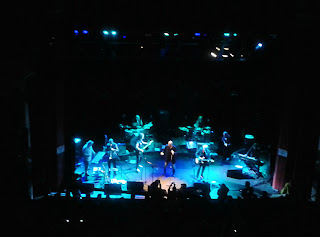 A fine day out in the capital for Phil W and me accompanied by our better halves was topped off by a blinding performance from Family, reformed to celebrate 40 years since their original demise. While the girls went off to Leicester Square to watch Russell Crowe et al in the film version of Les Miserables, we moseyed on down the Central Line to Shepherd's Bush and into the rather fading glamour of The Empire. Once past the over-zealous goons on the door whose anti-Jihadist training is wasted on a rock'n'roll venue, we climbed up to the top tier and the church pews that pass for seats up there, offering ample leg room for anyone under about 5 foot 2 inches tall.

This gig ties in with the release of the career-spanning box set referred to in detail in the YouTube interview below, which was shamelessly promoted downstairs in the foyer, and before and after the support act from the stage. One punter informed us when asked if he was going to buy it that "it would be bad form not to", and fair enough, if you can afford the £125 asking price it is a very well put together archival release. For once, it is hard to glean which came first; the idea to reform for these one-off shows, or the idea for the box. A chicken and egg situation if ever there was one

The support act was one Papa George, out of Barnes, SW London via Clarksdale, Mississippi. Banging out John Lee Hookerisms to the max on his National Steel, he was entertaining enough, and certainly knew his place, more than once telling us how good the headliners had been the previous night. As PW said, "he passed the time". 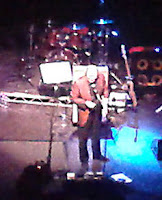 After a short break, the first surprise of the evening was given by the appearance of Frank Worthington, who along with the likes of Rodney Marsh, Stan Bowles and Tony Currie formed a quartet of "rock star" maverick footballers in the early 70s, taking their cue from the guy who made the template, and to this day by far the best footballer I have ever seen, one George Best.

Anyway, I digress...strolling onstage with the bearing of an aged outlaw, 70s rock'n'roll footballer and fellow Leicester legend Frank Worthington introduced the band in the manner of the true fan he is, telling us twice in well lubricated tones what a great time he was having. There was obviously a good ol' party going down back stage.

The band saunter on to a rousing cheer and launch into the intro to Top Of The Hill, and not long after on shambles Roger Chapman to an even bigger greeting from the packed crowd.

Family were a strange band, and admitted as much in a song of the same name released as a single waay back in 1970. Neither prog nor folk, nor hard rock nor R&B (original and true definition), but an odd hybrid of all that and more. About the only band of the era who shared a similarly booze rather than drug-fuelled audience were The Faces, but Family had more strings to their bow than the ex-mods.

Although Family amassed a moderately large and loyal following they never made the step up to the major league their talents deserved, and disbanded in 1973, ironically enough a year that would turn out to be the peak year for the underground scene they came from. Maybe had they hit top form not in 69-72 but in 1973, who knows?

Of course, 99% of Family's songs were Chapman/Whitney compositions and guitarist Charlie Whitney was not here, and Chappo's almost first words to the audience after the first song ended were a good-humoured "Whitney, where the fuck are ya? Playin' yer bouzouki and eating kebabs in Greece?" As the interview below explains (from about 6:55 onwards), he wasn't up for it and all the work needed in preparation, and given his settled lifestyle in sunnier climes, who can blame him?

Showcasing songs that ranged from folksy to hard rock to barroom belters to almost prog constructs and all points in between, the ensemble were so obviously having such a great time the infectious joie-de-vivre of both band and audience instantly fed off one another. 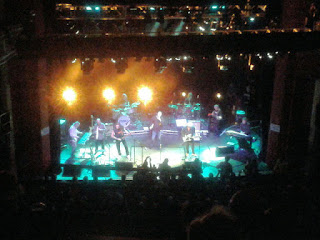 The 2 permanent members, Chappo and drummer Rob Townsend, who go right back to pre-Family 60s R&B combo The Farinas (a name that to me sounds like a failed prototype for the Ford Cortina!); and slightly later entrant Poli Palmer on astonishingly good vibes and brief member Jim Cregan on rhythm and occasional lead guitar were joined by those Chappo referred to as "the In-Laws", starring Nick Payn (of Bill Wyman's Rhythm Kings) on sax, clarinet, flute and harmonica, whose cool blowing lent the band an almost Canterbury air at times, and who for me was the musical icing on the cake.

Joining Nick were Geoff Whitehorn on lead guitar and Gary Twigg on bass, both from Roger Chapman's Shortlist, John Lingwood on drums & percussion ex of Manfred Mann's Earthband, and multi-talented session man, composer and arranger Paul Hirsh on keyboards; all seasoned pros to a man who collectively belted out the tunes with panache.

Roger Chapman is possessed of a unique and fearsomely powerful larynx, which even after all this time is still well capable of hitting the spot, apart from once jokingly saying "Thank fuck for that!" when the crowd took over a high note he was straining for. 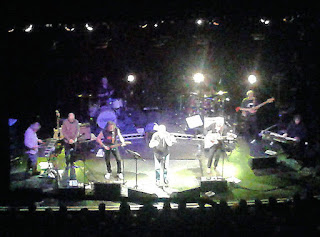 Chappo stalks the stage like a garrulous drunk uncle, good humorously effin' and blinding. Understandably the manic idiot dancing of yesteryear is reduced to playing air-keyboards and air-guitar now and again while prowling the stage, but I only hope that should I make it to my eighth decade on the planet that I have even half his energy.  "Have you all come a long way?" he asks. "Yeah!" shout a good proportion of the crowd. "I hope yer miss yer fuckin' train" replies our glorious ringmaster, to much hilarity. "It's been fuckin' 'ard work, we've been abstaining for 2 weeks, but we're going to have a fuckin' party after, join us in the bar."

The hard work paid off, with only one missed cue that I could spot, at the end of the rather tricky Hung Up Down, not that it mattered. During instrumental Crinkly Grin, Chappo went off for a breather, returning at the end to josh "Instrumentalists - 'oo fuckin' needs 'em?" Perhaps not family entertainment, but definitely Family Entertainment!

We all shouted ourselves hoarse, belting out the lyrics to the band's one big hit, the white-boy funk extravaganza Burlesque. In my opinion only the mighty Zep topped that in the whitey-on-the-one stakes back in the day with Trampled Underfoot, but Family did it 3 years earlier. Other shoutalongs included In My Own Time and encore Sweet Desirée, all delivered with gusto by both band and audience.

A yearning Between Blue And Me is wistfully dedicated to Whitney and his Grecian blue skies, and beyond Chappo's earlier barbed references to his mate, the love and respect he holds for his songwriting partner is obvious for all to see.

Chappo concluded the gig with a heartfelt tribute to absent past members, some no longer with us, who made up the Family, naming James King, John Wetton, Rick Grech, Tony Ashton, John Weider, and not forgetting Whitney (always referred to by surname), whom he asked to come back and suffer the English cold.

A powerful and joyous evening, Chappo leaves with a final "Goodbye", and Family is put to rest.


Setlist: (e&oe!)
Top of the Hill
Drowned in Wine
Holding the Compass
Part Of The Load
Ready To Go
Crinkly Grin
Burning Bridges
No Mule's Fool
Sat'dy Barfly
Between Blue And Me
Hung Up Down
Burlesque
In My Own Time
Encore 1: Weaver's Answer
Encore 2: My Friend The Sun, Sweet Desirée
at February 03, 2013